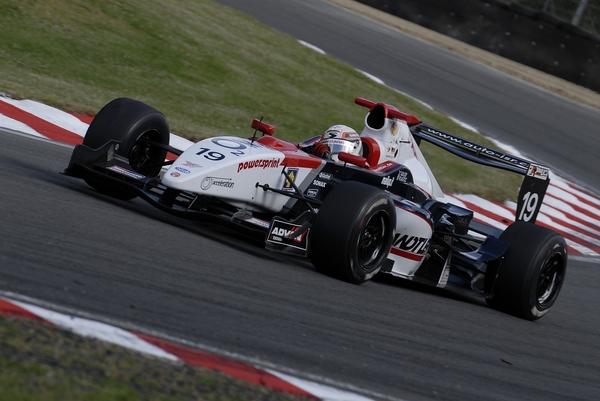 Tim had mixed feeling about his return to Brands Hatch. Friday brought a sensation of déjà-vu, as he was already familiar with the 1.93km reduced-length circuit from the Formula 3 Euro Series. For the qualifying session on Saturday and without any extra time for free practice, they switched to the 3.7km full-length circuit which Tim and half the other contestants had never driven on before.“The additional part of the track is very difficult,” explains Tim. “There are a lot of very fast, blind corners where you can’t see the turn-in point.” At least it wasn’t necessary to make many changes to the setup. “We’d managed to get it just right for both track configurations.” Learning the track was the lesser of his two qualifying problems. As there were only two sets of tyres available, Tim had to use the first of these to familiarise himself with the track. “When I finally fitted the second set, yellow flags and traffic prevented me from getting in a flying lap.” Consequently, he had to settle for 20th on the grid.Even the beauty of the circuit couldn’t compensate for that disappointment. “It’s a fabulous track,” says Tim. “Brands Hatch is traditional race track with plenty of fast sections. It is undulating and makes great demands of a driver. Most modern circuits have a staccato design which is supposed to make it easier to launch passing manoeuvres. But Brands Hatch has a superb flow to it which makes for a really enjoyable drive.”And it’s also possible to move up the field, as Tim demonstrated in the first race, managing to improve from his P20 start to finish eighth. “It was possible to overtake, but it was difficult if the man in front was smart and didn’t lose speed,” concedes Tim. “But I was lucky to the extent that quite a few of the drivers ahead of me had to retire.” On the final few laps, Tim was tailing the car running eighth for pole position in the second race. “On the last lap, I attacked but it wasn’t enough.” As things turned out, that didn’t matter, since a disqualification was to secure Tim the pole for Sunday anyway.This time, he intended to make more of the opportunity than he had at Estoril where he also started from pole but could only manage third spot on the podium. “I got off to a great start and managed to shake off my pursuer.” But a safety-car phase was to negate his advantage. “After the re-start, I managed to get away from everyone again and I had a one-second lead on Michael Ammermüller. But then I probably pushed that little bit too hard, and on a fast right-hander, I went up on the grass with one of my rear tyres.” The resulting spin brought his race and his hopes of victory to a premature end. “If it hadn’t been for that, I could clearly have won the race,” says Tim with evident frustration. All the same, this weekend’s outing at Brands Hatch has fired him up for his home race in Oschersleben. “We’ve shown that we’re making headway and that Estoril wasn’t a flash in the pan,” says Tim with satisfaction. “After the last race, I said that I was capable of more than third place and I almost proved it here.”Press Contact: Stephan Heublein Tel: +49 (0)89 500 948 84 Email: redaktion@adrivo.com adrivo Sportpresse GmbH Liebenauer Hauptstrasse 106/6 A-8041 Graz Tel: +43 (0)316 915 252 Fax: +43 (0)316 915 253 Email: info@adrivo.com www.adrivosportpresse.comAbout adrivo Sportpresse GmbH: adrivo Sportpresse GmbH publishes at www.adrivo.com one of the most popular motorsports online magazines. The website reaches a core fan base in Germany, Austria and Switzerland. It captures all the magic and glamour of motor racing, bringing its visitors compelling reports from all the different championships. The company also runs the official websites of Michael Schumacher and Formula One star Nick Heidfeld as well as working in close cooperation with some of the major figures in international motor racing. Furthermore, adrivo Sportpresse GmbH provides and distributes high quality editorial motorsport content. The flexible and customizable content portfolio is available in up to 10 languages. The clients include relevant on- and offline media like Spiegel, AutoBild, T-Online, Lycos etc. as well as companies that sponsor motorsports like DHL, Bridgestone, Dunlop, Aral and many more. Through adrivo.com and our client’s adrivo media network we reach around 4,5 million motor racing fans each month. Our content has become very influential and an opinion maker in Germany, Austria and Switzerland!

You can edit or delete your press release Tim Sandtler: Continuing to make headway here

09-02-2008 | Sports
adrivo Sportpresse GmbH
Formula One news: Senna still without F1 contract
The F1 race calendar is building up to its finale and the silly season reaching a climax as the countdown begins for the Italian Grand Prix at Monza. One face that could be slotting into the 2009 drivers’ group photo in Melbourne is that of Bruno Senna. Toro Rosso, Williams, BMW Sauber - his name has been bandied around in connection with all of them. “All I can say at
08-25-2008 | Sports
adrivo Sportpresse GmbH
Motorsports-Magazine: Räikkönen's fire goes out
Kimi Räikkönen and Nick Heidfeld, two former Sauber team-mates, have come in for some hefty criticism. "Kimi needs to shift up a gear. If he carries on in this fashion, Formula One will simply shred him," warns former F1 driver Christian Danner in an interview with Motorsports-Magazine.com. The form of Räikkönen's team-mate Felipe Massa is improving all the time, which has attracted praise from his patron Peter Sauber. "He outclassed Hamilton
08-04-2008 | Sports
adrivo Sportpresse GmbH
Philipp Eng: Pastures New In Hungary
Philipp is back into his race rhythm. Two weeks ago, Hockenheim was the venue for his return to Formula BMW Europe; in Hungary, he continued his re-acclimatisation on an unfamiliar circuit. Unfortunately, he had to contend with obstacles of a varied nature, ranging from technical problems to other vehicles. What went right and what went wrong? A retirement and a P18 don’t exactly resemble a victory parade, yet Philipp is confident that
07-16-2008 | Sports
adrivo Sportpresse GmbH
Tests at Hockenheim, enough of Barcelona
Between 1992 and 2008, there was no Formula One testing at Hockenheim. Last week, the teams made their return in preparation for the German Grand Prix. According to David Coulthard and Lewis Hamilton, it was not possible to do much more than work on the setup for the race weekend. “I don’t think we can learn a lot about the car here,” said Coulthard in conversation with motorsports-magazine.com. “It’s not

10-09-2008 | Sports
adrivo Sportpresse GmbH
Tim Sandtler: Duelling In The Park
An exciting season in the Formula Master series came to an equally exciting conclusion in the royal park of Monza. In the first race, cars went flying in all directions on the historic circuit and the number of laps where the safety car was not leading the way were in the minority. Tim was one of the few drivers who kept his cool and avoided getting involved in any of the
09-25-2008 | Sports
adrivo Sportpresse GmbH
Tim Sandtler: Matching The Leaders For Speed
An exciting track, P3 in qualifying and a spectacular chase in Sunday’s race: Imola came so close to providing the long-awaited success for Tim. “Things were looking so good,” he says wistfully. “It’s all the more annoying to know that you could have been up there with the front-runners on your own merit.” But it wasn’t to be. In free practice, Tim immediately adjusted to the new track despite the
07-16-2008 | Sports
adrivo Sportpresse GmbH
Tim Sandtler: First Breath Of Podium Air
As the season reached its halfway point in Estoril, Tim found himself on the podium for the first time in his Formula Master career. In qualifying, he already had the strong feeling that he and his team were starting to get things right. “The characteristics of the Estoril circuit are actually quite similar to those of Valencia,” says Tim. “The track surface is very rough and aggressive, so I had
06-04-2008 | Sports
adrivo Sportpresse GmbH
Tim Sandtler: The Streets Of Pau
Place: Pau (France) Dates: 30th May - 1st June 2008 Track length: 2,76km Race 1 Grid Position: 15 Result: 10 Race 2 Grid Position: 10 Result: 22 Monaco, Macao, Pau. Star-studded, glamorous and technically demanding – street circuits hold a special fascination for the motor racing world. One thing that all street circuits have in common is the virtual impossibility of staging an overtaking manoeuvre, particularly in rainy conditions when the risk of an accident increases dramatically. But that wasn’t going to stop Tim Sandtler doing
05-20-2008 | Sports
adrivo Sportpresse GmbH
Tim Sandtler: Catch-up in the rain
Race weekends are a law unto themselves and every race track has its own peculiarities. Just two of the lessons that Tim will be taking away with him from the opening Formula Master event in Valencia. During the winter tests, Tim was up with the front-runners right from the start. Even when he briefly got behind the wheel for the first test in Monza, he was amongst the leading group.
05-20-2008 | IT, New Media & Software
Orga Systems GmbH
Orga Systems selected for TIM MVNO billing
Paderborn, Germany/Rome, Italy, 15. May 2008. Orga Systems has supplied Telecom Italia with its fully convergent real-time billing platform OPSC Gold to power MVNOs and enable multi service provider support. With regards to this growing market opportunity, two elements are essential: rapid service offerings and top performance. Therefore, TIM Italy builds on Orga Systems’ internationally recognized real-time billing expertise. All processes are managed within this one system - whether wholesale
Comments about openPR
Your portal is fast, simple, and easy to use. Others may have more functions but they also demand more editing time, you have to preformat the text in order to achieve a good result etc. I think openPR is really fantastic!
Andreas Knepper, wallmedien AG