Tim Sandtler: The Streets Of Pau 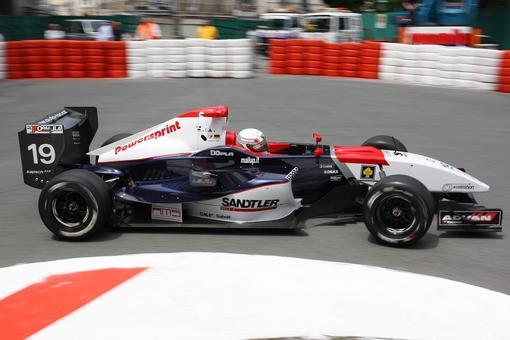 Place: Pau (France) Dates: 30th May - 1st June 2008 Track length: 2,76kmRace 1 Grid Position: 15 Result: 10 Race 2 Grid Position: 10 Result: 22Monaco, Macao, Pau. Star-studded, glamorous and technically demanding – street circuits hold a special fascination for the motor racing world. One thing that all street circuits have in common is the virtual impossibility of staging an overtaking manoeuvre, particularly in rainy conditions when the risk of an accident increases dramatically. But that wasn’t going to stop Tim Sandtler doing his damnedest in the first race of the International Formula Master in Pau.“It’s almost impossible to overtake in Pau,” says Tim emphatically. “If the man in front doesn’t make any errors, there’s no way you’re going to get past.” All the same, he managed to work his way up on a wet track from 15th on the grid to finish tenth. “You have to use your common sense here, otherwise you come unstuck,” he says, explaining his recipe for success. In the rain, it is very slippery and difficult to find the right line. Tim overcame the tricky conditions and, with his tenth place, set himself up well for the second race.But on Sunday, Tim was out of luck as his engine stalled on the starting line. “When the third red light went out, my rev counter dropped away dramatically and the engine abruptly cut out, even though I’d completely disengaged the clutch. It wasn’t a case of me killing the engine; it was a technical fault.” The consequence was that he then had to catch up the rest of the field. But the pursuit came to an untimely end as a traffic jam at the hairpin led to a chain reaction. Tim’s car took a bump from behind and was pushed into the car in front. This resulted in a dented front wing, an unscheduled pit stop and to being lapped by the leaders. “That was essentially the end of my race.” When he tried to leave the pit, the technical problem returned: “I wouldn’t have got going again if I hadn’t had a shove from my mechanics.” Tim sees the weekend as a mixed bag: “Unfortunately, things didn’t work out too well. It’s always difficult to overtake on a street circuit. Even so, I managed to make up a few places in the first race. Points were there to be won in the second race if I hadn’t had the technical problem on the starting line and if it hadn’t been for the collision which wasn’t my fault anyway.”All the same, he really enjoyed his outing on the streets of Pau: “This circuit is terrific fun and it’s certainly a great challenge with its uphill and downhill sections and even a roundabout to negotiate. Urban circuits are always fantastic experiences and Pau is one of the best and most authentic. Compare it with the Norisring where there are only three real corners. Having said that, though, Pau is starting to show its age. The circuit is quite dangerous in parts. The surface is bumpy and uneven; you practically have to weave your way round it. They really ought to do something about it.”Press Contact: Stephan Heublein Tel: +49 (0)89 500 948 84 Email: redaktion@adrivo.com adrivo Sportpresse GmbH Liebenauer Hauptstrasse 106/6 A-8041 Graz Tel: +43 (0)316 915 252 Fax: +43 (0)316 915 253 Email: info@adrivo.com www.adrivosportpresse.comAbout adrivo Sportpresse GmbH: adrivo Sportpresse GmbH publishes at www.adrivo.com one of the most popular motorsports online magazines. The website reaches a core fan base in Germany, Austria and Switzerland. It captures all the magic and glamour of motor racing, bringing its visitors compelling reports from all the different championships. The company also runs the official websites of Michael Schumacher and Formula One star Nick Heidfeld as well as working in close cooperation with some of the major figures in international motor racing. Furthermore, adrivo Sportpresse GmbH provides and distributes high quality editorial motorsport content. The flexible and customizable content portfolio is available in up to 10 languages. The clients include relevant on- and offline media like Spiegel, AutoBild, T-Online, Lycos etc. as well as companies that sponsor motorsports like DHL, Bridgestone, Dunlop, Aral and many more. Through adrivo.com and our client’s adrivo media network we reach around 4,5 million motor racing fans each month. Our content has become very influential and an opinion maker in Germany, Austria and Switzerland!

You can edit or delete your press release Tim Sandtler: The Streets Of Pau here