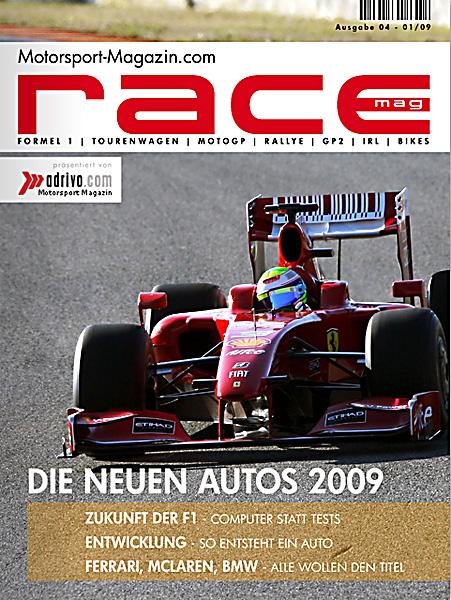 Germany’s popular dedicated motorsports magazine ‘adrivo.com’ is gearing up for the new Formula One season. Sporting a new logo and fresh livery, the magazine will now be published under its new name: Motorsport-Magazin.com.According to the latest survey by AGOF (Study Group Online Research) ‘internet facts 2008-III’, the magazine achieves a net reach of 120,000 persons per month, and that’s just in Germany. In total, Google Analytics measures ~ 1 million visitors and ~ 10 million page impressions each month.The internet portal went online in 1997, since when it has established itself as an opinion maker in Germany, Austria and Switzerland. Exclusive stories from the track, penned by a 30-strong editorial team who are not only expert but also passionate about motor racing, ensure in-depth analysis tempered by humorous insights. Videos, galleries, databanks full of results and statistics as well as a wide community of enthusiasts complete the varied and fascinating Motorsport-Magazin.com package.Based both in Munich (Germany) and Graz (Austria) the magazine’s publishers, adrivo Sportpresse GmbH, also operate the official websites of Michael Schumacher and Nick Heidfeld.About adrivo Sportpresse GmbH: adrivo Sportpresse GmbH publishes at www.Motorsports-Magazine.com one of the most popular motorsports online magazines. The website reaches a core fan base in Germany, Austria and Switzerland. It captures all the magic and glamour of motor racing, bringing its visitors compelling reports from all the different championships.The company also runs the official websites of Michael Schumacher and Formula One star Nick Heidfeld as well as working in close cooperation with some of the major figures in international motor racing.Furthermore, adrivo Sportpresse GmbH provides and distributes high quality editorial motorsport content. The flexible and customizable content portfolio is available in up to 10 languages. The clients include relevant on- and offline media like Spiegel, T-Online, Lycos etc. as well as companies that sponsor motorsports like DHL, Deutsche Post World Net, Bridgestone, and many more.Through Motorsports-Magazine.com and our client’s adrivo media network we reach around 4,5 million motor racing fans each month. Our content has become very influential and an opinion maker in Germany, Austria and Switzerland!Press Contact: Stephan Heublein Tel: +49 (0)89 500 948 84 Email: redaktion@adrivo.comadrivo Sportpresse GmbH Liebenauer Hauptstrasse 106/6 A-8041 Graz Tel: +43 (0)316 915 252 Fax: +43 (0)316 915 253 Email: info@adrivo.com www.adrivosportpresse.com

You can edit or delete your press release adrivo.com becomes Motorsport-Magazin.com here

04-27-2009 | Sports
adrivo Sportpresse GmbH
iSport plans F1 entry
GP2 team boss Paul Jackson is planning to bring his iSport stable into Formula One in the event that spending is capped from the 2010 season. Jackson revealed his intention in an exclusive interview with Motorsports-Magazine.com: “I aim to give a few people in F1 a kick up the backside and to show them that they are chucking money out of the window for nothing.” But the precondition for any Formula
03-14-2009 | Sports
adrivo Sportpresse GmbH
New motorsport magazine goes on sale
Following the recent rebranding of the popular and influential motorsport website "adrivo.com" to "Motorsport-Magazin.com", operator adrivo Sportpresse GmbH have come up with a fresh surprise as the racing season gets underway. The 30-strong editorial team led by Stephan Heublein and Falko Schoklitsch is now to publish a new, monthly German "Motorsport-Magazin" in print format. This will be distributed via Mountains Publishing with adrivo Sportpresse GmbH having full responsibility for the
10-09-2008 | Sports
adrivo Sportpresse GmbH
Tim Sandtler: Duelling In The Park
An exciting season in the Formula Master series came to an equally exciting conclusion in the royal park of Monza. In the first race, cars went flying in all directions on the historic circuit and the number of laps where the safety car was not leading the way were in the minority. Tim was one of the few drivers who kept his cool and avoided getting involved in any of the
09-25-2008 | Sports
adrivo Sportpresse GmbH
Tim Sandtler: Matching The Leaders For Speed
An exciting track, P3 in qualifying and a spectacular chase in Sunday’s race: Imola came so close to providing the long-awaited success for Tim. “Things were looking so good,” he says wistfully. “It’s all the more annoying to know that you could have been up there with the front-runners on your own merit.” But it wasn’t to be. In free practice, Tim immediately adjusted to the new track despite the

07-13-2017 | Advertising, Media Consulting, …
ReportsWeb
Luxury Goods in Germany
Luxury goods enjoyed further positive growth in Germany in 2016, with volume and value sales increases seen in all nine categories covered by Publisher. The highest overall growth was seen in the rather young category of luxury portable consumer electronics, while the slowest growth was reported in the rather old-fashioned category of luxury writing instruments and stationery. Ultimately, the current value growth rate registered across luxury goods in 2016 was
06-08-2017 | Business, Economy, Finances, B …
ReportsWorldwide
Agrochemicals Market in Germany
ReportsWorldwide has announced the addition of a new report title Germany: Agrochemicals: Market Intelligence (2016-2021) to its growing collection of premium market research reports. The report “Germany: Agrochemicals: Market Intelligence (2016-2021)” provides market intelligence on the different market segments, based on type, active ingredient, formulation, crop, and pest. Market size and forecast (2016-2021) has been provided in terms of both, value (000 USD) and volume (000 KG) in the report. A
12-07-2016 | Business, Economy, Finances, B …
ReportBazzar
Packaged Food in Germany
Summary Retail value sales of packaged food continued to grow in Germany in 2016, as was the case in all years of the review period from 2011 to 2016. The last time a decline took place was in the context of the global economic and financial crisis and the following recession in 2010. In the context of the review period as a whole, the 2016 development was slightly below average, although
11-10-2016 | Health & Medicine
Industry Research
Laparoscopes Market 2016 - Stryker (USA), Henke-Sass Wolf (Germany ), Aesculap ( …
Laparoscopic surgery uses a special instrument called the laparoscope. The laparoscope is a long, slender device that is inserted into the abdomen through a small incision. It has a camera attached to it that allows the obstetrician–gynecologist (ob-gyn) to view the abdominal and pelvic organs on an electronic screen. If a problem needs to be fixed, other instruments can be used. These instruments usually are inserted through additional small incisions
11-05-2008 | Science & Education
educationconsult
MBA - Market Germany
The MBA degree is becoming increasingly more important for career opportunities of young professionals and managers in German- speaking countries. Simultaneously, there is a wide variety of MBA programs and it is strenuous to find the exact program desired. Educationconsult is glad to give you a short overview regarding the German MBA-market. Fact sheet 2009: • 72 University and 130 Universities of Applied Sciences (Fachhochschule) in Germany offer traditional Business Degrees (Diplom,
10-25-2007 | Science & Education
Sprachinstitut TREFFPUNKT
How safe is Germany?
A few weeks ago, alarmist coverage of a fight which took place during a festival in the small town of Mügeln (Saxony) was featured in newspapers throughout Germany. The incident consisted of a violent confrontation between Indians and Germans, resulting in speculation that the fight was racially motivated. Since then the question of whether Germans are racist or xenophobic has once more been the subject of vigorous discussion. However, Germany is
Comments about openPR
Your portal is fast, simple, and easy to use. Others may have more functions but they also demand more editing time, you have to preformat the text in order to achieve a good result etc. I think openPR is really fantastic!
Andreas Knepper, wallmedien AG