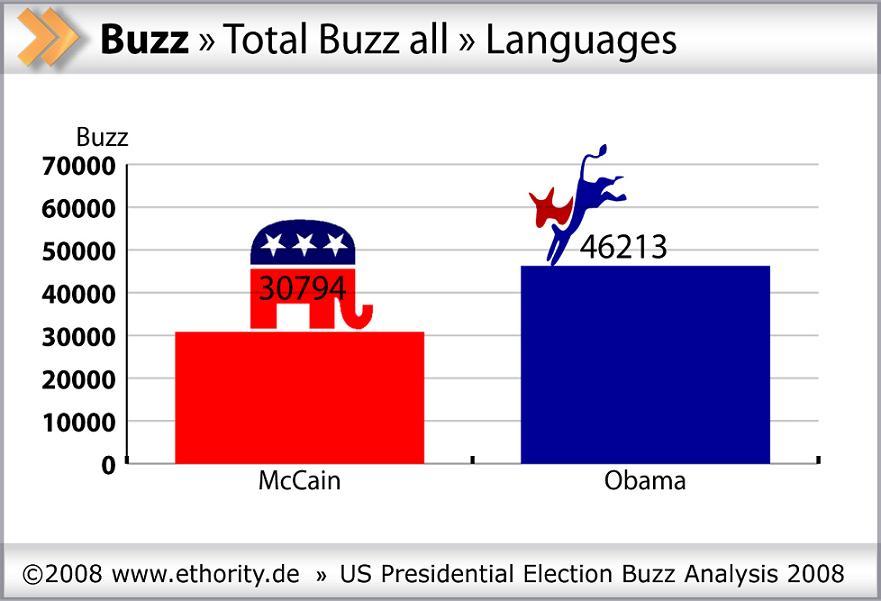 ethority analyzed around 90,000 authentic user opinions found in forums, blogs and news sites concerning the two candidates running for president of the USA. German-, English- and Spanish-speaking contributions on the internet were evaluated and show that the democratic candidate Barack Obama has a greater buzz (percentage) compared to his republican competitor John McCain. However, in terms of sentiment, especially among German- and Spanish-speaking internet users, McCain and Obama are nip and tuck. Buzz-wise both candidates’ scores are almost even throughout English-speaking contributions on the web.Never before has a US presidential election attracted that much attention and raised such an interest in Germany, as it is the case today. One of the most crucial reasons most likely to cause this effect is its strong presence on the internet. Both campaigns actively use web 2.0 services such as forums, blogs and social networks to get their “word” across. But what campaign related topics are discussed most frequently on the web and how do internet users react to or reflect those topics? How high is the buzz on the internet concerning the two candidates? Are there differences across various language areas when it comes to user opinions of Obama and McCain and their political views?David Nelles, publicist at ethority, interprets the results of the study as follows: This buzz analysis shows that campaign managers in the US are not only aware of the change of social media consumption but anticipate it. User generated communication channels are used in the USA, as well as in German- and Spanish-speaking communities, to discuss political topics related to the upcoming presidential election this November. This change of media usage should inspire German campaign managers to follow this example. If the big German parties still want to reach their voters in the future, they have to make room in their campaigns and integrate digital communication channels, because they constitute an unprecedented opportunity to participate in the decision-making process. Internet users have long reached beyond classic forms of media such as print and TV. While it was hard to form a political opinion aside from traditional media and the circle of family and friends before there was web 2.0, YouTube & Co. provide a platform with exponential growth where opinions are formed and decisions are made.Fiana de Guzman PR-ManagerT +49 (0)40.300.699.833 F +49 (0)40.300.699.844fiana.de.guzman@ethority.de xing: www.xing.com/profile/Fiana_deGuzman/ ethority GmbH & Co. KG Büschstr. 7 (Ecke Gänsemarkt) D-20354 Hamburgwww.ethority.de www.ethority.net/blog/ethority is a social media analysis company that specializes in monitoring and analyzing social media for online and word-of-mouth marketing. We emphasize our multilingual capabilities and international approach by providing multilingual market research and marketing tools in order to enhance your brand’s popularity, its sales and the target group’s conception of it. Our capabilities extend into consulting, planning and execution of word-of-mouth marketing strategies.

08-14-2008 | Politics, Law & Society
ethority GmbH & Co. KG
International Press Partners for Social Media Studies
At the moment ethority is working on a study about the US presidential elections 2008. Our database for this study is a compilation of user opinions found in social media such as forums, weblogs and newssites. These user opinions concern the two candidates Barack Obama and John McCain in general, as well as their image, climate protection, immigration policy and campaign topics such as education, trade, health, foreign and security policy.
05-20-2008 | Advertising, Media Consulting, …
ethority GmbH & Co. KG
Facebook, Myspace, LinkedIn and Xing are the major topics within the world wide …
Social networks enjoy increasing popularity with internet users. There is hardly a better way to take care of one’s personal circle of friends or business network. But which communities enjoy a good reputation with their German and English users and which do not? Which networks within the eight surveyed linguistic areas is talked about most frequently on the web? Which opportunities do network operators provide for marketers to use these
04-08-2008 | Advertising, Media Consulting, …
ethority GmbH & Co. KG
ethority Study: The Travel Trend on German Web 2.0
According to the latest studies (AGOF), more than 50% of the German internet users look for travel destinations via the internet. The ethority study about travel trends 2008 within the German web illustrates which holiday destination and which types of leave are frequently discussed in weblogs and online communities. In the course of the ethority study “Travel Trends 2008“, about 6500 user opinions have been evaluated. Concerning German users, the results