RETRO - France and Germany as Classic and Modernity 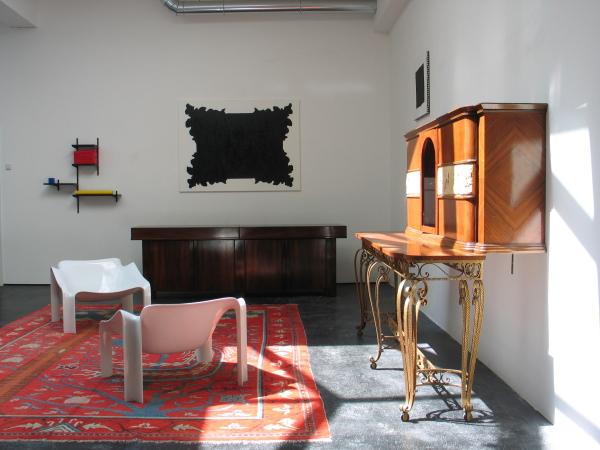 Markus Winter presents on the 25th of July “RETRO”, a show curated by Jean-Baptiste Bouvier and Markus Winter that joins France and Germany as Classic and Modernity. The etymology defines ”retro” as a way to describe aspects of modern culture derivative of certain attitudes referencing the past. The aim of this exhibition is to confront artworks and furniture in the same space. The show does not propose a manifesto; it is the personal choice of an artist and a gallerist. As a collective show, it will be presenting a selection of furniture from the 20th century as well as contemporary artworks and an Oriental carpet. The works of Nicolas Chardon, Mathieu Mercier, Richard Fauguet, Mathieu Weiler, Valérie Bouvier, Jean-François Gavoty, Jean-Baptiste Bouvier, Alexander Knych and Dominik Steiner will be presented alongside the pieces of such designers as Gio Ponti, Pierluigi Colli, Lajos Kozma, Hadji Jalili, Vittorio Introini, Paolo Buffa, Pierre Paulin, Louis Majorelle and Pevrot & Favriau. Although “retro” means retrospective, the show purports to demonstrate as well the mystic facet of the term, accepting its historical and chronologic denotation but also the poetical sense. Each piece deals with memory, personal experiences, and the poetry of ancient times. Some of the artists proceed in a conceptual direction, such as Nicolas Chardon or Mathieu Mercier; others interpret the idea with the help of humour, as shown in the works of Richard Fauguet or Valérie Bouvier. Mathieu Weiler, Jean-François Gavoty and Jean-Baptiste Bouvier utilize poetry and melancholy. Opening of exhibition: 25th July 2008 Closing of exhibition: 27th September 2008 Markus Winter, Chausseestraße 104, D- 10115 Berlin - GERMANY Tel. +49 (0) 30 97 00 46 57 Fax +49 (0)30 97 00 46 76 www.markuswinter.com For press: Bianca Limbach, presse@markuswinter.com Gallery hours: Wed – Sat 2 pm – 6 pm and by appointment Located in former East Berlin, Germany, Galerie Markus Winter was founded in October 2005. The gallery focuses on international contemporary painting, sculpture, photography and video art with a keen interest in conceptualism and progressive media. Therefore, the exhibition space is designed to accommodate each artist’s project without compromise (allowing for the flexible alteration of the overall architectural structure), and hence provides each artist with a highly individual forum. The yearly gallery program consists of eight to ten exhibitions, including solo exhibitions, as well as curated group shows. Since our first exhibition, which featured an installation by the acclaimed German video artist Marion Schebesta, we have supported progressive young and mid-career artists from Europe, Asia, and the United States, working in all media. These include: François Boué, Jean-Baptiste Bouvier, Jim Lee, Bryan Osburn and Matthew Abbott. In addition, we represent members of the Düsseldorf-based artist collective "Konsortium", such as Lars Breuer, Julio Ernesto Herrera Flores.

06-18-2018 | Politics, Law & Society
SMi Group
UK, USA, Australia, Canada, Norway, France, Thales UK, Leonardo and Babcock Inte …
The Defence Safety Conference, taking place in London on the 1st and 2nd October 2018, will feature several expert senior briefings on aviation safety and airworthiness optimisation. Air platform safety is an essential capability enabler across all military branches; conference organisers SMi Group are delighted to announce that the following speakers will all share their organisations priorities, challenges and solutions when it comes to enhancing aviation safety for the future: • Sir Simon
08-14-2009 | Arts & Culture
Bianca Limbach
Jim Lee - easy is hard
Everyday life objects that are familiar to the viewer compose Jim Lee’s sculptures, paintings and installations. As they give off the aura of “the found”, they inspire connotations linked to Arte Povera. Their basic structure is preserved, but is getting recomposed in a certain manner. Those workings could be reduced to fundamental terms as Colour, Form, Line and Shape but this statement would not cope with the sublime play of
04-08-2009 | Arts & Culture
Bianca Limbach
Group show ‘Local Paintings’ at Markus Winter in Berlin
‘Local Paintings’ is questioning the concept of the ‘international style’ in modernist art. Apart from being often associated with an individual relationship to the artwork or the focus on personal expression, the title evokes a connection between the painting and the world outside the gallery/studio walls, a relationship repressed by modernist art theory. The show confronts the work of four painters, of different nationalities, with different educational, professional and social backgrounds
01-27-2009 | Arts & Culture
Bianca Limbach
Markus Winter presents John Cake and Darren Neave aka The Little Artists in Berl …
Art as a financial product and lifestyle Both artists, hailing from Leeds, comment through their work on the "BritArt" scene based around Charles Saatchi and artists of the early 90s like Damien Hirst, Rachel Whiteread, Jake and Dinos Chapman, and Tracey Emin. They reconstruct this scene and the works of these artists through the use of toys, such as Lego figures or a Carrera racetrack. "By using children’s toys as
05-08-2007 | Fashion, Lifestyle, Trends
Clutter Busting with Brooks Palmer
CLUTTER BUSTING FOR PEOPLE OF ALL AGES
Los Angeles, CA (May 7, 2007) Clutter Busting, with Brooks Palmer, recently featured on the “Living Live!” television program. “Living Live!” is a one-hour daily live show geared towards adults 55 and up. Hosted by Florence Henderson, known worldwide to fans, as “America’s favorite mom Carol Brady,” on the classic hit TV series The Brady Bunch and Meshach Taylor, known to audiences for his Emmy-nominated portrayal of “Anthony Bouvier” for
11-22-2006 | Arts & Culture
Bianca Limbach
Rob Nadeau - Art for Wall and Floor
Having begun his career at 30, Rob Nadeau can already look back at a row of successful exhibitions in America, especially in New York. His work has been discussed in the New York Times and NY Arts as a “refreshing response to the crisis of painting in an increasingly technologically driven society.” Other than his works on canvas and paper, the artist has developed carpets Group Exhibition Maki Umehara & Rob
Comments about openPR
Your portal is fast, simple, and easy to use. Others may have more functions but they also demand more editing time, you have to preformat the text in order to achieve a good result etc. I think openPR is really fantastic!
Andreas Knepper, wallmedien AG