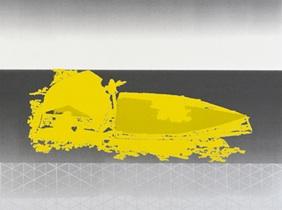 Maki Umehara - Silver Sea - Born at Nagoya, Japan in 1976 the artist Maki Umehara deals in her works with the articulation of different forms through objects. The converging of artwork and circumfluent space as well as the change in perception of material under distinct outside conditions is locating Maki Umehara’s work in adjacency of the Japanese Metabolists. So the artist maintains a close dialogue with architectonical design vocabulary. Already visible in the sculpture The 6th day, the artist tries to translate architecture sketches in three-dimensional space experience. Maki Umehara focuses less on biomorphic and hyperbolic shapes than on architectonical macro-structures that she involves in her work. Thereby, the question of dynamics of time and space is posed and by use of these vectors, the artist tries to develop each site of exposition. Through the connection of different material with an expanded colour palette, she liberates new streams and references inside the series and installations. To the viewer, the artist constantly opens new dimensions of space. Awardee of the Grafikpreis des Landes NRW 2009, Maki Umehara proved multifaceted quality as an artist. With a serigraphy called Ukifune, which means as much as “floating boat” she succeeds the amalgamation of Asian and Western influences. A theme of traditional Japanese Genji-literature of 11th century is edited in this screen print. The drama around the story of the girl Ukifune, who attempts suicide to liberate herself of an inauspicious love, is recreated in a new form of vocabulary based on formal reduction and intensive chromaticity. 21. January 2010, 6 pm January 22 - March 3, 2010 Located in former East Berlin, Germany, Galerie Markus Winter was founded in October 2005. The gallery focuses on international contemporary painting, sculpture, photography and video art with a keen interest in conceptualism and progressive media. Therefore, the exhibition space is designed to accommodate each artist’s project without compromise (allowing for the flexible alteration of the overall architectural structure), and hence provides each artist with a highly individual forum. The yearly gallery program consists of eight to ten exhibitions, including solo exhibitions, as well as curated group shows. Since our first exhibition, which featured an installation by the acclaimed German video artist Marion Schebesta, we have supported progressive young and mid-career artists from Europe, Asia, and the United States, working in all media. These include: François Boué, Jean-Baptiste Bouvier, Jim Lee, Bryan Osburn and Matthew Abbott. In addition, we represent members of the Düsseldorf-based artist collective "Konsortium", such as Lars Breuer, Julio Ernesto Herrera Flores. Markus Winter, Chausseestraße 104, D- 10115 Berlin - GERMANY Tel. +49 (0) 30 97 00 46 57 Fax +49 (0)30 97 00 46 76 www.markuswinter.com For press: Bianca Limbach, presse@markuswinter.com Gallery hours: Only by appointment

06-02-2011 | Arts & Culture
Bianca Limbach
Lampedo to sell Italian vintage design through Auctionata.com in October 2011
The specialized dealer in 20th Century furniture Lampedo will be organizing a first time online auction with Italian vintage design by important architects and designers such as Gio Ponti, Gino Sarfatti, Ettore Sottsass, Angelo Lelli and Ico Parisi. For sale will be furniture, lighting and objets d'art in glass and ceramic. Platform for this auction will be Auctionata.com the first real time online auction that holds a patent for its
08-17-2009 | Fashion, Lifestyle, Trends
Bianca Limbach
Firma London: Mid Century Design – Now in Berlin
Firma London ups the game of Berlin’s thriving retail scene and their love for unique interior concepts. Having opened in springtime in Bleibtreustrasse 50 in Charlottenburg – close to Savignyplatz – they present original design classics ranging from the fifties to seventies. Having lived in London for almost 20 years, the two founders of Firma London, Sandra Tietje and Florian von Holstein, were attracted by the challenge to introduce their
08-14-2009 | Arts & Culture
Bianca Limbach
Jim Lee - easy is hard
Everyday life objects that are familiar to the viewer compose Jim Lee’s sculptures, paintings and installations. As they give off the aura of “the found”, they inspire connotations linked to Arte Povera. Their basic structure is preserved, but is getting recomposed in a certain manner. Those workings could be reduced to fundamental terms as Colour, Form, Line and Shape but this statement would not cope with the sublime play of
05-14-2009 | Arts & Culture
Bianca Limbach
Markus Winter presents the works of Alter Carnol and Andreas Korte in Berlin
Markus Winter is proud to present the works of Alter Carnol and Andreas Korte. The two artists analyze the notion of space perception, asking basic questions about its limits and margins, examinig art’s boundaries and surpassing them at the same time. Since the 1960s, critics emphasized the dematerialisation of the object of art: the material became ephemeral, transient, of secondary importance. Contrary to this attidute denying the physical constitution of the

01-18-2018 | Business, Economy, Finances, B …
Busines-Logics GmbH
SBS Logistics achieves business agility with Infor
NewsPatrolling.com : Infor, a leading provider of industry-specific cloud applications, today announced that SBS Logistics Singapore Pte Ltd achieved significant improvement in operational efficiencies, cost savings and quality assurance with the implementation of Infor SunSystems. The Singapore-based company provides services such as freight forwarding, drayage, truck transportation and warehouse. SBS Logistics used Infor SunSystems to process order information in a timely and flexible manner, streamline business processes and enable better decision-making
10-13-2017 | Fashion, Lifestyle, Trends
Nostalgia Products LLC
Nostalgia™ HomeCraft On Tap Beer Growler System Makes An Attractive Countertop …
Drinking beer and solving problems might be what Nostalgia does best. At least that’s what we like to think. But if finishing off a keg of beer is too much to consume before that beautiful hoppy flavor goes awry, and a 64-ounce growler never makes it through the night, the new HomeCraft On Tap Beer Growler System from Nostalgia might be the answer. As the market share of the craft
06-15-2011 | Leisure, Entertainment, Miscel …
The Gab Group
RA Sushi Honors International Sushi Day with Complimentary Tootsy Maki
Palm Beach Gardens, Fla. – On June 18, 2011, RA Sushi Bar Restaurant is celebrating International Sushi Day, an informal holiday created to encourage sushi lovers around the world to eat more sushi. In honor of this special day, anyone who “likes” RA Sushi on Facebook can print a special offer good for one complimentary Tootsy Maki, redeemable at one of RA Sushi’s 25 locations nationwide. To make this holiday
02-13-2007 | Arts & Culture
PublishAmerica
PublishAmerica Presents Every Step of the Way by Yvonne Lancaster, Anne Dionne, …
PublishAmerica is proud to present Every Step of the Way: How Four Mothers Coped With Child Loss by Massachusetts authors Yvonne Lancaster, Anne Dionne, Deborah LeBouf Kulkkula and Jane Maki. This moving book is the work of four mothers who came together as strangers but were bonded together with compassion and caring as parents of children who had passed away. The purpose of the book is to share
11-22-2006 | Arts & Culture
Bianca Limbach
Rob Nadeau - Art for Wall and Floor
Having begun his career at 30, Rob Nadeau can already look back at a row of successful exhibitions in America, especially in New York. His work has been discussed in the New York Times and NY Arts as a “refreshing response to the crisis of painting in an increasingly technologically driven society.” Other than his works on canvas and paper, the artist has developed carpets Group Exhibition Maki Umehara & Rob
02-23-2006 | Business, Economy, Finances, B …
All Nippon Airways Co., Ltd.
direct/All Nippon Airways Co Ld: Re Transfer of Subsidiary
Notice Concerning Transfer of Shares of a Subsidiary Company February 23, 2006 Corporate Name: All Nippon Airways Co., Ltd. (Stock Code No.: 9202, TSE&OSE First Section) President & C.E.O.: Mineo Yamamoto Contact: Director, Administration Kan Hisamatsu (tel.: 03-6735-1001) All Nippon Airways Co., Ltd. (hereinafter ANA) resolved at a meeting of its Board of Directors on February 23, 2006, to sell all issued shares in its wholly-owned subsidiary engaged in real estate leasing,
Comments about openPR
We publish our press releases on openPR.de because we like people who are "open" - just like us.
Frank Obels, CEO, INCONET - Informationssysteme, Communication und Netzwerkberatung GmbH