Philipp Eng - German Formula 3 - The fastest on the track 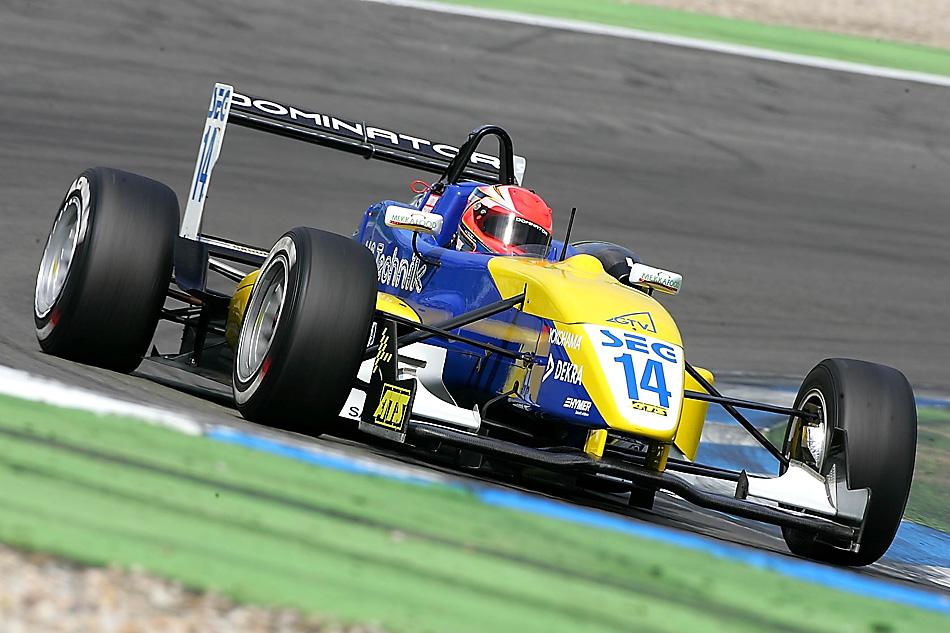 Philipp Eng at the German Formula 3 season opener at Hockenheim.

Philipp had actually been expecting his first Formula 3 weekend to turn out rather differently. With the two best test times on the Hockenheim circuit under his belt, Philipp and his HS Technik team-mate Sebastian Saavedra went into the two qualifying sessions amongst the favourites - and the double act lived up to expectations. Two front-row starts on the debut weekend - had Philipp been counting on that? Of course not: "But I knew that we stood a pretty good chance." In Q1, he wasn't quite so lucky. "I came up against some traffic on my fastest lap," lamented Philipp. Otherwise, he might well have taken pole position in his very first Formula 3 qualifying session. So he made up for this in the afternoon by grabbing pole for the Sunday race. "That was good. But the main thing was, whenever we were on the outside, we were the fastest." So why didn't things work out in the race itself? Faulty start technique was to blame. "Unfortunately, I had the same problem both times," admitted Philipp. "Apparently I still hadn't quite mastered coordination of the new procedures at the start." On both occasions, he failed to make a clean getaway. He finished the first race in ninth position and the second, following a furious pursuit from 26th, in fourth. What was the problem on the grid? When it comes to clocking fast lap times or overtaking, Philipp is already equal to the Formula 3 challenge. At the start, though, it became apparent that he was still having some difficulty in adjusting to the switch from Formula BMW to Formula 3. "In Formula BMW, starting is a really straightforward process," explains Philipp. "You don't have to juggle with the clutch pedal and you can come off the clutch completely." In a Formula 3 car, it's all a bit different. "You have to hold the clutch on the bite - it's a completely different type of start," reveals Philipp. If you don't get it just right, the engine stalls. "In fact, I was fairly lucky that no-one drove into the back of me in either race." But there was no thought of giving up. How did the pursuit go? The Sunday race opened with two safety-car laps, which didn't exactly help Philipp's cause: the driver just in front left an excessively generous gap between himself and the rest of the field so that Philipp had a job on his hands to work his way up the field during the laps that followed the restart. "But then I worked my way up from 26th to fourth - that was very satisfying," he says with a smile. He gives full credit to the team for providing him and his team-mate with the two fastest cars on the track this weekend. Despite everything, it was a bravura performance - when the two F3 Euro Series races were held here a few weeks back, there was hardly any overtaking at all. How did Philipp manage this? "It was like a knife cutting through butter. There was no way I was going to let anyone hold me up and I simply drove past anyone who got in my way." A modicum of fire in the belly is more potent than any energy drink on the market. Obviously he feels frustrated not to have converted favourable positions on the grid into podium finishes. "But we were the ones with the speed. We were clearly the fastest on the track." In that respect at least, the season has got off to an auspicious start. About Philipp Eng... Eng has been driving competitively since the tender age of nine. He started off in go-karting and took a string of Austrian titles in various categories - Division IV Cadets 80cc (2000), Division V Bambinis 60cc (2001) and the ICA Junior Class (2002). In 2003, he embarked on a year's training in Italy. In the 2004 European championships, he was fastest in qualifying, and in the Italian Open, he took the overall victory. In 2005, he once again returned to karting in Italy before finally making the switch to Formula BMW. The pinnacle of his career was third place overall in the 2007 season and winner of the Formula BMW World Final in Valencia. And his reward for this achievement was a Formula One test drive with the BMW Sauber F1 Team. www.philipp-eng.com Press Contact: Stephan Heublein Tel: +49 (0)89 500 948 84 Email: redaktion@adrivo.com adrivo Sportpresse GmbH Liebenauer Hauptstrasse 106/6 A-8041 Graz Tel: +43 (0)316 915 252 Fax: +43 (0)316 915 253 Email: info@adrivo.com www.adrivosportpresse.com About adrivo Sportpresse GmbH: adrivo Sportpresse GmbH publishes at www.adrivo.com one of the most popular motorsports online magazines. The website reaches a core fan base in Germany, Austria and Switzerland. It captures all the magic and glamour of motor racing, bringing its visitors compelling reports from all the different championships. The company also runs the official websites of Michael Schumacher and Formula One star Nick Heidfeld as well as working in close cooperation with some of the major figures in international motor racing. Furthermore, adrivo Sportpresse GmbH provides and distributes high quality editorial motorsport content. The flexible and customizable content portfolio is available in up to 10 languages. The clients include relevant on- and offline media like Spiegel, AutoBild, T-Online, Lycos, Yahoo etc. as well as companies that sponsor motorsports like DHL, Bridgestone, Dunlop, Aral and many more. Through adrivo.com and our client’s adrivo media network we reach around 4,5 million motor racing fans each month. Our content has become very influential and an opinion maker in Germany, Austria and Switzerland!

01-17-2019 | Industry, Real Estate & Constr …
HAHN Group
HAHN Group is Continuing to Grow: Philipp Unterhalt Joins Management
Philipp Unterhalt appointed Managing Director of the HAHN Group and Interim CEO of Rethink Robotics GmbH Following the recent years‘ success and ensuring long-term profitable growth, Philipp Unterhalt strengthens the HAHN Group management by the side of Thomas Hähn and Klaus Siegmund. He will be responsible for the division Process Technologies and in particular he will focus on the development of digital services. In addition, he will establish the department of corporate
03-18-2016 | IT, New Media & Software
Perfion
Tjaark Philipp Meyer is new member of the Perfion Product Information Management …
Tjaark Philipp Meyer has joined the growing Perfion team as an International Solution Consultant for Germany, Austria and Switzerland. Back in 2003, Tjaark Phillip Meyer started working with Product Information Management solutions and he has been busy doing this ever since. He has held positions as project manager and consultant for PIM, MAM, and print media. As such, he has had the opportunity to dive deep beneath the hood of four
04-12-2011 | Arts & Culture
Ketterer Kunst
Philipp Otto Runge: Creative and Ingenious - Rare Key Work of Romanticism at Ket …
Munich, 12 April, 2011, (kk) - With Philipp Otto Runge’s ”Die Zeiten“ a main work of German Romanticist print art will be called up at Ketterer Kunst on 14 May. ”The rare first edition of this key work will definitely generate much interest, as a mere 25 copies are in existence world-wide, many are in possession of renowned museums“, thus Robert Ketterer. Even Johann Wolfgang von Goethe, who was rather critical
12-03-2009 | Arts & Culture
Videogeist
Bangkok, Thailand 4D Light & Sound Facade Installation on the Royal Throne by Ph …
Bangkok, Thailand 4D Light & Sound Facade Installation on the Royal Throne by Philipp Geist Place:Ananta Smakhom Throne Hall (Bangkok / Thailand) Date: 5th December - 13rd December 2009 4D Light & Sound Installation by Philipp Geist www.videogeist.de The facade installation on the Royal Throne in Bangkok, Thailand is a central part of the festivities celebrating king Bhumibol's birthday and will be attended by thousands of Thai citizens who honour their king. The art work
09-08-2008 | Sports
adrivo Sportpresse GmbH
Philipp Eng: Already smelt the champagne
Spa-Francorchamps, one of the last real natural circuits, is, with moxie curves such as Eau Rouge and Blanchimont, a genuine driver circuit. It was exactly there that in the first race Philipp could show why he is, and not without reason, the incumbent winner of the Formula BMW World Finals. "I had already smelt the champagne," he said. Taking off from start position six, he had already moved up to
08-04-2008 | Sports
adrivo Sportpresse GmbH
Philipp Eng: Pastures New In Hungary
Philipp is back into his race rhythm. Two weeks ago, Hockenheim was the venue for his return to Formula BMW Europe; in Hungary, he continued his re-acclimatisation on an unfamiliar circuit. Unfortunately, he had to contend with obstacles of a varied nature, ranging from technical problems to other vehicles. What went right and what went wrong? A retirement and a P18 don’t exactly resemble a victory parade, yet Philipp is confident that
Comments about openPR
9 o'clock: discuss press release with client, 10 o'clock: submit release to openPR, within the briefest possible time release is published and displayed in a prominent place on openPR.de. I am thrilled!
Zehra Spindler, Calypso Now! - Communication Agency