Uschi Ackermann's and Pug Sir Henry's Perfume Bottles at Ketterer Kunst - A Sensational EUR 120,000 for a Good Cause 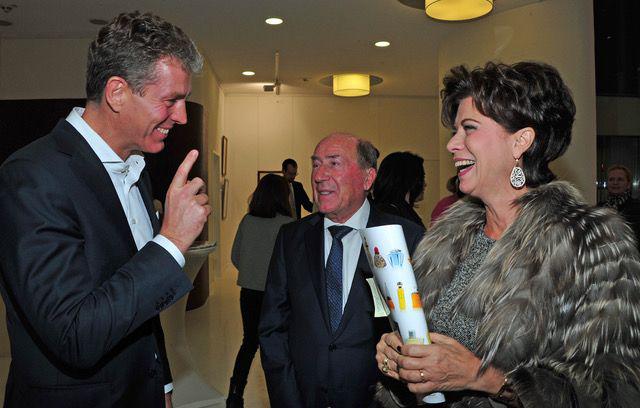 Munich, 20 December 2016 (kk) – The atmosphere was great, the success terrific. Yesterday Robert Ketterer, auctioneer and owner of Ketterer Kunst, sold what presumably is the biggest private collection of large-size factices of perfume classics for a fantastic total of around EUR 120,000. Compiled by Uschi Ackermann, public relations specialist and owner of Sir Henry, Germany's most famous pug, proceeds of the around 300 flacons will go to VITA, an organization that trains assistant dogs. The rush on the charity auction was tremendous. The list of celebrity guests was long and included, apart from the Who's Who of the German media scene, names like Princess Alexandra von Hohenzollern, Chiara Ohoven and Sophie Wepper and her husband David Meister. Anita and Erwin Müller, owners of the drugstore chain of the same name, did not miss out on this event, either. Other guests were Stefan Mulder, vice president of Lornamed Europe, Sibylle Schön of Aigner as well as Yvonne and Dr. Eric Schulte, owners of the cosmetics series QMS.Perfume lovers came from near and far as this was a one-time occasion as many of the noble decoration bottles are no longer available as perfumes. Experts in the perfume business came from Berlin, Hamburg, Ulm and the rest of Germany, as well as from Kitzbühel, Marbella, Nice, Vienna and Zurich – to name just a few places. The large number of bidders in the salesroom did not miss the chance to prove their generosity. On top of flacons by Chopard (lot 100), Salvador Dalí (lot 45), Guerlain (lot 83), Elisabeth Taylor (lot 87) and Vivienne Westwood (lot 97), each sold for EUR 5,000, the perfume classic “Chanel N° 5“ (lot 43) made for the highlight of the evening. While half a dozen written bids had already been placed for the noble bottle beforehand, the price rose quickly and it needed a bid of EUR 8,000 from a perfume lover who had come all the way from California to stop the race. A total of 17 of the 289 scent bottles were sold at prices in four-digit realms. Everyone realized that the event was about both unique cult objects as well as a good cause. Uschi Ackermann has been involved with the VITA assistant dog organization for a couple of years. “Just as it was the case with the perfume bottles, it was love at first sight with the dogs, too“ the widow of Gerd Käfer, delicatessen king and organizer of legendary party events, recalls. “I met the eleven-year old Ben Neumann and his VITA-trained dog Quest at an event organized by VITA and was deeply impressed by both of them from the start. It's the way that the dog makes Ben happy that inspired me to donate the proceeds of my collection to the organization.“Robert Ketterer felt the same when he met Ben, who, by the way, opened the auction with a wonderful speech. Enthusiastic about the idea of this charity auction, the auctioneer hosted the evening with a lot of charm and motivated the audience to ever new bidding heights. “I am utmost happy that we were able to realize this impressive result with such an unusual auction“, says Robert Ketterer. He continues: “The assistant dogs do not only facilitate everyday life for many people, they are also loyal friends and an invaluable support. That's why I am very glad that our donation will assist VITA in the great job they are doing.“Since it was founded in 1954, Ketterer Kunst has been on the forefront of auction houses dealing in Fine Art and Rare Books, with its headquarters in Munich, and a branch in Hamburg. Representatives' offices in Berlin, Heidelberg, Dusseldorf, the Benelux Union, France, Switzerland and the US have contributed substantially to the company's success. In addition, exhibitions, special thematic and charity auctions as well as monthly online auctions at www.ketterer-internet-auction.com are regular events at Ketterer Kunst. Robert Ketterer is owner and CEO of Ketterer Kunst.Press inquiries:Ketterer Kunst Joseph-Wild-Str. 18 81829 München Michaela Derra M.A. Telefon: +49-(0)89-55244-152 Fax: +49-(0)89-55244-177 E-Mail: m.derra@kettererkunst.de www.kettererkunst.de Client inquiries:Ketterer Kunst Joseph-Wild-Str. 18 81829 München Tel. +49-(0)55244-444 Fax.: +49-(0)55244-177 E-mail: infomuenchen@kettererkunst.de

You can edit or delete your press release Uschi Ackermann's and Pug Sir Henry's Perfume Bottles at Ketterer Kunst - A Sensational EUR 120,000 for a Good Cause here

02-10-2014 | IT, New Media & Software
Clueda AG
Robert Feckl has joined Clueda's advisory board
Munich, Feb 6th 2014 Robert Feckl (54), who holds responsibility as CIO of German bank Baader Bank AG, has joined the advisory board of Munich based semantic search and news analytics company Clueda. “With Robert, a solid software expert joins our firm. His longstanding network in the IT industry will, no doubt, help Clueda strategically”, Clueda CEO and founder Volker Stümpflen said. Since 2001 Feckl has run the information technology systems of
08-08-2011 | IT, New Media & Software
Vega Interactive UG
Scrubs Star Robert Maschio trusts Vega Interactive
Brunswick / Los Angeles, August 5th 2011. “Scrubs” Star “Robert Maschio” relies on the digital Know-how of Vega Interactive, a company based in Brunswick, Germany. In a time of cultural change determined by New Media is it becoming increasingly important for people in the public eye to consult with and receive support from professionals. Robert looks back on more than twenty years of acting experience. The New York Native spent many
05-06-2011 | Sports
P1 Groupe
P1 Groupe Retained By Robert Stout
P1 Groupe, the premier motorsports management company has been retained by up and coming racer Robert Stout for representation. Stout has been racing since 2006 and has made a strong mark in the racing world. In his first two years, he was nationally ranked in the top 20 out of 250 racers in his class, competed in 82 races netting 49 Top-10’s, 29 Top-5’s, 18 podiums, 5 wins and 5
12-10-2010 | Leisure, Entertainment, Miscel …
Robert Amsterdam
Robert Amsterdam Best Attorney
Lately Amsterdam & Peroff promoted which they have been employed because lawful experts in order to prior PM associated with Thailand Thaksin Shinawatra, to assist in our good problem for that rebirth associated with democracy as well as unsafe effects of regulation within the Southeast Hard anodized cookware nation. "We tend to be thrilled to become maintained through PM Shinawatra to work about this immediate issue, and that we take
08-10-2009 | Industry, Real Estate & Constr …
VAG-Armaturen GmbH
Robert Fellner-Feldegg awarded Professorship
The Managing Director of the VAG Group, Mr Fellner-Feldegg, Industrial Engineer, has recently been honoured with a Professorship. Mr Fellner-Feldegg was awarded the title of visiting professor for a 3-year period on 30 June by the Tongji University in Shanghai. In receiving the title, Mr Fellner-Feldegg joins a host of world-renowned experts in the University's gallery of visiting professors – among them, Dr Klaus Töpfer, former German Minister for the
05-15-2008 | Leisure, Entertainment, Miscel …
WCPE
WCPE “Preview” Features Carolina Ballet’s Robert Weiss
WCPE “Preview!” Features Carolina Ballet’s Robert Weiss Interview with Artistic Director Airs May 11 WAKE FOREST, N.C. (May 9, 2008)—TheClassicalStation.org announces today that its weekly program “Preview!” will feature an interview with Robert Weiss, artistic director of the Carolina Ballet. The interview can be heard during the station’s Sunday, May 11 program that runs from 6-9 p.m. ET. Weiss will discuss the Ballet’s new production of “Sleeping Beauty” with WCPE’s
Comments about openPR
Your portal is fast, simple, and easy to use. Others may have more functions but they also demand more editing time, you have to preformat the text in order to achieve a good result etc. I think openPR is really fantastic!
Andreas Knepper, wallmedien AG