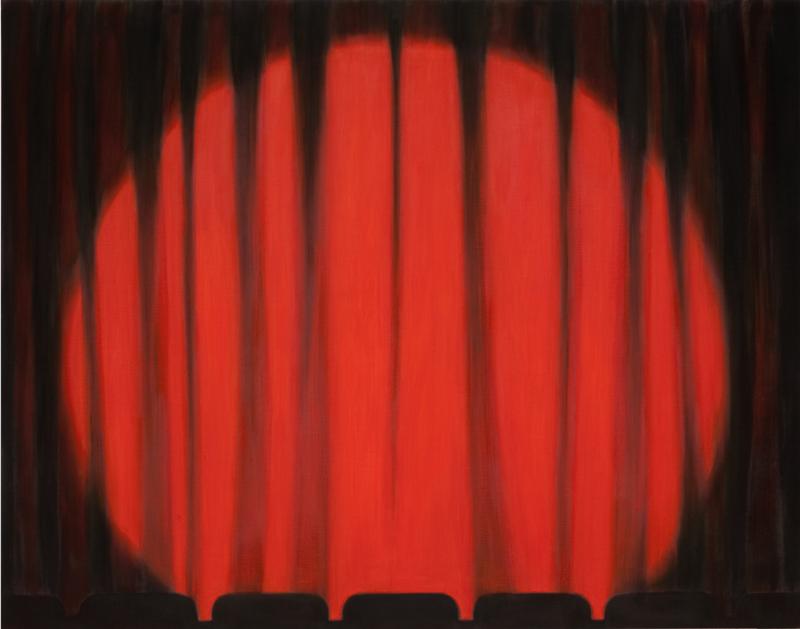 19th February – 2nd April 2022 Opening reception with Robert Zandvliet on 19th February 2022, 5-9 PMRobert Zandvliet’s paintings may be understood as visual color philosophy. After "Seven Stones" (2013) and "Stage of Being" (2018), Bernhard Knaus Fine Art presents the third solo exhibition of the Dutch artist in the Frankfurt gallery space in spring 2022. The core of the exhibition is formed by the four large-scale paintings "Abendrot", "Vos", "IJs" and "Git". Each of these works embodies a color to which Zandvliet assigns a suitable form, an image in which the color manifests most optimally. This selection is based on the artist's subjective perception, but its starting point is always the color itself. Against this background, questions arise about the interplay of form and color, which are discussed again and again in the contexts of natural sciences and cultural studies. The titles of the four central new works highlight the interplay of associative and intuitive color perception that is alluded to in them. The term "Vos", for example, carries within it the Dutch name for the animal fox, whose sorrel coloration can be found in the corresponding painting. On the other hand, it is the word used in Dutch to name the kind of chestnut colored horse whose forehead with blaze can also be seen in this work. The etymological dimension of the "Le Corps de la Couleur" series as well as the motifs, color compositions and genres of its paintings reflect Robert Zandvliet‘s interest in forms of variation; perhaps they even show a little play. For in his works, the pictorial subjects are reversible figures situated in the space between abstraction and figuration. This detachment from representational traditions as a means of gaining knowledge through painting itself has its starting point in Zandvliet's artistic practice. The artist’s use of varying painting techniques enables the exploration of different approaches to a color’s physical shape. While the natural deepness of the work "Git" stems from the use of a paint roller and acrylic paint on an unprepared linen canvas, "IJs" displays bits of the underlying canvas and pastose reliefs created with a spatula as points of light that, combined with layers of spray, oil and acrylic paint, let the observer dive deep into a sea of floating ice. With his "Le Corps de la Couleur" paintings Robert Zandvliet lets the audience participate in his search for the ultimate form of color with regard to phenomena of human perception. In close reference to previous works and series from his oeuvre, the artist thus illuminates color by means of its most elementary components: optical stimuli, physiological valences, and psychological sensation. The paintings from the workgroup "Le Jardin", which are publicly shown for the first time in this exhibition, also revolve around elemental themes. In this series, Zandvliet develops the idea of the paradisiacal garden and the representation of nature. Without a horizon or the like, the focus in these works is nature’s richness of detail and structure instead of the image of a landscape. The expressive brushstroke lets pictorial elements and image planes merge into one another in colors ranging from soft jade green over lively sea green to mysterious evergreen. At its end, Robert Zandvliet offers a new outlook on contemporary painting: a kind of painting that eludes attributions and -isms, which at the same time opens itself to questions about its constitution, perception and interpretation.Robert Zandvliet (*1970) lives and works in Haarlem, Netherlands. He is represented by Bernhard Knaus Fine Art (Frankfurt), Peter Blum Gallery (New York), Galerie Knoell (Basel) and Galerie Onrust (Amsterdam). Zandvliet has been awarded international art prizes and his works are part of the collection of the Stedelijk Museum, among others.Press contact: Michelle Heyer BERNHARD KNAUS FINE ART GmbH Niddastrasse 84 D-60329 Frankfurt / Main Tel.: +49 [0]69 244 507 68 heyer@bernhardknaus.de www.bernhardknaus.comFrankfurt gallery representing 19 international artists and curating 6 exhibitions per year. EXHIBITIONS 2022/23:Mark Francis 12th November 2021 – 12th February 2022 Robert Zandvliet 19th February – 2nd April 2022 Ralf Peters / Marten Schech May – June 2022Giacomo Santiago Rogado July – August 2022Bernhard Prinz September – October 2022Cigdem Aky November 2022 – January 2023

04-19-2022 | Arts & Culture
Bernhard Knaus Fine Art
THINGS BEHIND THINGS
Marten Schech / Ralf Peters 21st April - 11th June 2022 Opening reception 21st April, 7 PM We find ourselves in a room surrounded by a collection of digital and analog things, surrounded by living and dead matter. How we got here, we know, but how do we move forward? The exhibition THINGS BEHIND THINGS presents new sculptural works by Marten Schech in an interplay and in juxtaposition with recent photographs by Ralf
Comments about openPR
9 o'clock: discuss press release with client, 10 o'clock: submit release to openPR, within the briefest possible time release is published and displayed in a prominent place on openPR.de. I am thrilled!
Zehra Spindler, Calypso Now! - Communication Agency