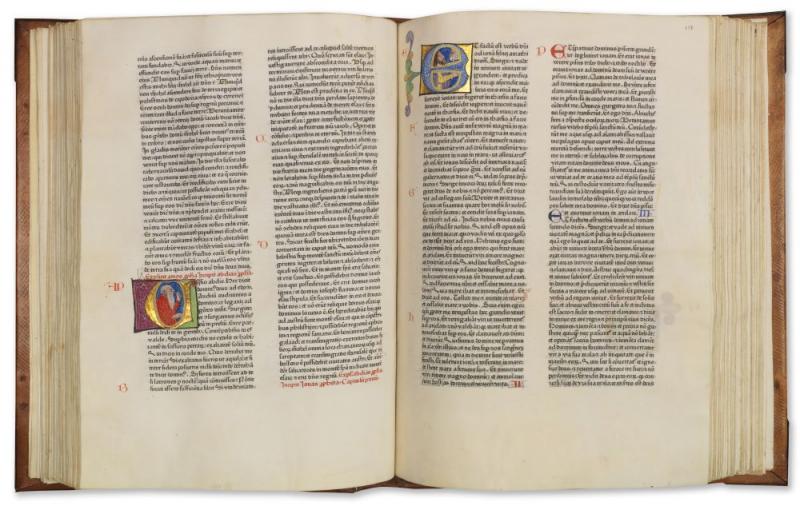 Hamburg, November 25, 2019, (kk) – With total proceeds of more than € 2.2 million*, the auction of Rare Books at Ketterer Kunst in Hamburg on November 25 did not only yield an excellent result, it also set a new season record for the second consecutive time. The auction‘s undisputed star was the Fust-Schöffer-Bible from Gutenberg‘s printing press, which now is the most expensive bible in German auction history.The TOP 5Nr. 011: Fust-Schöffer-Bibel, Mainz 1462. Result € 1,050,000*, calling price: € 800,000No. 026: Claudius Ptolemaeus – Geographie opus novissima traductione, 1513. Result € 100,000*, calling price: € 80,000No. 061: Max Beckmann – Brentano, Fanferlieschen Schönefüßchen. Result € 62,500*, calling price: € 7,000 No. 083: Marc Chagall – Bible, Paris Tériade 1956. Result € 60,000*, calling price: € 28.000 No. 056: Rainer Maria Rilke – Typoskript. Result € 30,000*, calling price: € 8,000Robert Ketterer, owner of Ketterer Kunst, expresses his enthusiasm: “With the two seven-figure results realized for works by Wassily Kandinsky and Andy Warhol in spring, we now set a new mark in the millions in the Rare Books section. This once more underlines our position as Germany‘s number one auction house.“ Christoph Calaminus, auctioneer and head of the Rare Books department of Ketterer Kunst in Hamburg adds: “This has been an excellen auction. The sale of the Fust-Schöffer-Bible was a rare and special event, which is why I am ever the more happy that we accomplished our mission to realize the highest auction result for a bible in Germany ever.“The moment the Fust-Schöffer-Bible (lot 11), of which only three copies can be found in private ownership world-wide, went to auction was awaited eagerly around the globe. The atmosphere was tense in the saleroom when the masterpiece from the first decade of book printing was called up. A private collector from Switzerland won the precious rarity for a result of € 1,050,000*Bibles occurred on several occasions in this auction, and next to a Biblia Germanica, the so-called “Merian-Bibel“ (lot 131) from 1630, which soared from a calling price of € 2,500 to a result of € 13,125*, Marc Chagall‘s celebrated series of etchings with scenes from the bible was particularly convincing. The work of a one-of-a-kind artistic relevance – its printing plates were destroyed after completion – was lifted from a calling price of € 28,000 to a result of € 60,000* by an American trader who relegated art lovers from all over Germany to places second and beyond. Second place in the auction ranking was won by the “Geographie opus novissima traductione“ by Claudius Ptolemaeus (lot 26). The work with the first map of America, and increased with later maps from Martin Waldseemüller in one atlas, will now go on a journey to the New World for a result of € 100,000*.Max Beckmann‘s “Brentano, Fanferlieschen Schönefüßchen“ (lot 67) experienced one of the auction‘s sharpest increases, as it was lifted from a calling price of € 7,000 to the result of € 62,500* by a particularly persistent art lover from Southern Germany. His commission beat almost half a dozen phones from Germany and England. It took a final price of € 30,000* for a collector from the French-speaking part of Switzerland to win Rainer Maria Rilke‘s “Typoskript, Korrekturfahnen, 6 Briefe und 1 eigenh. Gedicht“ (lot 56) over the phone. He did not only outperform competitors from Germany and Austria, but also made for a result a four-fold the calling price of € 8,000.The sharpest increase of all – that is a twelve-fold of the calling price of € 2,000 – was realized for Friedrich Gerhard Müller‘s nine volume strong “Sammlung russischer Geschichte“ (lot 190), which was popular with book lovers from all over Europe. The very rare complete series of this collection was honored with a result of € 25.000* by a phone bidder from the American West Coast. Neither competitors from all over Europe on the phones nor a persistent bidder in the sale room could curb his eagerness.More great results were realized by, among others, the following:Lot no. 075, Franz Kafka, Der Prozess. Calling price € 2,000, result € 13,750* Lot no. 276, Brücke-Katalog zur ersten Ausstellung der Künstlergruppe. Calling price € 11,000, result € 26,250** The result is the hammer price + 25 percent plus VAT Unsold lots can be acquired in the post auction sale until December 21, 2019.Contact Media: Ketterer Kunst Joseph-Wild-Str. 18 81829 München Michaela Derra M.A. Tel.: +49-(0)89-55244-152 Fax +49-(0)89-55244-177 E-Mail: m.derra@kettererkunst.de Contact in the Departmet of Rare Books:Ketterer Kunst GmbH Holstenwall 5 20355 Hamburg, Germany Christoph Calaminus Tel.: +49-(0)40-374961-11, Fax-66 E-Mail: c.calaminus@kettererkunst.de www.ketterer-rarebooks.deThe family company Ketterer Kunst (www.kettererkunst.com and www.ketterer-internet-auctions.com), with headquarters in Munich and branches in Hamburg, Duesseldorf, Berlin and the USA, was founded in 1954. It is one of the leading European houses for auctions of Fine Art from the 19th to the 21st Century and Rare Books. The latest art market review for Fine Art 2018, compiled by artprice.com, ranks Ketterer Kunst on place 11 in the global TOP 100. The auctioneer's clientele predominantly consists of international collectors, art dealers, curators and museums.

You can edit or delete your press release Mission Accomplished: Rare Books Auction in Germany – € 1,050,000 FOR A BIBLE here

07-21-2020 | Arts & Culture
Ketterer Kunst
500th Anniversary Auction: Million Euro Proceeds Despite Corona – Top-Season-R …
Munich, July 20, 2019 (KK) – With total proceeds of around € 29.8 million* Ketterer Kunst scored the best result of the auction season on the German market. Remaining at level with its 2019 record figures, the house confirms its role as market leader, as the total of 55 results in the 500th auction on July 17/18 beyond the € 100,000 line also delivers impressive proof of. This figure is
09-26-2019 | Arts & Culture
Ketterer Kunst
13 Resident Artists of KÖNIG GALERIE Visiting KETTERER KUNST in Munich – Szen …
Munich, September 25, 2019 (kk) – The KÖNIG GALERIE is hosted by KETTERER KUNST. Berlin and Munich, Prussia and Bavaria, gallery and auction house – is that going to work out at all? "Works out just fine", Robert Ketterer and Johann König agree unanimously. "We both act in the name of art and for the good of our collectors", they continue to explain.
07-05-2019 | Arts & Culture
Ketterer Kunst
Everything a Child‘s Heart Desires: Online-Only Auction on August 15 – BIG A …
Munich, 2 July 2019, (kk) – At first sight the wicked “Capitano“ by HAP Grieshaber and Dodo‘s elfish “Figurine“ do not have much in common, however, both are bound to take a child‘s heart by storm. So it might be a good idea for parents to have a look at www.ketterer-internet-auctions.com from July 15 on. Up until August 15 at 3 pm the Ketterer Kunst ONLINE-ONLY special theme auction offers
06-21-2019 | Arts & Culture
Ketterer Kunst
Anniversary Year Opens With Excellent Auctions – BEST SEASON PERFORMANCE
Munich, June 18, 2019, (kk) – Around € 30 million*, not including direct sales, that's the spectacular result of Ketterer Kunst for the first auction term in 2019. The leading German Auction House did not only beat its previous top figures, it also grossed the highest proceeds in all of Germany by far. A total of 56 results between € 100,000* and € 1,000,000*, of which two above the million