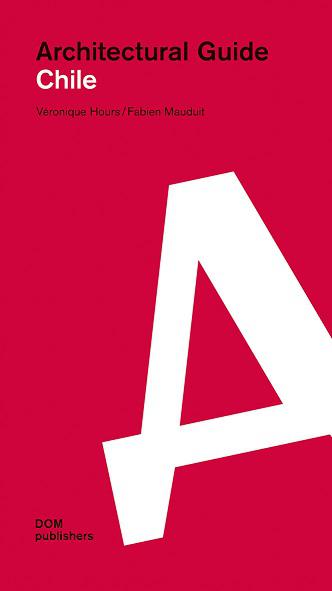 The fact that Chilean architecture has made a comeback on the global stage with modern masterpieces and interesting concepts – particularly over the past fifteen years – can be put down to architects such as the Pritzker laureate Alejandro Aravena, who curated the Venice Architectural Biennale in 2016. However, this is also due to less well-known architects, such as Mathias Klotz, Smiljan Radic and Pezo von Ellrichsausen.The Architectural Guide Chile presents 164 buildings from across Chile dating back to the twentieth and twenty-first centuries and primarily addresses the development of modernity linked to Chilean architectural traditions. Edifices are mainly always made of wood in this country which lies between the Andes and the Pacific Ocean and is repeatedly afflicted by earthquakes. Europe was an important source of inspiration in the twentieth century – particularly the Bauhaus movement and Le Corbusier – although Chilean architects did not forfeit their close ties to their country and its culture. The development of cities and their architecture – which spawned a number of notable public buildings, important infrastructure and a government housing programme – ground to a halt for almost twenty years under Pinochet’s military dictatorship. However, the return to democracy saw Chile gradually find its way back to a unique architectural language. This was facilitated by appropriate construction programmes, the vocational training of architects and competitions. The large number of projects presented by the Chilean and international team of authors reflect this. Community-based social housing projects, such as those by the firm Elemental, underline the dynamism of contemporary Chilean architecture and are arguably food for thought in the context of the current construction of apartments across Europe.In keeping with the different climate zones and the associated demands on architecture, this guide is subdivided into four regions: Norte, Central, Metropolitana and Sur. Since around 40 per cent of the population live in Santiago and the surrounding area, about half of the built structures presented herein are situated there. The volume is enriched by ample background knowledge provided by complementary introductions and essays on Chilean architectural traditions as well as technical and climatic features, among other things. Included is a contribution by Alejandro Aravena on the concept behind Elemental. Latin American architecture is already represented by DOM publishers with architectural guides on Havana and Brazil.gisela graf communications supports publishers, museums and institutions specialising in architecture, design or art, with professional press and PR work, also on an international level. Communications — Individual concepts and texts for media relations Connections — Media contacts, interview arrangements, events — anything that brings people and subjects together Corrections — Editing and copy editing of texts and specialised publications, catalogues and brochuresgisela graf communications Gisela Graf Schillerstr. 20 D 79102 Freiburg T +49 761 791 99 09 F +49 761 791 99 08 contact@gisela-graf.com www.gisela-graf.com