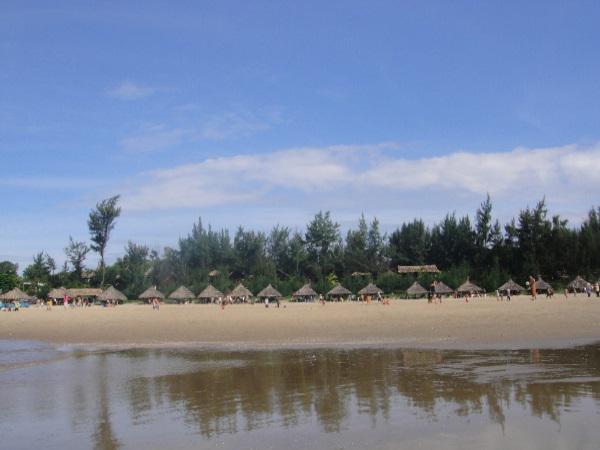 Vung Tau authority has officially banned carousing and cooking on the beach on April 26. 2016. To arrive at this decision, the cause also comes from the unconscious of many people.According to Ms. Truong Thi Huong, Deputy Chairwoman of People's Committee of Vung Tau City, people trade food and tourists carouse at the beach then they don’t clean up, even they throw rubbish indiscriminately and sleazily which contribute to the loss of aesthetic beach and coast polluting, and also reduce coastal water beach quality.In addition, after swimming, garbage from living and giving feasts are discharged beside of sleeping place unconsciously. This issue has puzzled the authority and this time the city leaders have to correct severely and it’s necessary to seek remedies for this problem. This unconscious is making the amount of garbage directly proportional to the number of residents and visitors to the beach doing that actions mentioned above, as bad Vung Tau tourism image. Besides, the carousing at the beach also causes disorder when tourists begin to be drunk which led to fights. There has been a situation that after being drunk the tourists swim at the beach, then he died. That is to say that carousing also is a big hazard for tourists as well as residents.Currently Vung Tau beach is much cleaner and more beautiful. There are no longer carousing, cooking and seafood trading situation. This really is a spectacular makeover of the city of Vung Tau. Now if you travel to this coastal city you will be so surprised because of what you see. Landscape has changed a lot. Vung Tau looks as if has put on an entirely “new shirt”. And tourists are still allowed to bring cooked food and non-alcoholic drinks to the beach. Those who do not clear their trash will be fined. Or they can now have their meals at restaurants or bistros near the beach. Cooperative members who want to continue their businesses can move to the busy Vung Tau tourism market instead. However, this positive change also has faced controversies. Previously the seafood yokes on the beach carrying chose to buy by tourists because of their convenience and relatively reasonable prices. Now if ones want to use fresh seafood they are forced to buy back from the nearby restaurants with high price or go further to the markets. Eating on the beach is a hobby for everyone when come to Vung Tau. So the authority should take measures to support the tourist the nearest places to buy seafood at the right price. As well as arranging more of the trash on the beach to serve the needs of travelers.It doesn’t know that whether how long Vung Tau City authority will maintain these measures. It should be said here that is human consciousness. The consciousness of people is difficult to turn, but it can be hardly adjusted by the law and the community rules. Most local authorities have understood this, but there is little place which could “protect" the sea (in particular) and preserve tourism image (in general) in its entirety.22.05.2016: Silvia Huynh - ITI-HOLIDAY http://www.vietnam-visa-for-vietnam.com/vung_tau_beach_vietnam.htmlITI-HOLIDAY Germany is an online travel agency for tours in Vietnam, Laos and Cambodia. We are offering affordable individual tours and fair travel service for the Europeans and here especially for the German market, into the Asian regions. ITI-HOLIDAY is an specialised international tour operator with a comprehensive service for travelers in Southeast Asia and Indochina. We are present on the European travel market Since 2008. We pleased about our growing customer numbers and popularity. We set great attention to customer satisfaction, service, fair prices and to realize it, we are leveraging the long experience of ITI-HOLIDAY Asia. Our strong community of local tour operators makes it possible.ITI-HOLIDAY Deutschland Indochina Travel Individual Klingerstrasse 41F 09117 Chemnitz Germany Proprietor Heiko Grimm Tel.: +49 371 2832201 Tel.: +49 371 3179571 Fax: +49 3212 1415272 E-Mail: info(at)iti-holiday.info Internet: www.vietnam-visa-for-vietnam.com

03-15-2017 | Tourism, Cars, Traffic
ITI-HOLIDAY
Vietnam Visa on Arrival now available at the airport Cam Ranh
The Visa on Arrival for Vietnam has been to enable travels to Vietnam for several weeks again with arrivals at the international airport of Cam Ranh in the center of the country. This is especially for those travelers who want to experience a relaxing beach holiday in Vietnam because the seaside resort of Nha Trang with its seven kilometers long beach and a lot of tropical islands along of the
09-12-2016 | Politics, Law & Society
ITI-HOLIDAY
Environmental disaster in Vietnam
In Vietnam occurred the biggest environmental disaster since the deployment of Agent Orange by the Americans during the Vietnam War. It happened almost unnoticed by the world while Europe was busy with the refugee crisis and America with the forthcoming presidential elections of the USA. The perpetrators of the environmental disaster come from abroad and are supported by the Vietnamese politicians, similar as it was happen at the Vietnam War. "
09-08-2016 | Tourism, Cars, Traffic
ITI-HOLIDAY
Tourists killed in Vietnam
Vietnam belongs for tourists to the most popular and safest travel destinations in the world, as long as one can believe officially widespread reports. However, this information may not been longer current since a long time. More and more tourists in Vietnam were killed at criminal offenses as well by tragic accidents. These accidents occur mostly due to insufficient checking for compliance with statutory safety regulations by the Vietnamese authorities.
07-04-2016 | Tourism, Cars, Traffic
ITI-HOLIDAY
Visa exemption for Vietnam is extended
The mystery of the extension of the Visa waiver for Vietnam is dissolved. Today (at the first of July.2016) we received official reports from Vietnam where announced that the wishes of the Vietnamese Ministry of Tourism are realized and the Visa exemption for citizens of five European countries is extended for one more year, until the 30.06.2017 becomes. But for some Vietnam vacationers this news comes too late, as they

10-15-2020 | Energy & Environment
Transparency Market Research
Market Size of Polypropylene Market Forecast Report 2019-2027
Global Polypropylene Market: Highlights The global polypropylene market is projected to grow at a CAGR of more than 5.5% between 2019 and 2027. The substantial growth from packaging and construction industry is anticipated to drive global polypropylene market during the forecast period. Polypropylene possesses beneficial properties such as high surface hardness, good tensile strength, and strong chemical resistance. Hence, it is one of the most versatile polymers used in packaging, automobile, construction,
01-23-2020 | Logistics & Transport
Ken Research
Vietnam Logistics and Warehousing Market is Expected to Grow at a CAGR of 13.3% …
• The E-commerce logistics market in Vietnam was observed to be highly concentrated with the presence of major players such as GHN, VNPost and Viettel Post • Competition within the logistics industry is ramping up due to tightened capacity along with increased consolidation within the supply chain arena, which has resulted in fewer partners for 3PLs and increased prices. Vietnam is focusing on attracting investment in logistics infrastructure development, constructing regional and international logistics
12-18-2019 | Business, Economy, Finances, B …
CapitaLand
ASCOTT OPENS RECORD 7,500 UNITS AND SIGNS OVER 14,100 UNITS IN 2019 TO BOOST FEE …
Secures 25 new franchise and management contracts offering over 3,400 units across Asia Pacific and Africa Singapore, 18 December 2019 – CapitaLand’s wholly owned lodging business unit, The Ascott Limited (Ascott), has stepped up its global expansion in 2019 with a record opening of about 7,500 units in over 40 properties across 30 cities and 13 countries. Ascott has also signed 25 new franchise and management contracts with more than
09-08-2011 | Industry, Real Estate & Constr …
Fusion Resorts
Fusion Resorts to sign new 5-star Fusion Maia resort in Ham Tan
On the 1st of September 2011, Fusion Resorts (fusion-resorts.com) has signed its newest Fusion Maia property on a 50-hectare piece of beachfront land in Ham Tan (Binh Thuan province) with KTG Land. Not only do Fusion Resorts take the management of the resort on itself, but the Design and Development Company behind Fusion, Serenity Holding will also take a stake of 30% in the resort to guarantee its quality and
12-18-2010 | Business, Economy, Finances, B …
Ocean Villas Group Pte. Ltd.
Vietnam to see thirty more Accor hotels by 2013
Accor, the world's leading hotel manager and market leader in Europe, have set an ambitious goal of operating thirty additional hotels in Vietnam by 2013. Accor already operates hotels in ninety countries and employs more than one hundred and forty five thousand people. Should Accor achieve their goal in Vietnam, they will have almost three times as many hotels under their management in the country. Patrick Bassett, Accor’s Vice President of operations for
10-15-2007 | IT, New Media & Software
ABAS Software AG
First prospective customer forum in Vietnam
Karlsruhe, October 15, 2007 – The first weeks of the new abas partner KMR Ltd. in Vietnam look promising in terms of success. At the first prospective customer forum at the end of August in the metropolis of Ho Chi Minh City, previously known as Saigon and having a population of 6 million, there were 50 prospective customers and around 30 journalists from the press and television. Also organizing the
Comments about openPR
OpenPR is clearly structured and remains true to its principle of confining itself to the essential parts. OpenPR has proven to be a very good and reliable partner to our media agency: Within the shortest time the releases are online and go down well with the media representatives. The success of OpenPR is reflected in the steadily increasing number of press releases. It is good that OpenPR exists!
Ursula Koslik, Director Marketing & PR, F+W Hamburg