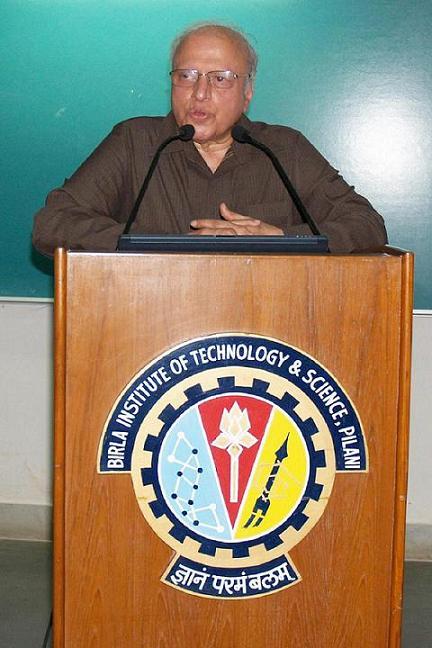 For this champion of India's Green Revolution, cause of work is the inspiration, he believed that he had to serve the nation and derives his satisfaction on the achievement of India changing from a nation of Begging Bowl to Bread Basket. He still has many unfulfilled dreams. Prof KE Raman Deputy Director Administration Birla Institute of Technology and Science (BITS) Pilani welcomed the gathering and read out the message of Chancellor Dr KK Birla describing the first Director of the Institute Prof V Lakshminarayanan (VLN) as the Champion with a mission who took the vision of the doyen of Indian Industry Late Shri G D Birla in establishing an Institution of world class standards at Pilani and the occasion of Prof MS Swaminathan coming to Pilani on Sep 18, 2007 for delivering the VLN Memorial lecture as indeed a honor for the Institute. Proud Alumnus of BITS Pilani Padma Shri Prof D Balasubramanian Director of Research at the prestigious LV Prasad Eye Institute at Hyderabad who has played a stellar role in Popularization of Science described Prof Monkombu Sambasivan Swaminathan as one who reread the poem of Mahakavi Bharathiyar as to change the world even if one single person goes hungry instead of destroy the world even if one single person goes hungry. (In Tamil: Thani oruvanukku unavilaiyenil jagathinai azhithuduvom to jagathinai matriduvom). In his speech the 82 year old living legend Prof Swaminathan praised the unique system of education at BITS Pilani and paid rich tributes to Prof VLN with the Swami Vivekananda quote: “This life is short, the vanities of the world are transient, but they alone live who live for others, the rest are more dead than alive.” Starting with the genesis of the green revolution, he highlighted the critical role played by tribal and rural families particularly women, in the selection of plants and animals for domestication and pointed out the recognition of IPR of communities that have not only conserved biodiversity but also value addition by the World Intellectual Property Rights Organization (WIPO). Considering that women constitute 34% of principal agricultural workers and of subsidiary workers and the fact that they are often deprived of land ownership, credit and market linkages, he emphasized on adopting a women-centric approach in well-funded schemes like the National Horticulture Mission, Bharat Nirman, National Rural Health Mission, National Rural Employment Generation programme etc. To deal with all the links of the food chain including the 4Cs played by women Conservation, Cultivation, Consumption and Commercialization Dr Swaminathan has all along advocated a National Action and Policy Research Network on Women and Food Security. He said that Biohappiness results from the conservation, sustainable and equitable use of bioresources. Similar to Silicon Valley for IT, he talked about the Biovalley for BT (Biotechnology), SAZ Special Agricultural Zones on the lines of SEZ Special Economic Zones. For Rajasthan he advocated a Arid Zone SAZ in the Indira Gandhi canal area. Considering that Malnutrition in India is a silent emergency calling for the need to divert the national focus from food security at the national level to nutrition security at the individual level, he highlighted the Nutritional Malady and the Horticultural Remedy. When he spoke about the virtues of Moringa oleifera (Drumstick), it was an eye opener to the jam packed audience in the Lecture Theatre Complex of the Institute. He also touched upon Integrated Gene Management, Community Food Security System, Revival of Botanical and Zoological Gardens, the Svalbard International Seed Vault near the North Pole as well as Access to Genetic Resources and Biotechnologies for Food and Agriculture. Highlighting the findings of the Inter Governmental panel on Climate change, he called for the need for a Genetic shield against sea level rise, gene deployment for salinity tolerance and genetic shield against adverse changes in precipitation. He also spoke about the Power of Innovative Genetic combinations towards super Wheat, Genetic Enhancement of Nutritive Quality and Strategies to increase Nutritional values of Rice, Launching of Genome clubs for Genetic literacy as well as the need for Knowledge Connectivity. For him Green Revolution is not merely expansion but improving productivity and Evergreen Revolution is improvement of productivity in perpetuity without associated ecological harm and green technologies involve integrated pest management, conservation farming in short sustainable agriculture. For this Gandhian production by masses is more important than just mass production and he concluded his lecture by saying that Antoyodaya and Trusteeship are the pathways to Sustainable Development. Vice Chancellor of BITS Pilani Prof LK Maheshwari as well as the family members of Prof VLN presented mementos to Prof Swaminathan. The lecture ended with vote of thanks presented by the President of BITS Students’ Union Mr Hari Krishna Reddy. Only those who wake up and chase their dreams make impact on the society and for Prof Swaminathan there are still many unfulfilled dreams and that itself is a clarion call for the youth of today for the nation building task. Dr BR Natarajan Professor & Dean Birla Institute of Technology and Science Pilani (Rajasthan) 333031 India Phone 91-1596-242210 Fax 91-1596-244183 brnt@bits-pilani.ac.in www.bits-pilani.ac.in Birla Institute of Technology and Science (BITS), Pilani Rajasthan which has set a bench mark in industry university collaboration is one among the top ranking universities in India today offering degrees in various branches of Engineering, Management, Economics, Pharmacy, Sciences, Engineering Technology, Information Systems, Finance, etc presently at Pilani, Dubai, Goa campuses and in the near future at Hyderabad campus apart from an array of work integrated learning programmes for HRD of a vast spectrum of Indian corporates.

04-14-2020 | Arts & Culture
Al-Khalifa Business School
Prof. Igor Eleferenko appointed Dean of Al-Khalifa Business School
H.E. Prof. Sir Igor Eleferenko Ph.D. (Russian Federation) has been elected on 6th April 2020 as the Dean of Al-Khalifa Business School. Born on 23rd May 1958, in Moscow; in 1980 he graduated from Moscow State Pedagogical Institute named after M. Teresa. He has more than 40 years of experience as Associate Editor, Editor, Deputy Head of the APN Bureau in Havana, Deputy Editor-in-Chief, Editor-in-Chief of AVID APN, Editor-in-chief of TRK "TV-News"
05-28-2019 | IT, New Media & Software
Prof Research Reports
Detailed research on Global and Chinese Temperature Meters Market just published …
Worldwide Temperature Meters Market report of 2019 provides a detailed market overview as well as industry analysis for/of companies, manufacturers and distributors covering data on gross margin, cost structure, consumption value, sale price and more. Temperature Meters Market Insights 2019, Global and Chinese Scenario is a professional and in-depth study on the current state of the global Temperature Meters industry with a focus on the Chinese market. The report provides key
04-20-2019 | Science & Education
Banasthali
Banasthali Celebrates 87th Birthday of Dada Prof Diwakar Shastri
By nurturing Banasthali which is today one among the most sought after and top ranking women’s universities in India with global ranking, Prof Diwakar Shastri known to one and all as “Dada” built capacities for the spirit of inquiry, creativity and moral leadership among the enrolled girl students and became their role models. Known for his dignified unassuming personality, gleaming intellect, meticulous planning, deep regard for punctuality, far reaching vision and
11-13-2018 | Health & Medicine
ISA Pharmaceuticals
ISA Pharmaceuticals´ Chief Scientific Officer Prof. Cornelis Melief Receives ES …
Leiden, The Netherlands, November 13, 2018 – ISA Pharmaceuticals B.V., a clinical-stage immuno-oncology company, today announced that its Chief Scientific Officer Prof. Cornelis Melief has been selected by the European Society for Medical Oncology (ESMO) to receive the 2018 ESMO Immuno-Oncology Award in recognition of his life’s work in studying the interactions of the immune system with cancer. He will receive the award during an official ceremony at the opening
09-27-2017 | Energy & Environment
Banasthali
MNIT Jaipur Prof SP Chaurasia Talk on Separation Technologies for Water Purifica …
Globally, there are over 663 million people living without a safe water supply close to home, spending countless hours queuing or trekking to distant sources, and coping with the health impacts of using contaminated water. 1.8 billion People use a source of drinking water contaminated with faeces, putting them at risk of contracting cholera, dysentery, typhoid and polio. The Sustainable Development Goals, launched in 2015, include a target to ensure
09-18-2017 | Science & Education
Banasthali
Prof Joy Mukhopadhyay Talks on Colour Science & Technology at Banasthali
One field which combines Chemistry, Physics, Physiology and Psychology is undoubtedly Colour Science and Technology. Global market size of dyes and pigments is of the order of USD 27.8 Billion with India market size of USD 4.9 Billion. Specialty chemicals, which comprise low volume, high value chemicals with specific applications, constitute a significant part of the Indian chemical industry include agrochemicals, flavors and fragrances, surfactants, polymer additives, personal care ingredients,
Comments about openPR
9 o'clock: discuss press release with client, 10 o'clock: submit release to openPR, within the briefest possible time release is published and displayed in a prominent place on openPR.de. I am thrilled!
Zehra Spindler, Calypso Now! - Communication Agency