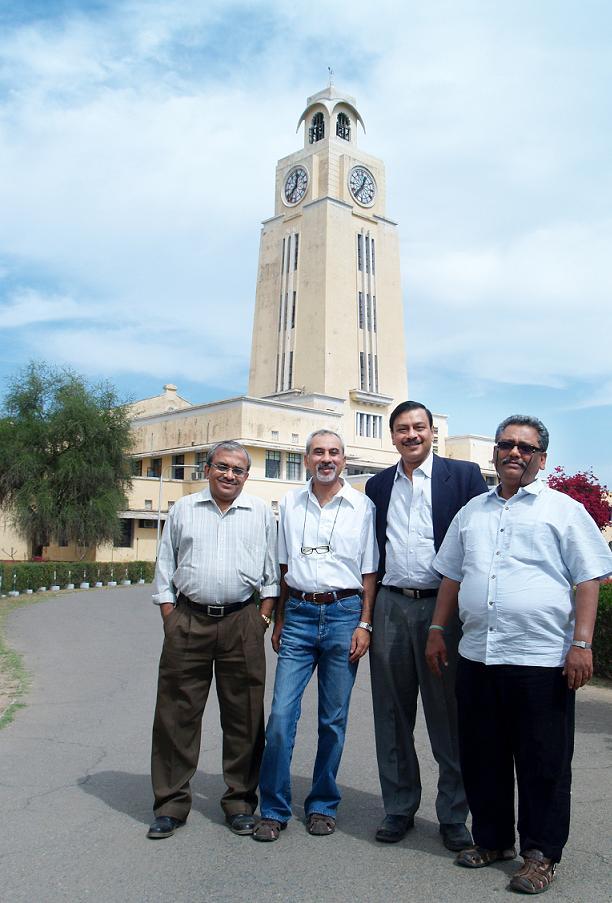 Alumni of BITS Pilani firmly believe that when a mission is taken up with passion, there are no dreams too large, no innovation unimaginable and no frontiers beyond reach. BITSians have always been known for their passion in whatever they do and the noble gesture by the BITS Alumni of 1975-80 batch goes to reiterate the same. This batch had their silver jubilee at Pilani in October 2005 and set a new record for the number of alumni who turned up for the same. This batch like the other batches have indeed enhanced the reputation and raised the profile of BITS Pilani both nationally and internationally through their successes, contributions and support which has ensured that BITS Pilani will continue to remain as one of the top ranking universities not only in India today but also India tomorrow. The alumni of this batch include a stellar constellation of Chairmen, Managing Directors, COOs, CEOs, CIOs, Scientists, Presidents and Vice Presidents, Techies, Entrepreneurs, Media Moghuls, Realtors as well as Consultants. Each one of them undoubtedly has been a leader in applying technology to improve lives across society. Irrespective of whatever degree they did at Pilani, wherever they came from and whatever their life journey had taken them to, there was one thing they all shared in common and that was passion for the alma mater. Each one of them agreed that their stay at Pilani had left an indelible mark on their lives. Barun Baruah, one of the alums of this batch from Guwahati was to join others for the silver jubilee celebration in October 2005 but fate had some other design. Barun met with a road accident just before leaving for the silver jubilee reunion and succumbed to his injuries on October 7, 2005. His batch mates were shocked by the incident and pledged to do something which would keep alive the memory of their beloved batchmate. They formed a trust called the BITSAA Alumni Trust which among other activities, would try to address the needs of the Mess Workers of BITS Pilani and their families. To start with they decided to launch a group insurance scheme for the mess workers at BITS Pilani. This mess workers group insurance was launched on Sunday, 20th August 2006 at BITS, Pilani. 20th August was chosen as it happens to be the birthday for their beloved classmate Barun Baruah. This alumni batch decided to further their desire of giving shape to the programme “Giving Back to BITS”, by promoting Local Area community Development and bringing about a social transformation with special emphasis on the lesser privileged members of the society in and around the town of Pilani Rajasthan. On May 12, 2008 two alumni from this batch Sunil Nanda and Gautam Mazumdar came to Pilani and carried out extensive discussions with various officers of the Institute and drafted a Memorandum of Understanding between the Alumni Trust and BITS Staff Housing Kalyan Samiti, Pilani, Rajasthan. As per this MoU, the Alumni Trust has proposed to construct an appropriate facility to be used as a centre for LOCAL COMMUNITY DEVELOPMENT on a tract of land offered for this purpose by the BITS Staff Housing Kalyan Samiti, Pilani. The Centre shall be constructed in such a manner that allows for future expansion and/or modification. A coordination committee headed by the President of the BITS Staff Housing Kalyan Samiti (Director, BITS) as the Chairman and consisting of two Members nominated each from the BITS Staff Housing Kalyan Samiti and the Trust was also constituted to plan, coordinate and monitor the activities of the LOCAL AREA COMMUNITY DEVELOPMENT CENTRE within the framework of the objectives and rules of both the parties. The same day the MoU was signed by Sunil Nanda on behalf of the Alumni trust and Prof M K Kashiramka who is the Convener for the BITS Staff Kalyan Samiti. Sunil Nanda, Gautam Mazumdar, Chandan Sengupta and Shivas who are the key four in the forefront of this mission from 75-80 batch camped at BITS Pilani from 26 Feb itself to take the community centre project forward. The groundbreaking ceremony for starting the construction work for the community centre took place on Sunday February 28, 2010 at 1 PM at Gyan Vihar opposite to the ISKON Temple. Prof LK Maheshwari Vice Chancellor BITS Pilani was the chief guest for the same. Apart from senior officers of BITS Pilani, Proud to be BITSian Dr Chandra Shekhar Director CEERI Pilani also graced the occasion. Sri Jayesh Kharbanda, Sri Rakesh Kapoor and Sri Anil Narayan from 75-80 batch also made it to Pilani for attending the event. The huge turnout of BITS students volunteers from NIRMAAN reiterates the passion quotient for the project.It is indeed a matter of pride that PRATHAM, which is a pan-India NGO and a winner of CNN-India Person of the Year 2009, have shown interest in participating in this mission with passion. Alumni of BITS Pilani spread across the globe who would like to particiapte in this project may contact Proud to be BITSian Sunil Nanda Email sunil_nanda_blr(at)yahoo.com Mobile 91-9845067434About BITS Pilani: The Birla Institute of Technology and Science - BITS Pilani is a Deemed to be University established vide Sec.3 of the UGC Act, 1956 under notification No. F.12-23/63.U-2 of June 18, 1964. NAAC - National Assessment and Accreditation Council reaccredited BITS with 3.71 CGPA out of 4 and awarded "A" grade "Very Good" status. It is indeed a matter of pride that for the year 2009, BITS Pilani has been ranked among the top ranking universities along with IITs in various Magazine surveys such as India Today, Outlook, LiveMint DataQuest etc. BITS offers degrees in various disciplines presently at Pilani, Dubai, Goa and Hyderabad campuses. BITS Pilani has done pioneering work in industry university collaborations in terms of Practice School and Work Integrated Learning Programmes. Alumni of the Institute who are Proud to be BITSians and ambassadors for Brand BITS Pilani are spread across all continents from Australia to America.Dr BR Natarajan Professor & Vice President BITS Alumni Association - BITSAA BITS Pilani Rjasthan 33303 India Phone 91-1596-242210 Fax 91-1596-244183 Email brnt(at)bits-pilani.ac.in Website www.bits-pilani.ac.in

03-04-2010 | Arts & Culture
BITS Pilani Rajasthan
Prof Nirupama from BITS Pilani invited to attend UNESCO International Mother Lan …
It is known that we dissect nature along lines laid down by our native language and that language is not simply a reporting device for experience but a defining framework for it. Language is the armory of the human mind, and at once contains the trophies of its past and the weapons of its future conquests. No one has any doubt that language shapes the way we think, and determines
02-23-2010 | Energy & Environment
BITS Pilani Rajasthan
BITS Pilani Rajasthan Green and Sustainable Chemistry National Conference Conclu …
There is no doubt that the issue in hand is all about maintaining a state of harmony between humans and nature and remembering Mahatma Gandhi's saying "There is a sufficiency in the world for man's need but not for man's greed." Green and sustainable chemistry is an important interdisciplinary area of innovation aimed at conservation of natural resources and the protection of environment. Sustainable development has become the accepted goal
02-22-2010 | Energy & Environment
BITS Pilani Rajasthan
Green Globe Foundation YUVA Award for BITS Pilani Chemical Engineering Student R …
It is known that Climate change not only impacts the ecology but has far-reaching consequences for the society, culture, and politics of the nations. Youth who bear the brunt of the negative impacts of climate change, also symbolize a great force in combating it and carry immense potential to be the flag bearers of change. Youth have the potential to be the change-makers, who through their knowledge, observations and action, can
02-18-2010 | Science & Education
BITS Pilani Rajasthan
Pilgrimage to BITS Pilani Rajasthan by Dr Amitava Babi Mitra Associate Director …
Dr. Amitava ‘Babi’ Mitra has over two decades of leadership experience in academia and business, both in India and USA, spanning higher education, corporate e-learning, multimedia based training, educational technology and distance education. Babi’s rich experience include his engagement with NERCOMP (NorthEast Regional Computing Program) and EDUCAUSE which is a nonprofit association whose mission is to advance higher education by promoting the intelligent use of information technology. Babi presently is

02-23-2018 | IT, New Media & Software
ReportsWeb
Alumni Management Software Market 2021 with Availability of Open-Source Alumni S …
The performance of a university or college includes performance monitoring, program evaluation, and alumni activities. Alumni engagement is vital for educational institutions because of the benefits like fundraising, placement opportunities for the current students, and staying connected with the alumni network across the globe. Publisher's analysts forecast the global alumni management software market to grow at a CAGR of 8.45% during the period 2017-2021. Free| Request sample copy @ http://www.reportsweb.com/inquiry&RW0001859325/sample The low price
05-06-2011 | Business, Economy, Finances, B …
Almeda University
Official Almeda University Alumni LinkedIn Group Launched
Almeda University Announces: Congratulations to our Official Almeda University Alumni LinkedIn Group. It was launched on February 25, 2011, by the end of the week we had over 1,000 members registered. It is becoming the place for discussion and viewpoints on Life Experience Education. Our Alumni group can feel comfortable to share beliefs and success stories with their peers. They know they can find camaraderie and inspiration
06-07-2010 | Science & Education
Independence University
Independence University to Launch Alumni Association
Salt Lake City, UT, June 02, 2010 – In a move to provide continued service to its graduates, Independence University will soon launch an alumni association. Seeking active involvement of its students in the formation of the alumni association, the university is soliciting feedback on the students’ expectations from such an organization. For this purpose, Independence University has introduced a new “Alumni” section on the Student/Faculty page of their website. The Alumni
06-19-2009 | Politics, Law & Society
Gardere Wynne Sewell LLP
Gardere’s Bayer Given Alumni Service Award By Bowdoin Alumni Council
DALLAS – Attorney Mark Bayer, a partner in the Dallas office of Gardere Wynne Sewell LLP, was given the 2009 Alumni Service Award by the Bowdoin College Alumni Council. Mr. Bayer, Bowdoin class of 1979, received the award in recognition of his record of volunteer service to the college. He was President of the Alumni Council, has chaired the Executive Committee, Minority Committee and Nominations Committee, and has also served
12-17-2008 | Science & Education
Manipal University
Manipal University Alumni Meet 2008
Manipal University is organizing for the first time an Alumni Meet at the University level covering all the twenty constituent institutions including Mangalore and Bangalore campuses. The inaugural function will be held on the 19th of December 2008 at Chaitya Hall, Valley View International, Manipal at 6 pm. Dr Pitchaiah Mandava, Baylor College of Medicine, Houston, USA will be the Chief Guest, Dr Vasanth Kumar, Registrar Rajiv Gandhi University of
05-15-2008 | Associations & Organizations
eXebs - the alumni association of the European Business School (EBS, Oestrich-Winkel, Germany)
EBS Alumni opens new China Office as first German alumni association to meet gro …
Beijing, May 10, 2008: EBS Alumni is proud to announce the inception of its China Office, the first overseas office of any German alumni club. Approved by unanimous Board decision, the move ushers in the second phase of the EBS Alumni globalization strategy, an ambitious multi-year blueprint for international expansion. Besides meeting growing communication needs for Chinese universities and alumni clubs, EBS Alumni China Office is already being
Comments about openPR
OpenPR is clearly structured and remains true to its principle of confining itself to the essential parts. OpenPR has proven to be a very good and reliable partner to our media agency: Within the shortest time the releases are online and go down well with the media representatives. The success of OpenPR is reflected in the steadily increasing number of press releases. It is good that OpenPR exists!
Ursula Koslik, Director Marketing & PR, F+W Hamburg