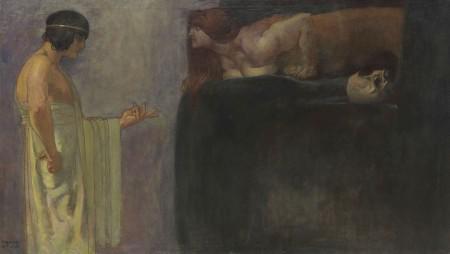 Munich, 26 November 2016, (kk) – The auction of 19th Century Art provided a successful start into the autumn auction season at Ketterer Kunst in Munich. The increasing popularity of this segment was underlined by 40% first time buyers. Total proceeds add up to around EUR 1 million* and even slightly exceled last year's figures. A mysterious work by Franz von Stuck was particularly popular. Franz von Stuck's “Ödipus löst das Rätsel der Sphinx” (lot 93) used to be on display as a loan at “Villa Shatterhand” of Karl May's widow in Radebeul. Now the painting from 1891 has found a new home in the south of Germany. After it had been called up at EUR 180.000, a collector from Bavaria was the lucky winner of a fierce bidding battle for the day's top lot. Her bid of EUR 412,500* did not only stop bidders in the packed salesroom and a large number of written bids, but also a fierce competitor on the phone from abroad.Works by Leo Putz also occupied top positions in the list of desired objects. Both his oil painting “Tanzende Negerinnen“ (lot 96), called up at EUR 24,000 and lifted to a result of EUR 30,000* against, among others, a persistent phone bidder from Hesse, as well as his work “Kampenwand VI“ (lot 145), soaring from a calling price of EUR 8,000 to a result of EUR 40,000*, will go to Bavarian private collections. An art lover from Brandenburg was willing to pay more than a three-fold of the calling price of EUR 8,000 for Karl Hagemeister's decorative oil painting “Wasserrosen“ (lot 85). Her bid of EUR 27,500* relegated bidders in the salesroom, written bids and half a dozen phone calls from all over Germany to places second and beyond.A new client from the southern German region made Carl Blechen's contemplative scene of a meditating “Mönch auf der Terrasse“ (lot 64) sure for himself for a result of EUR 25,000*, while the contentedly resting “Alte Näherin“ (lot 20) by Fritz von Uhde was called up at EUR 19,000 and sold for EUR 23,750* to an art lover near Berlin. An excellent increase was realized for Carl von Marr's “Vier weibliche Akte auf einer Wiese mit Schwertlilien” (lot 95, calling price: EUR 2,600). The gracile ladies were not only popular with German bidders but also with an art dealer from Hong Kong, however, eventually a Bavarian collector carried the trophy home for a result of EUR 20,000*.Numerous works on paper were also in quite some demand, first and foremost 13 pencil drawings of a “Reise nach Norwegen“ (lot 33) by Friedrich Preller the Elder, called up at EUR 4,300 a bidder from New York faced heavy resistance from Germany and Switzerland until he was able to stand his grounds with a result of EUR 17,500*.Next to seven watercolors and pencil drawings by Anton von Werner (lots 50-57), which were all sold with excellent increases (with prices up to EUR 2,250*), as well as eight drawings (lots 42-49) by Adrian Ludwig Richter (results up to EUR 750*), works by Ludwig von Hofmann were particularly sought-after. Six of his chalk drawings and a woodcut were sold, the most popular lot, however, was the small pastel “Heißer Tag“ (lot 105). A Hessian collector lifted the work from its calling price of EUR 2,600 to a result of EUR 6,250*.Excellent increases were also realized by, among others, the following lots:Lot no. Artist Title Calling pric Result Lot 091, Alexander Koester (oil), Sechs Enten im Wasser. Calling price EUR 16,000, result EUR 22,500* Lot 135, Wilhelm Trübner (oil), Blick auf die (…) Allee. Calling price EUR 7,000, result EUR 11,250* Lot 014, Carl Spitzweg (oil), Wanderer … Calling price EUR 7,200, result EUR 11,250* Lot 152, Christian Landenberger (oil), Betendes Mädchen. Calling price EUR 1,700, result EUR 11,000* Lot 139, Karl Theodor Boehme (oil), Meeresbrandung. Calling price EUR 1,200, result EUR 9,375*Unsold objects can be acquired in the post auction sale until 23 December 2016. The result list is available by phone on +49-(0)89-552440. * The rounded result is the hammer price + 25 % commission for hammer prices up to EUR 500.000. The share of the hammer price that exceeds EUR 500.000 is subject to a commission of + 20 % added to the commission charged for the share up to EUR 500.000.Since it was founded in 1954, Ketterer Kunst has been on the forefront of auction houses dealing in Fine Art and Rare Books, with its headquarters in Munich, and a branch in Hamburg. Representatives' offices in Berlin, Heidelberg, Dusseldorf, Italy and the US have contributed substantially to the company's success. In addition, exhibitions, special thematic and charity auctions as well as monthly online auctions at www.ketterer-internet-auction.com are regular events at Ketterer Kunst. Robert Ketterer is owner and CEO of Ketterer Kunst.Your press contact: Ketterer Kunst Joseph-Wild-Str. 18 81829 München Michaela Derra M.A. Telefon: +49-(0)89-55244-152 Fax: +49-(0)89-55244-177 E-Mail: m.derra@kettererkunst.de www.kettererkunst.de Client inquiries: Sarah Mohr, M.A. Telefon: +49-(0)89-55244-147, Fax:-177 E-Mail: s.mohr@kettererkunst.de www.kettererkunst.de

You can edit or delete your press release Ketterer Kunst Auction in Munich – 19th Century Art - The Riddle's Answer for EUR 412,500* here