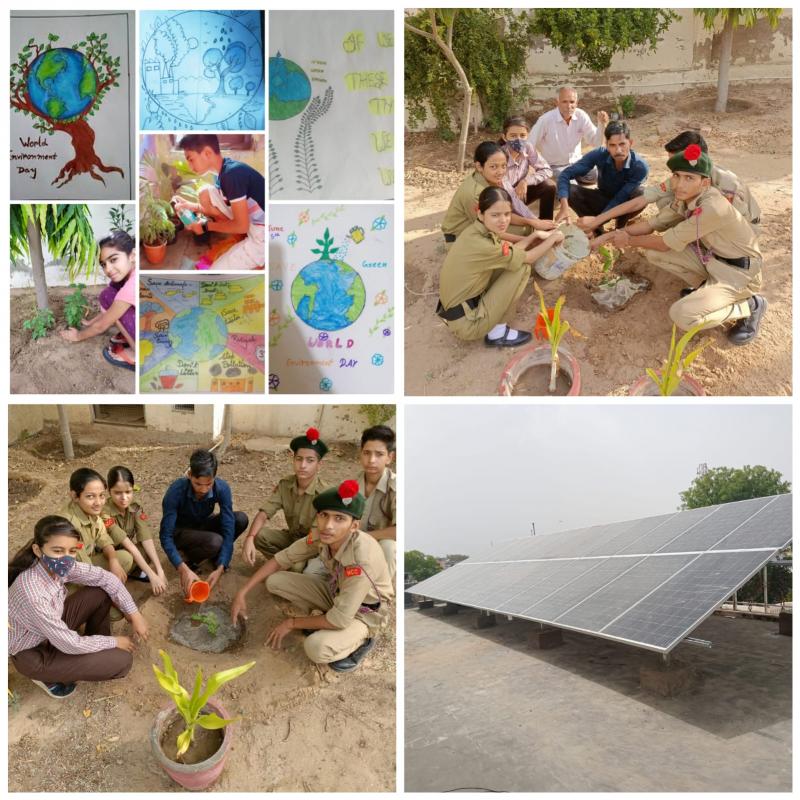 The United Nations designated 5th June every year to be celebrated as World Environment Day to highlight that the protection and health of the environment is a major issue, which affects the well being of humans and economic development throughout the world. This day indeed provides everyone an opportunity to broaden the basis for an enlightened opinion and responsible conduct by individuals, enterprises and communities in preserving and enhancing the environment. "Only One Earth" is the slogan for 2022.Earth's natural systems with its richness, diversity but limited resources cannot keep up with never ending demands of growing population. The message by UN Secretary General António Guterres fot the day is "This year and the next will present more opportunities for the global community to demonstrate the power of multilateralism to tackle our intertwined environmental crises, from negotiations on a new global biodiversity framework to reverse nature loss by 2030 to the establishment of a treaty to tackle plastics pollution."Smt. Jamuna Mishra Academy JMA popularly known as school with year after year 100% results established in the year 2004 is presently one of the most sought after schools at Pilani considered as Oasis in the desert state of Rajasthan. It is a matter of great pride that alumni of JMA are presently pursuing higher education in various institutions which include Institution of Eminence BITS Pilani and second best women's university in the world NAAC A++ UGC Category1 Banasthali Vidyapith. JMA Pilani has established a rich tradition of observing various days of international and national importance on a regular basis. While most institutions use World Environment Day to do photo finish operation of tree plantation. JMA has truly taken multidimensional efforts to protect the environment worth emulating by others. In the recently concluded summer camp, students were encouraged to produce useful items from waste. JMA in Pilani is well known as champion for putting an end to single use plastics. Like a leader who knows the way, goes the way and shows the way, JMA Pilani has installed state of the art 10KW Solar Power generation system to meet its energy demands. The school has also commissioned rain water harvesting system to store 15000 litres below ground. To commemorate the day, on Sunday 05 Jun 2022, Principal Mrs Booma Natarajan along with Shri Mahendra Kumar care-taker NCC officer beating the heat led the passion packed cadets to plant the saplings. For more details about JMA Pilani see http://www.jmapilani.org/Default.aspxMrs Booma Natarajan, M.Sc., M.A., B.Ed. Principal, Jamuna Mishra Academy - JMA Pilani Rajasthan 333031 India Phone 91-1596-242314 Email booma_pilani at yahoo.co.in Website: http://www.jmapilani.org/Default.aspx FaceBook: https://www.facebook.com/JMAPilaniRajasthanRank1/About JMA Pilani: Jamuna Mishra Academy - JMA Pilani is a Co-educational English Medium School with Experienced Teachers, Spacious Classrooms and Modern Amenities designed to impart Quality Education combined with All Round Personality Development and lay the Best Foundation for the Child's Future. While the school admits both boys and girls, the girl student enrollment has been steadily rising every year and is presently nearly 50% of the total strength. Right from its inception, JMA Pilani has embarked on a rich tradition of celebrating various days of national and international significance and festivals which makes it a cut above the rest schools in Pilani. The school has for boys and girls Scout and NCC, girls' band which has been winning laurels every year. NCC cadets of JMA Pilani have also been selected for participation in Republic Day Camp RDC and Shivaji Trail Trek. Yoga, Karate, Painting and Music are not just part of school routine but a way of life for the students. It is a matter of great pride that JMA Pilani is referred popularly as the school with 100% Results on account of outstanding results year after year in Board of Secondary Education Rajasthan RBSE Class X and Class 12. For more details about JMA Pilani see http://www.jmapilani.org/Default.aspx