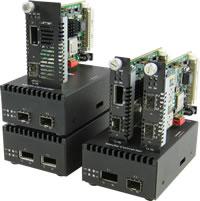 NASHVILLE, TN—September 19th, 2012— Perle Systems, a global provider of advanced Ethernet over Fiber and secure device networking solutions, today introduces 10 Gigabit Ethernet Media Converters. 10GbE Media Converters solve the problem of creating a 10 Gigabit Ethernet link that can be extended from 26 meters up to 160km.The demand for 10GbE is being driven by companies who want their data centers equipped to take advantage of the better performance and lower latency offered by 10GbE. Crehan Research predict in their July 2011 Server-class Adapter & LOM Long-range Forecast Tables that 10GbE will see market expansion at over 50 percent annually during the next four years, from around $400 million today to more than $1 billion by 2014.However, as 10 Gigabit Ethernet grows in dominance, so do the number of users who need to overcome transmission distance limitations inherent in fiber and copper cabling.“10G Media Converters solve the problem when data needs to be transmitted over fiber between two switches located up to 160km apart,” says John Feeney, COO of Perle Systems. “They are also ideal for large data centers where the distance to connect top of rack switches exceeds the 100 meter limitation of 10G copper.”Perle 10G Media Converters come with two pluggable transceiver ports that support fiber to fiber, copper to fiber or copper to copper media conversion. These ports allow for flexible network configurations to meet any requirement using a variety of 10G transceivers supplied by Perle, Cisco or other manufacturers of MSA compliant SFP+ and XFPs.Perle offers over 765 models of Managed and Unmanaged Media Converters to transmit 10BaseT, Fast Ethernet, Gigabit and 10 Gigabit Ethernet over fiber. All Perle Media Converters use high-end components and have an on-board microcontroller to deal with link error detection and recovery. Perle also supplies a Lifetime Warranty as a standard feature across all major product lines.About Perle Systems www.perle.com Perle Systems is a leading developer, manufacturer and vendor of high-reliability and richly featured connectivity and device networking products. These products are used to connect remote users reliably and securely to central servers for a wide variety of business applications. Product lines include Console Servers for Data Center Management, Terminal Servers, Device Servers, Remote Power Switches, Media Converters, Ethernet I/O, Serial Cards, Parallel Cards and Multimodem Cards. Perle distinguishes itself through extensive networking technology, depth of experience in major real-world network environments and long-term distribution and VAR channel relationships in major world markets. Perle has offices in 9 countries in North America, Europe and Asia and sells its products through distribution and OEM/ODE channels worldwide.Perle Systems830 Fesslers Parkway, Suite 108 Nashville, TN 37210Contact Person:Julie Mc Daniel VP Marketing Phone: 1-800-46703753pr@perle.com www.perle.com

10-30-2018 | Media & Telecommunications
Perle Systems
Perle launches Modular Console Servers for In-Band and Out-of-Band-Management
Support for up to 50 USB and RS232 Console Ports, redundant copper and fiber Ethernet network access, WiFi network access and a V.92 modem connection NASHVILLE, TN—October 30th, 2018 — Perle Systems, a global provider of advanced serial to Ethernet and device networking hardware, today released the IOLAN SCG Secure Console Servers as an advanced IT Infrastructure Management Solution. Most devices today can be accessed directly over an Ethernet network. However,
09-13-2018 | IT, New Media & Software
Perle Systems
Does name dropping…(Broadcom)…work?
If I tell you that Broadcom uses my product in their R&D labs, do you care? Broadcom has been a Fortune 500 company since 2009. They employ 11,750 people worldwide in more than 15 countries. Their turnover in 2017 was $17.636 billion. Broadcom chips are used in smartphones, data storage gear, set-top boxes and networking hardware. Customers include Apple, Samsung Electronics, Hewlett Packard Enterprise, Dell, AT&T and Cisco. Heck, according
08-08-2018 | IT, New Media & Software
Perle Systems
Creating High-Speed Internet Access across a Mountaintop, over 12 Inches of Radi …
You know the feeling when you find yourself in a remote area of the country and the internet access is…umm… ”slow”, is the nice word. You can access your email and perhaps see what is going on in the world of social media but, streaming a video, having a video conference or downloading large files is not going to reliably happen. Well, if this problem can be solved at a
07-10-2018 | IT, New Media & Software
Perle Systems
“Laptops do weird things at -60°F”
If I ever find myself in the remote Alaskan interior, I would like to meet Mike Spooner, Telecom and Infrastructure Technician at the Sumitomo Pogo Mine. Why? This man is a story teller. A good story teller. So good, that he can make a story about setting up a networked virtual serial port extremely entertaining. Okay, I sense your doubt, and I don’t blame you. There can’t possibly be anything more