Creating High-Speed Internet Access across a Mountaintop, over 12 Inches of Radial Ice, in -20°F 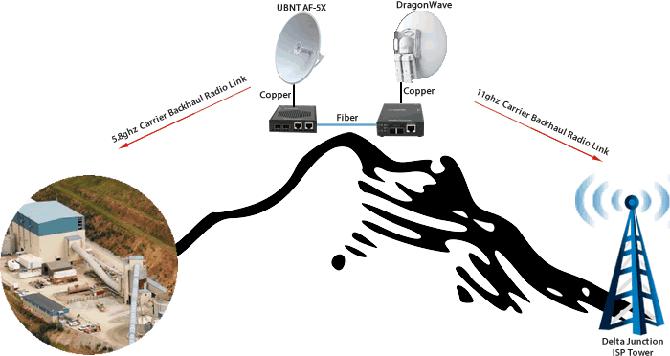 You know the feeling when you find yourself in a remote area of the country and the internet access is…umm… ”slow”, is the nice word. You can access your email and perhaps see what is going on in the world of social media but, streaming a video, having a video conference or downloading large files is not going to reliably happen. Well, if this problem can be solved at a remote mining camp deep in the Alaska interior, it can be solved anywhere.Pogo Mine, 38 miles northwest of Delta Junction, operates like a small town. It provides accommodation, medical care, food, and more, for 450 people living and working on-site. Between the camp and Delta Junction is "40mi mountaintop". It gets its name by being located at mile-marker 40 on the 50-mile access road that connects the mine to the town.From 2011 thru 2016, the “morale network”, which enabled everyone on site to stay in touch with loved ones by checking their email, calling home and accessing the internet consisted of a pair of 20mb Ethernet Circuits and a pair of T1’s. While this was sufficient, people longed for the bandwidth that would allow them speedy access to multimedia content. However, installing a fiber line to Delta Junction would cost $6.6 million and that kind of spend was out of the question. In early 2017, Mike Spooner, Telecom and Infrastructure Technician for Sumitomo Metals Mining Pogo LLC, found a solution."It came to my attention that a local WISP had their own telco tower in Delta Junction, with a direct fiber connection to two ISPs", explains Spooner. "This was a breakthrough. After a substantial amount of research, we figured out we could install a 11ghz link from Delta Junction to 40Mi [mountaintop], and a 5.8ghz link from 40mi [mountaintop] back to the mine for less than one month’s cost of our current internet bill."Spooner continues, "As the design came together, we realized that the 11ghz microwave had to be on one side of the mountain and the 5.8ghz had to be on the other side, about 100ft apart. Since it is the highest mountaintop around and trying to achieve ‘ground’ on solid rock is very problematic, we decided that eliminating the electrical route between the two systems was the best way to go. Perle had already proven themselves to me as being able to handle our rough environment, so they were the first place I looked when I needed Fiber to Ethernet."Due to lightning risk, Spooner decided to heavily ground the structures, install double lightning isolation on the power leads, and run optical fiber for the four Gigabit links needed by the radio equipment. Perle SFP Media Converters were used to provide addition copper to fiber conversion ports that were not natively availble in the equipment being installed. For more details about the installation and equipment used, read the original Case Study here.Spooner concludes, "Everything seems to be working just grand, even during all the torture mother-nature throws at us. The Perle Media Converters haven’t dropped a single frame or packet since they were turned on, even in -20°F temperatures and over 12 inches of radial ice!"About Perle Systems - www.perle.comPerle Systems is a leading developer, manufacturer and vendor of high-reliability and richly featured connectivity and device networking products. These products are used to connect remote users reliably and securely to central servers for a wide variety of business applications. Product lines include Console Servers for Data Center Management, Terminal Servers, Device Servers, Remote Power Switches, Media Converters, Ethernet I/O, Serial Cards, Parallel Cards and Multimodem Cards. Perle distinguishes itself through extensive networking technology, depth of experience in major real-world network environments and long-term distribution and VAR channel relationships in major world markets. Perle has offices in 9 countries in North America, Europe and Asia and sells its products through distribution and OEM/ODE channels worldwide.Perle Systems830 Fesslers Parkway, Suite 108 Nashville, TN 37210Contact Person: Julie Mc Daniel VP Marketing Phone: 1-800-46703753 email: pr@perle.com

You can edit or delete your press release Creating High-Speed Internet Access across a Mountaintop, over 12 Inches of Radial Ice, in -20°F here

10-30-2018 | Media & Telecommunications
Perle Systems
Perle launches Modular Console Servers for In-Band and Out-of-Band-Management
Support for up to 50 USB and RS232 Console Ports, redundant copper and fiber Ethernet network access, WiFi network access and a V.92 modem connection NASHVILLE, TN—October 30th, 2018 — Perle Systems, a global provider of advanced serial to Ethernet and device networking hardware, today released the IOLAN SCG Secure Console Servers as an advanced IT Infrastructure Management Solution. Most devices today can be accessed directly over an Ethernet network. However,
09-13-2018 | IT, New Media & Software
Perle Systems
Does name dropping…(Broadcom)…work?
If I tell you that Broadcom uses my product in their R&D labs, do you care? Broadcom has been a Fortune 500 company since 2009. They employ 11,750 people worldwide in more than 15 countries. Their turnover in 2017 was $17.636 billion. Broadcom chips are used in smartphones, data storage gear, set-top boxes and networking hardware. Customers include Apple, Samsung Electronics, Hewlett Packard Enterprise, Dell, AT&T and Cisco. Heck, according
07-10-2018 | IT, New Media & Software
Perle Systems
“Laptops do weird things at -60°F”
If I ever find myself in the remote Alaskan interior, I would like to meet Mike Spooner, Telecom and Infrastructure Technician at the Sumitomo Pogo Mine. Why? This man is a story teller. A good story teller. So good, that he can make a story about setting up a networked virtual serial port extremely entertaining. Okay, I sense your doubt, and I don’t blame you. There can’t possibly be anything more
06-15-2018 | IT, New Media & Software
Perle Systems
SmartSky Networks manage Air-to-Ground (ATG) 4G In-Flight Broadband Network with …
Today’s travellers expect roaming broadband connections wherever they go. However, while on-board an airplane, passengers and crew find that existing broadband services are expensive, slow or non-existent. SmartSky Networks is tackling the challenge to give full in-flight access to email, SMS, social media and online video streaming services via smartphones, tablets and laptops. A new Air-to-Ground (ATG) network based on 4G LTE technology has been implemented by SmartSky Networks. Over 250 ground-based

09-16-2020 | Media & Telecommunications
SmartWork Media
SmartWork Media Acquires ST Media Group Intl.
MONTCLAIR, NJ (September 15th, 2020) – SmartWork Media (www.smartworkmedia.com) has acquired all B2B titles, events, and digital media products of ST Media Group International (www.stmediagroupintl.com). The acquisition of titles is a strategic initiative to integrate the intellectual property of both organizations to create a more dynamic media company that is well positioned to meet the evolving needs of marketers in each respective industry. “SmartWork Media has a stable of powerful award-winning
08-13-2020 | Arts & Culture
New Media Film Festival
New Media Film Festival
INNOVATIVE STORIES & TECHNOLOGY CREATORS FINALLY HAVE THEIR DAY – AUGUST 15TH 2020 NEW MEDIA FILM FESTIVAL AWARDS SHOW The 121 New Media Films & Content from 32 countries that are nominees in the 11th Annual New Media Film Festival® voted. Resoundingly the nominees voted to have an online awards ceremony and forgo an in person festival this year. With 38 World – 15 U.S., and 30 L.A. Premieres and the
09-11-2017 | IT, New Media & Software
kbvresearch
Social Media Analytics Market
According to a new report, “Global Social Media Analytics Market (2017 – 2023)”, published by KBV research, the Global Social Media Analytics Market size is expected to reach $11.6 billion by 2023, rising at a market growth of 28.6% CAGR during the forecast period. The North America market holds the largest market share in Global Social Media Analytics Services Market by Region in 2016, and would continue to be a dominant
10-01-2013 | IT, New Media & Software
Kaleidoscope GmbH
Terminology goes Social Media
The importance of terminology is constantly increasing. Companies struggle to introduce an overall process and to enable the users to benefit from standardized language resources. Often, the key question is: "How do I find and, above all, motivate fellow colleagues for the common cause?" With the new version 5.3 quickTerm now offers many new features especially for these challenges. The wheel of collaborative workflows does not have to be re-invented for
12-13-2011 | IT, New Media & Software
Global Forestry Investments
Brazil's social media boom
The social media craze has been hitting Brazil as the emerging BRIC nation is reportedly becoming one of the most avid consumers of social media in the world. With an estimated 75 million internet users, it is believed that 23 percent of users regularly use Twitter, making that the highest usage anywhere in the world. Back in February, Facebook users in Brazil stood at 10 million. Today, that number
10-04-2011 | Business, Economy, Finances, B …
ngc
MEDIA ADVISORY
Meet the team of National Gift Card (NGC), the leading marketer and supplier of gift cards for use in loyalty, incentive and rewards programs. The agency offers more than 175 major retail, restaurant and prepaid cards along with full-service marketing support, secure online ordering, distribution, fulfillment services and customized programs designed to reach each client’s specific objectives. NGC representatives will be on hand both days to answer media questions about the
Comments about openPR
We publish our press releases on openPR.de because we like people who are "open" - just like us.
Frank Obels, CEO, INCONET - Informationssysteme, Communication und Netzwerkberatung GmbH