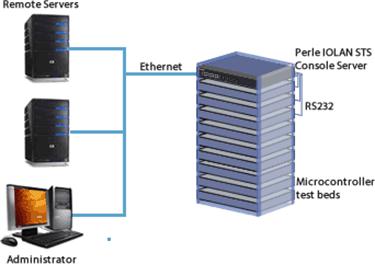 If I tell you that Broadcom uses my product in their R&D labs, do you care? Broadcom has been a Fortune 500 company since 2009. They employ 11,750 people worldwide in more than 15 countries. Their turnover in 2017 was $17.636 billion. Broadcom chips are used in smartphones, data storage gear, set-top boxes and networking hardware. Customers include Apple, Samsung Electronics, Hewlett Packard Enterprise, Dell, AT&T and Cisco. Heck, according to their company history page, they introduced the first fiber optic transmitters and receivers for data communications before the first Millennial was born.So, if a company this big, this successful, this established, chooses to use my product in their R&D labs does that mean anything? To stay ahead of the competition, Broadcom invests more than $800 million dollars per quarter in R&D labs around the world. Surely, to become as successful as they are, they know how to make good decisions regarding the equipment used in those labs. Quality must be important. They would not... could not… risk their success by using sub-par equipment and devices. So, the fact that they choose to use Perle proves that Perle meets their high performance, security and reliability standards.For many years, Broadcom has been using Perle IOLAN Terminal Servers in their labs. Serial data acquired from microcontroller test beds in the lab is sent over Ethernet to remote servers using Perle Terminal Servers as the interface.To date, thousands of IOLAN Terminal Servers have been installed in numerous Broadcom locations around the world. So, if you are interested in Serial to Ethernet conversion products, that that already ready been tested and approved by a quality company like Broadcom, you can learn more about Perle here.About Broadcom: www.broadcom.comBroadcom Limited is a diversified global semiconductor leader built on 50 years of innovation, collaboration and engineering excellence. With roots based in the rich technical heritage of technology powerhouses AT&T/Bell Labs, Lucent and Hewlett-Packard/Agilent, Broadcom focuses on technologies that connect our world. With the addition of industry leaders LSI, Avago Technologies and Broadcom Corporation, the company has the size, scope and engineering talent to continue leading the industry into the future.About Perle Systems www.perle.comPerle Systems is a leading developer, manufacturer and vendor of high-reliability and richly featured connectivity and device networking products. These products are used to connect remote users reliably and securely to central servers for a wide variety of business applications. Product lines include Console Servers, Terminal Servers, Device Servers, Media Converters, Ethernet Copper Extenders, Ethernet I/O, Serial Cards, Parallel Cards, Remote Power Switches and Multimodem Cards. Since 1976, Perle has distinguished itself through extensive networking technology, depth of experience in major real-world network environments and long-term distribution and VAR channel relationships in major world markets. Perle has offices in 9 countries in North America, Europe and Asia and sells its products through distribution and OEM/ODE channels worldwide.Julie McDaniel VP Marketing pr@perle.comPerle Systems Inc. 830 Fesslers Parkway, Suite 108 Nashville, TN 37210 Tel: +1 800-467-3753

You can edit or delete your press release Does name dropping…(Broadcom)…work? here

10-30-2018 | Media & Telecommunications
Perle Systems
Perle launches Modular Console Servers for In-Band and Out-of-Band-Management
Support for up to 50 USB and RS232 Console Ports, redundant copper and fiber Ethernet network access, WiFi network access and a V.92 modem connection NASHVILLE, TN—October 30th, 2018 — Perle Systems, a global provider of advanced serial to Ethernet and device networking hardware, today released the IOLAN SCG Secure Console Servers as an advanced IT Infrastructure Management Solution. Most devices today can be accessed directly over an Ethernet network. However,
08-08-2018 | IT, New Media & Software
Perle Systems
Creating High-Speed Internet Access across a Mountaintop, over 12 Inches of Radi …
You know the feeling when you find yourself in a remote area of the country and the internet access is…umm… ”slow”, is the nice word. You can access your email and perhaps see what is going on in the world of social media but, streaming a video, having a video conference or downloading large files is not going to reliably happen. Well, if this problem can be solved at a
07-10-2018 | IT, New Media & Software
Perle Systems
“Laptops do weird things at -60°F”
If I ever find myself in the remote Alaskan interior, I would like to meet Mike Spooner, Telecom and Infrastructure Technician at the Sumitomo Pogo Mine. Why? This man is a story teller. A good story teller. So good, that he can make a story about setting up a networked virtual serial port extremely entertaining. Okay, I sense your doubt, and I don’t blame you. There can’t possibly be anything more
06-15-2018 | IT, New Media & Software
Perle Systems
SmartSky Networks manage Air-to-Ground (ATG) 4G In-Flight Broadband Network with …
Today’s travellers expect roaming broadband connections wherever they go. However, while on-board an airplane, passengers and crew find that existing broadband services are expensive, slow or non-existent. SmartSky Networks is tackling the challenge to give full in-flight access to email, SMS, social media and online video streaming services via smartphones, tablets and laptops. A new Air-to-Ground (ATG) network based on 4G LTE technology has been implemented by SmartSky Networks. Over 250 ground-based