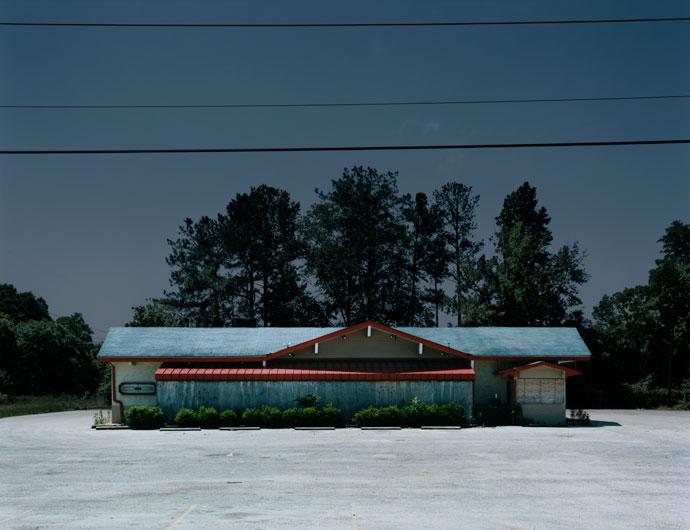 Josef Schulz: “poststructure” Opening Reception: Friday, September 14, 2012, 7pm Exhibition: through November 3, 2012Paradise Cafe. Property For Salepoststructure by Josef SchulzAbandoned buildings have a charm of their own. In stark contrast to inhabited ones, life has left them, remaining discernible all the same. In our concept of a life lived it remains present as a memory. Abandoned industrial wastelands, too, exude an air of work and manufacture. These new places of silence seem to ring with the sound of work. This is also the case with office buildings or shops. At some point these were all spaces invested with the hopes for a flourishing business, a business idea or a service and were frequented by numerous people.Düsseldorf artist Josef Schulz has always been interested in places of transition and transformation and, through his photographs, has brought their old or inner life to the surface so that we, too, can see and experience it. His main focus is the contrast between the how it was and the how it is. For his latest series he went to the United States to seek out buildings of this kind. In his customary, New-Sobriety manner he has photographed the abandoned, vacant and mostly locked and boarded up buildings which used to house shops, snack stalls, petrol stations or supermarkets. Frequently, however, we can no longer discern the original use, or owner, or function of the building. Especially then, something akin to a projection space is created in our heads or as on a film set, where the buildings with their appeal ranging from wonderfully banal to surreal are charged with an aura or an identity. We attempt to approach the freestanding buildings from all sides and to re-activate the traces of the former use of the dead building when it was alive.Therefore the photographs by Josef Schulz are also influenced by loss and resignation. Here something has failed whose origin remains hidden and whose context the images deliberately omit. America as the“land of unlimited possibilities“is the past, and unlimited impossibilities are now as present as the over-indebtedness of the Americans. Each beginning contains an ending and every failure contains an oddly shaped ruin. Consequently the photographs of the poststructure series are articulate examples of a remote, beautiful melancholy, more or less borne by the spirit of German Romanticism and melancholy. Paradise Café. Property For Sale.Text: Gregor JansenJosef Schulz (* 19 March 1966, Biskupiec) is one of the internationally most renowned German photographers and photo artists of the generation following in the footsteps of Bernd Becher and Thomas Ruff. From 1993 to 1999 he studied with Bernd Becher at the Düsseldorf Kunstakademie and from 1999 to 2001 with Thomas Ruff, whose master student he was. He lives and works in Düsseldorf.Galerie Heinz-Martin Weigand is a gallery for contemporary art. The focus of the gallery is to show the work of emerging artists from Germany, Europe and the United States.Gallery artists have been included in many important exhibitions in the last five years, such as the Venice Biennale and the Kassel Documenta. The gallery participates at most of the international artfairs (Art Cologne, Art Chicago, Art Brussels, Art Frankfurt...)Heinz-Martin Weigand Gallery Charlottenstr. 3 D-10969 Berlin Germany Phone +49.25922736 E-Mail: info@galerie-weigand.de Web: www.galerie-weigand.dePress Contact: Heinz-Martin Weigand

You can edit or delete your press release Josef Schulz, poststructure here

10-23-2012 | Arts & Culture
Galerie Heinz-Martin Weigand
Nina Lola Bachhuber: Loplop' Logik
Opening Reception: Friday, October 26, 2012, 6pm to 10pm Exhibition through: January 19, 2013 Extended opening hours on 11/2 until 10pm Nina Lola Bachhuber’s sculptures are three- dimensional representations of psychological states in which various levels of abstraction and figuration are oscillating. A strong focus on formal matters, rigorous attention to detail, an affinity to both rationality and fetish culture and the ambivalence of presence and absence are situating the work somewhere between
09-24-2010 | Arts & Culture
Galerie Heinz-Martin Weigand
Leta Peer "Room for Simon"
In her exhibition Room for Simon at the Heinz-Martin Weigand Gallery, Leta Peer once more explores her own biography in an artistic manner. Opening reception: September 24, 2010, 7pm. Duration of the exhibition: until November 13, 2010. While Leta Peer, “both in her paintings Along with Simon and in the Mirrors series of photographs achieved a spiritually communicated modern form of an expulsion from paradise”,¹ her exhibition Along with Simon (2007) now
01-29-2010 | Arts & Culture
Galerie Heinz-Martin Weigand
Exhibition Josef Schulz "sign out"
Heinz-Martin Weigand Gallery is pleased to announce an upcoming exhibition of new work by Josef Schulz: sign out. The opening reception will be on Friday, January 29, 2010 (7pm to 10pm). Exhibition from January 30 to March 27, 2010 To start off the year 2010, Galerie Weigand is showing new photographs by Josef Schulz. They can be considered an expansion of the Sachliches series of works, if one goes along with the