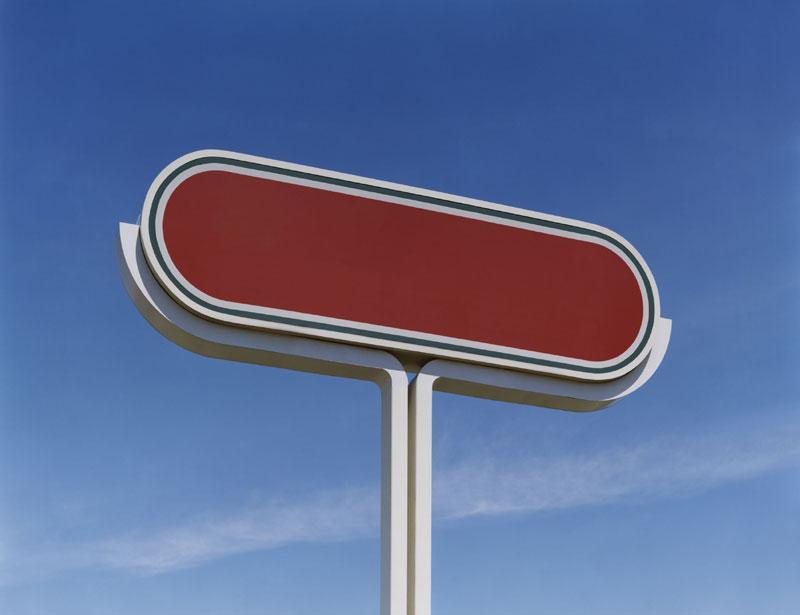 Heinz-Martin Weigand Gallery is pleased to announce an upcoming exhibition of new work by Josef Schulz: sign out. The opening reception will be on Friday, January 29, 2010 (7pm to 10pm).Exhibition from January 30 to March 27, 2010 To start off the year 2010, Galerie Weigand is showing new photographs by Josef Schulz. They can be considered an expansion of the Sachliches series of works, if one goes along with the artist’s fascination with industrial estates and suburban areas. The series is entitled Sign out, which offers an apt description of the series, for this time Schulz focuses on the great variety of billboards - as they would occur in such locations - photographed during his travels in the USA. Where they are found, these striking illuminated bodies form a second level above the buildings and indicate their respective purposes. They bear written messages and their sole purpose is to alert and seduce us.This is precisely the point at which Schulz interferes, using digital manipulation to free the billboards of their "designation", and thus of their function; he breaks off all communication, sign out. The original structure with its "form and function" is now reduced to pure form and in this way is transformed into a sculptural, artistic object.Josef Schulz reinforces this impression by making meticulous alterations on the computer, where he focuses on accentuating form, colours and sheen, or matteness. Autonomous spatial bodies are created, devoid of scratches, defects, or other traces, seemingly timeless, artificial.The object’s autonomy is the result of the perspective he chooses for his photographs. Located nowhere in particular, free from any clues to surrounding buildings or specific vegetation, only the respective skies promote speculation about the different locations. These skies, with their pastel colour gradients, stand out against the gaudily contrasted fields of colour on the billboards and their geometrical construction. Different combinations evoke different moods; the effect of a grey sky behind a white billboard is different from that of the yellow sign in front of a bright blue sky. A contrail suggests depth and expanse in the image - here one is able to discern a scale which is missing in the other photographs. There the point of view alternates between model and reality.Besides their strong aesthetic appeal there is also something inherently absurd about these more recent photographs. Their formal language is reminiscent of comic strips. Like empty speech or thought bubbles they challenge their surroundings, speak of the interchangeability of needs and reflect upon the mechanisms of one's own desires.These colourful, blank banners symbolically mark our current period of transition. In this manner, one the one hand, they signify the shattered dream, like warning proxies they comment upon the numerous closures of business in the course of the economic crisis. On the other hand, however, they seem like beacons of hope for a new beginning, they are placeholders for a wealth of new ideas in whose implementation America, as the land of opportunities, firmly believes.Josef Schulz, born 1966, studied photography with Bernd Becher and Thomas Ruff. In 2001 he was named European Architectural Photographer of the Year, in 2007 he received a grant from the ZF Art Foundation, Friedrichshafen (Germany). He lives and works in Düsseldorf.Galerie Heinz-Martin Weigand is a gallery for contemporary art. The focus of the gallery is to show the work of emerging artists from Germany, Europe and the United States.Gallery artists have been included in many important exhibitions in the last five years, such as the Venice Biennale and the Kassel Documenta. The gallery participates at most of the international artfairs (Art Cologne, Art Chicago, Art Brussels, Art Frankfurt...)Numerous publications and monographs are available on all gallery artists.Galerie Heinz-Martin Weigand Muehlenstrasse 31 D-76275 Ettlingen / Karlsruhe Germany Phone +49.7243.526262 E-Mail: info@galerie-weigand.de Web: www.galerie-weigand.dePress Contact: Heinz-Martin Weigand

10-23-2012 | Arts & Culture
Galerie Heinz-Martin Weigand
Nina Lola Bachhuber: Loplop' Logik
Opening Reception: Friday, October 26, 2012, 6pm to 10pm Exhibition through: January 19, 2013 Extended opening hours on 11/2 until 10pm Nina Lola Bachhuber’s sculptures are three- dimensional representations of psychological states in which various levels of abstraction and figuration are oscillating. A strong focus on formal matters, rigorous attention to detail, an affinity to both rationality and fetish culture and the ambivalence of presence and absence are situating the work somewhere between
09-18-2012 | Arts & Culture
Galerie Heinz-Martin Weigand
Josef Schulz, poststructure
Josef Schulz: “poststructure” Opening Reception: Friday, September 14, 2012, 7pm Exhibition: through November 3, 2012 Paradise Cafe. Property For Sale poststructure by Josef Schulz Abandoned buildings have a charm of their own. In stark contrast to inhabited ones, life has left them, remaining discernible all the same. In our concept of a life lived it remains present as a memory. Abandoned industrial wastelands, too, exude an air of work and manufacture. These new places
09-24-2010 | Arts & Culture
Galerie Heinz-Martin Weigand
Leta Peer "Room for Simon"
In her exhibition Room for Simon at the Heinz-Martin Weigand Gallery, Leta Peer once more explores her own biography in an artistic manner. Opening reception: September 24, 2010, 7pm. Duration of the exhibition: until November 13, 2010. While Leta Peer, “both in her paintings Along with Simon and in the Mirrors series of photographs achieved a spiritually communicated modern form of an expulsion from paradise”,¹ her exhibition Along with Simon (2007) now