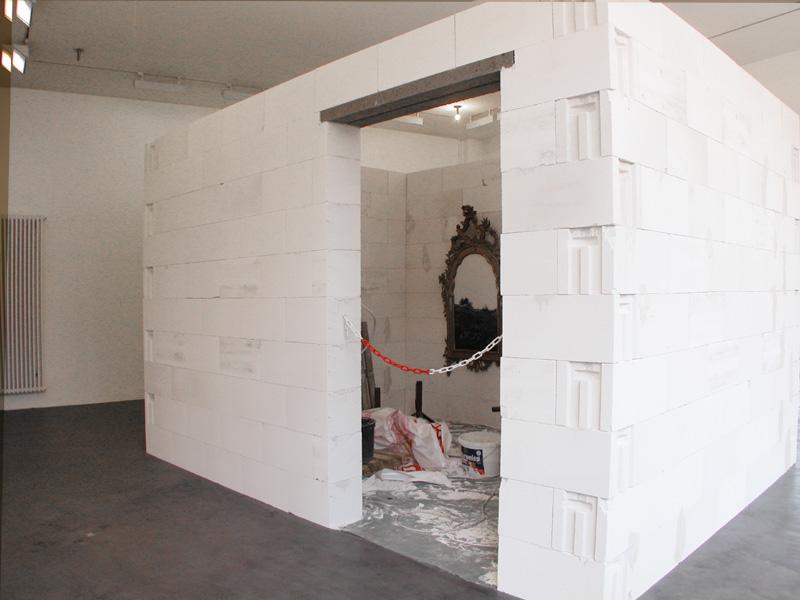 In her exhibition Room for Simon at the Heinz-Martin Weigand Gallery, Leta Peer once more explores her own biography in an artistic manner.Opening reception: September 24, 2010, 7pm. Duration of the exhibition: until November 13, 2010.While Leta Peer, “both in her paintings Along with Simon and in the Mirrors series of photographs achieved a spiritually communicated modern form of an expulsion from paradise”,¹ her exhibition Along with Simon (2007) now creates a space for contemplation, comparable to a tableau vivant, “a kind of secular chapel, whose three-dimensionality as a template for her paintings has, up to now, always been recorded in photographs and then artistically incorporated”.²A second room has been built into the gallery’s exhibition space which – beyond being a mere spatial separation – functions, on another level, as a “thought space”. Memory processes thought to have long been dealt with are – also against the background of another “visit” to the grave of her brother Simon on the Via Engadiana in July 2010 – given new room. (Virtually) isolated thanks to its clear separation from the main gallery space, this room facilitates this specific, processual way of approaching the supposed or actually undertaken processing and, at the same time, inherently and in an impressive fashion conveys the process-character by being a “work in progress” itself. Room for Simon affords us with an intimate view, without being voyeuristic, as it is unfinished, lapidary and fragmentary, not unlike memory itself, which never is able to provide us with a clearly defined image or even a complete one.The installation Room for Simon is flanked by a series of new, small-format paintings, which, in their style, differ significantly from Leta Peer’s previous paintings. They reflect the impressions gained when visiting her brother on the smugglers’ trail above Lavin, one characterised by deep ravines, abrupt drops in the rockscape and erosion, and by rapidly changing weather phenomena where dense wisps of fog one second restrict the radius and make it concise but where, only a second later, the view can be open and boundless. The new paintings have the character of a sketch and are themselves turned into hurriedly and instantly jotted down fragments of memory.Views of landscapes and family members alternate with those of villages and close and not so close acquaintances. The connection is loose and not apparent at first glance. It should be understood as a call to an increasingly changing “terrain humain”.Leta Peer was born in Winterthur, Switzerland, in 1964 and studied free painting in Basel. Since 1994 she has continuously been invited to show her work by galleries, art associations and museums all over the world.¹, ² Thomas Elsen, Augsburg, extract from catalogue text, Leta Peer, Along with Simon, Kehrer Verlag, Heidelberg, 2009Galerie Heinz-Martin Weigand is a gallery for contemporary art. The focus of the gallery is to show the work of emerging artists from Germany, Europe and the United States.Gallery artists have been included in many important exhibitions in the last five years, such as the Venice Biennale and the Kassel Documenta. The gallery participates at most of the international artfairs (Art Cologne, Art Chicago, Art Brussels, Art Frankfurt...)Numerous publications and monographs are available on all gallery artists.Galerie Heinz-Martin Weigand Muehlenstrasse 31 D-76275 Ettlingen / Karlsruhe Germany Phone +49.7243.526262 E-Mail: info@galerie-weigand.de Web: www.galerie-weigand.dePress Contact: Heinz-Martin Weigand

10-23-2012 | Arts & Culture
Galerie Heinz-Martin Weigand
Nina Lola Bachhuber: Loplop' Logik
Opening Reception: Friday, October 26, 2012, 6pm to 10pm Exhibition through: January 19, 2013 Extended opening hours on 11/2 until 10pm Nina Lola Bachhuber’s sculptures are three- dimensional representations of psychological states in which various levels of abstraction and figuration are oscillating. A strong focus on formal matters, rigorous attention to detail, an affinity to both rationality and fetish culture and the ambivalence of presence and absence are situating the work somewhere between
09-18-2012 | Arts & Culture
Galerie Heinz-Martin Weigand
Josef Schulz, poststructure
Josef Schulz: “poststructure” Opening Reception: Friday, September 14, 2012, 7pm Exhibition: through November 3, 2012 Paradise Cafe. Property For Sale poststructure by Josef Schulz Abandoned buildings have a charm of their own. In stark contrast to inhabited ones, life has left them, remaining discernible all the same. In our concept of a life lived it remains present as a memory. Abandoned industrial wastelands, too, exude an air of work and manufacture. These new places
01-29-2010 | Arts & Culture
Galerie Heinz-Martin Weigand
Exhibition Josef Schulz "sign out"
Heinz-Martin Weigand Gallery is pleased to announce an upcoming exhibition of new work by Josef Schulz: sign out. The opening reception will be on Friday, January 29, 2010 (7pm to 10pm). Exhibition from January 30 to March 27, 2010 To start off the year 2010, Galerie Weigand is showing new photographs by Josef Schulz. They can be considered an expansion of the Sachliches series of works, if one goes along with the