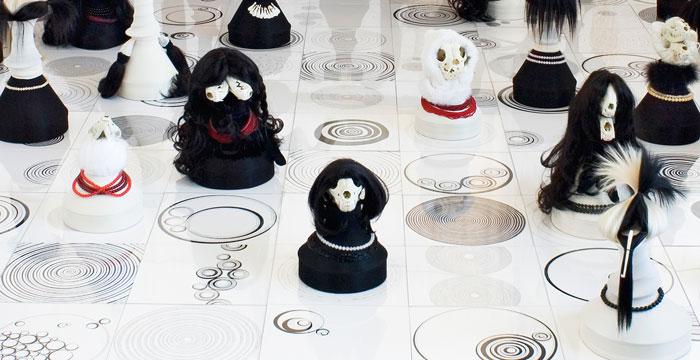 Opening Reception: Friday, October 26, 2012, 6pm to 10pm Exhibition through: January 19, 2013 Extended opening hours on 11/2 until 10pmNina Lola Bachhuber’s sculptures are three- dimensional representations of psychological states in which various levels of abstraction and figuration are oscillating. A strong focus on formal matters, rigorous attention to detail, an affinity to both rationality and fetish culture and the ambivalence of presence and absence are situating the work somewhere between Minimalism and Surrealism.Bachhuber is working equally in drawing and sculpture. Her drawings are never studies for sculptures, but instead are independent works on their own. What connects them to the three- dimensional work is their premise: the body at large, human or animal-like, present or absent, fragmented or whole. Often combined in series, her monochromatic red ink drawings have a certain “dreamlike” feel. While avoiding a linear narrative, they rather seem to tell the story of a fragmented, subjective reality whose truths (or lies), memories, curiosities and desires seem rather uncanny at times.In her recent drawings, the theme of symbioses of two creatures is recurring. This symbioses can be in the form of human nature such as a Siamese twin or a parasite relationship, or can depict creatures part human part animal (often bird), and are at once humorous and disturbing. Each of these idiosyncratic series has her own theme. Spider webs entangle bat-like females; stitched textures grow onto the drawing paper; protagonists are loosing or offering an extra leg; heads turn into multiple hydrocephali, woman into fury or avian creatures (Loplops).Bachhuber’s abstract-geometric drawings are often providing a base or framework for her sculptures. In Untitled (2010), the exhibition’s central piece, the artist is creating an architectural setting which implies a stage or layout of a board game as an unfolding of references that define a fictional scenery, enveloping the viewer in an oversized scaled tableau governed by rules of chance. On top of meticulously drawn geometric circles, which form the individual “fields” of the tableau, the players materialize through an odd combination of supplies such as smoke pipe reducers, tights, coil springs, skulls, teeth, hair, fur and feathers. A rather surrealist environment unfolds in which the individual characters activate the board, insinuating a theater of playful operations and dark intrigues. As such, these sculptures reveal memento mori obsessions and eccentric pastimes. The viewer is taken to a place of shifting scales where mysterious strategies suggest arcane knowledge or tribal rituals.For more information please visit my website: http://weigand.info/en/artists/nina-lola-bachhuber/exhibitions/loplops-logik.htmlNina Lola Bachhuber was born in Munich and studies at the Hochschule für Bildende Künste in Hamburg. She live in Newark, NY, U.S.A. Bachhuber has exhibited her work internationally, e.g. at the UCLA Hammer Museum, The Drawing Center, P.S.1 /MoMA, Sculpture Center, Metro Pictures, Mary Boone and Lehmann Maupin Galleries, Dieu Donné in New York, The Moore Space, Miami, Von der Heydt-Museum, Wuppertal, ZKM Karlsruhe, Museum of Ramat Gan, TelAviv, Gallery Min Min, Tokyo and the 7th Mercosul Biennial in Porto Alegre, Brazil. Her work is in the collection of the Museum of Modern Art, New York.Galerie Heinz-Martin Weigand is a gallery for contemporary art. The focus of the gallery is to show the work of emerging artists from Germany, Europe and the United States.Gallery artists have been included in many important exhibitions in the last five years, such as the Venice Biennale and the Kassel Documenta. The gallery participates at most of the international artfairs (Art Cologne, Art Chicago, Art Brussels, Art Frankfurt...)Numerous publications and monographs are available on all gallery artists.Heinz-Martin Weigand Gallery Charlottenstr. 3 D-10969 Berlin Fon +49.30.25922736 www.galerie-weigand.de Press Contact: Heinz-Martin Weigand

09-18-2012 | Arts & Culture
Galerie Heinz-Martin Weigand
Josef Schulz, poststructure
Josef Schulz: “poststructure” Opening Reception: Friday, September 14, 2012, 7pm Exhibition: through November 3, 2012 Paradise Cafe. Property For Sale poststructure by Josef Schulz Abandoned buildings have a charm of their own. In stark contrast to inhabited ones, life has left them, remaining discernible all the same. In our concept of a life lived it remains present as a memory. Abandoned industrial wastelands, too, exude an air of work and manufacture. These new places
09-24-2010 | Arts & Culture
Galerie Heinz-Martin Weigand
Leta Peer "Room for Simon"
In her exhibition Room for Simon at the Heinz-Martin Weigand Gallery, Leta Peer once more explores her own biography in an artistic manner. Opening reception: September 24, 2010, 7pm. Duration of the exhibition: until November 13, 2010. While Leta Peer, “both in her paintings Along with Simon and in the Mirrors series of photographs achieved a spiritually communicated modern form of an expulsion from paradise”,¹ her exhibition Along with Simon (2007) now
01-29-2010 | Arts & Culture
Galerie Heinz-Martin Weigand
Exhibition Josef Schulz "sign out"
Heinz-Martin Weigand Gallery is pleased to announce an upcoming exhibition of new work by Josef Schulz: sign out. The opening reception will be on Friday, January 29, 2010 (7pm to 10pm). Exhibition from January 30 to March 27, 2010 To start off the year 2010, Galerie Weigand is showing new photographs by Josef Schulz. They can be considered an expansion of the Sachliches series of works, if one goes along with the