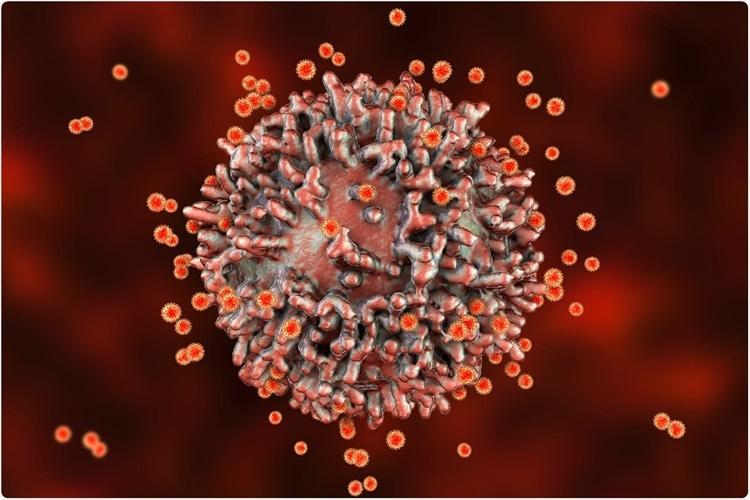 The COVID-19 pandemic has caused more than 600,000 deaths in the United States since the start of 2020 and more than 4 million globally. The search for effective treatments against the disease are ongoing, and one hurdle is that SARS-CoV-2, the virus that causes COVID-19, has a number of tricks up its molecular sleeve when it comes to infecting people.In a recent study published in Nature Communications Biology, researchers from the U.S. Department of Energy's (DOE) Argonne National Laboratory and the University of Chicago identified a way to interfere with a sneaky mechanism the virus uses to prevent a response from an infected person's immune system.This new weapon against COVID-19 actually comes from the fight against cancer, as scientists have found that tipiracil, a drug used to treat colorectal cancer, can inhibit the action of one of the main proteins that make up SARS-CoV-2.SARS-Cov-2 is a ribonucleic acid (RNA) virus. RNA is a type of genetic code that can be translated into proteins that allow the virus to replicate. During its RNA duplication, the virus would typically have a distinct chemical genetic signature -; a string of molecules, or bases, that appends to one end of SARS-CoV-2's RNA backbone.This chemical signature would normally be recognizable by the body and produce an immune response, but the virus has a special way of hiding the extra molecules and sneaking into the body undetected. The research team used the resources of the Advanced Photon Source (APS), a DOE Office of Science User Facility at Argonne, to test a new treatment option that may foil this mechanism.The research was led by Andrzej Joachimiak of Argonne and the University of Chicago, with Argonne protein crystallographer Youngchang Kim and University of Chicago structural biologist Natalia Maltseva and their colleagues. Joachimiak is the director of the Structural Biology Center (SBC) at the APS, and the research team used the high-powered X-ray beams generated there to study one of the virus's proteins, called Nsp15.This protein acts like a molecular scissors, cutting regions of the virus that are involved in its ability to make copies of itself. As more and more of those strings of molecules -; made up of uridine, one of the main components of nucleic acid -; are produced, the Nsp15 molecule removes them, essentially giving the virus the haircut it needs to pass undetected undercover. "Not all the functions of these proteins are fully understood yet, but some of them serve to cut the larger poly-protein into smaller functional units. The RNA gives you the blueprint and encoded proteins act as the scissors," Joachimiak said.The virus uses strings of uridine to duplicate itself and translate those copies into protein. Those strings of uridine would typically create an immune response, but the Nsp15 cuts it off, allowing the virus to proliferate and infection to spread. The tipiracil inhibits the action of Nsp15 by binding in the place where Nsp15 otherwise would.In addition to tipiracil, another drug used for an entirely different malady may have applications in treating COVID-19.Scientists from Yale University have used the APS to study the structure of perampanel, an anti-seizure medication, as a starting point for inhibitor design. Modifying perampanel to create new configurations of the drug gave researchers new molecules that were effective against SARS-CoV-2. These new molecules would be used along with remdesivir, a current therapeutic agent for COVID-19.The Yale researchers, William Jorgensen and Karen Anderson, used a combination of X-rays and computers to target the main SARS-CoV-2 protease, a key enzyme that plays an important role in COVID-19 infection. Perampanel was one of 14 drugs identified from a virtual screening effort to discover potential inhibitors of SARS-CoV-2, from an initial survey of about 2,000 known drugs. The research team found these new analogs of perampanel to be effective against the main protease, especially when combined with remdesivir.The results of their research were published by the American Chemical Society.Huateng Pharma is a dynamic science company dedicated to PEG derivatives and intermediates. We supply kinds of anti-viral intermediates such as remdesivir intermediates which are used for treating COVID-19. We can also supply excipients used in COVID-19 vaccines.Hunan Huateng Pharmaceutical Co. Ltd. Telephone: +86 731 89916275 Fax: +86 0731-82251112-818 Website: https://en.huatengsci.com Email: sales@huatengusa.com Address: Lugu Business Plaza E1, Yuelu District, Changsha City, Hunan Province, P.R. ChinaHuateng Pharma is a leading supplier for a variety of pharmaceutical intermediates used in research and development. We can provide antidiabetic drugs intermediates such as liraglutide intermediates and semaglutide intermediates for your research. We can make scale-up production with capacities varying from gram to kilograms and multi tons.

11-12-2020 | Advertising, Media Consulting, …
Global Market Estimates Research & Consultants
Global RNA Analysis/Transcriptomics Market Report
The Global RNA Analysis / Transcriptomics Market is projected to expand at a CAGR of 12.5% during the forecast period, to hit USD 8.1 Billion by 2026, according to a recent market report compiled by Global Market Estimates. Due to the rising need for personalized medicines, the demand for RNA Analysis / Transcriptomics is expected to raise the market demand. Browse 156 Market Data Tables and 112 Figures spread through 175
06-04-2019 | Advertising, Media Consulting, …
Fact.MR
Cancer RNA Expression Market to Reap Excessive Revenues by 2028(By sequencing te …
Worldwide cancer is one of the leading cause of death and effective way of treating it still looks unaccomplished in most parts of the world. The factors which influence the successful treatment of cancer are different depending on the stage of diagnosis, treatment availability and availability of trained healthcare professionals coupled with high economic burden of the disease. The gene expression of cancerous cells varies by cancer type and may
01-25-2019 | Health & Medicine
SMi Group
Senior experts from Exicure, Roche, GSK, BioNTech RNA Pharmaceuticals & MiNA The …
With less than 4 weeks until SMi’s 10th annual RNA Therapeutics event (http://www.therapeutics-rna.com/openpr) opens its doors in London, UK next month, registration will soon be closing and delegate places are becoming increasingly limited. Over the course of 2 focused days, attendees will be able to have an exclusive look into key developments in oligonucleotide therapeutics, mRNA technology, delivery mechanisms, and much more, led by industry leaders, scientific pioneers, and academics exploring
01-02-2019 | Health & Medicine
SMi Group
RNA Therapy Improves Vision in Child Blindness, hear more about recent developme …
SMi Reports: In light of recent developments in the field of RNA Therapy, SMi’s 10th Annual RNA Therapeutics is set to deliver the latest advancements in February this year. Leber congenital amaurosis (LCA), one of the most common causes of blindness in children, has been the subject of successful RNA therapy as researchers at the University of Pennsylvania recently published new data showing the success of the new therapy which improved
10-26-2017 | Science & Education
SMi Group
New Confirmed Delegates & Speakers for RNA Therapeutics
SMi are thrilled to welcome Dr. James Hamilton, Vice President, Head of Clinical Development, Arrowhead Pharmaceuticals onto the speaker panel RNA Therapeutics 2018! Dr. James Hamilton is currently responsible for all aspects of clinical trial design, implementation and execution. In this role, Dr. Hamilton managed the ARC-520 and ARC-AAT global programs through Phase 2 of development. Previously, Dr. Hamilton was Medical Director and Head of Corporate Development at Arrowhead. He led
10-10-2017 | Science & Education
SMi Group
Introducing the 9th Annual RNA Therapeutics 2018
As the requirement for targeted solutions for chronic diseases continues to grow, the interest of pharmaceutical and biotech companies has increasingly focused towards RNA therapeutics, such that by 2020, the RNA Therapeutics Market is predicted to attain $1.2 billion. One of the main challenges in RNA Therapeutics continues to be bridging the gap between in-vivo and in-vitro models, hear key case studies on the development on the latest delivery systems and
Comments about openPR
Your portal is fast, simple, and easy to use. Others may have more functions but they also demand more editing time, you have to preformat the text in order to achieve a good result etc. I think openPR is really fantastic!
Andreas Knepper, wallmedien AG