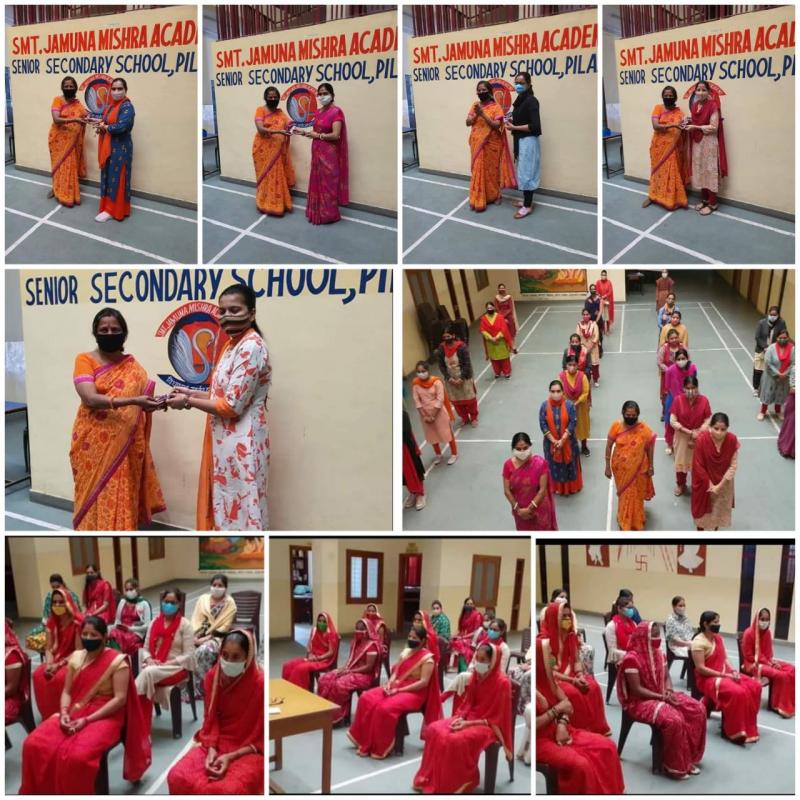 Smt. Jamuna Mishra Academy JMA established in the year 2004 is presently one of the most sought after schools at Pilani considered as Oasis in the desert state of Rajasthan. It is a matter of great pride that alumni of JMA are presently pursuing higher education in various institutions which include NAAC A++ and UGC Category-I, Banasthali Vidyapith which in Times Higher Education 'THE' is Second Best Women's University in global rankings as well as Institution of Eminence BITS Pilani.JMA Pilani has established a rich tradition of observing various days and festivals of international as well as national importance on a regular basis. Due to COVID-19, with schools closed keeping the children engaged academically and culturally has become a serious challenge for many educational institutions in India today with a few exceptions such as JMA Pilani. International Women's Day (March 8) is a global day celebrating the social, economic, cultural, and political achievements of women.In 1848 indignant over women being barred from speaking at an anti-slavery convention, Americans Elizabeth Cady Stanton and Lucretia Mott brought a few hundred people at their nation’s first women’s rights convention in New York to demand civil, social, political and religious rights for women in a Declaration of Sentiments and Resolutions and thus the movement was born. The first National Woman's Day was observed in the United States on 28 February. The Socialist Party of America designated this day in honour of the 1908 garment workers' strike in New York, where women protested against working conditions.19 March, the last Sunday of February, 15 April, and 23 February are among the key dates for the International Women’s Day movement over various years. Before the Great Revolution, Russia had not yet adopted the Gregorian calendar which is used today in the large majority of countries. In 1917, 23 February in Russia thus corresponded to 8 March in the other European countries and thus came the celebrations worldwide on 08 March every year. This year’s theme for the International Day "Women in leadership: Achieving an equal future in a COVID-19 world", celebrates the tremendous efforts by women and girls around the world in shaping a more equal future and recovery from the COVID-19 pandemic. The UN Secretary General Antonio Guterres inspiring message for the day is “Whether running a country, a business or a popular movement, women are making contributions that are delivering for all and driving progress towards the Sustainable Development Goals."Principal Mrs Booma Natarajan addressing the teachers and school women workers pointed out that women across the world had been standing at the front lines of the COVID-19 crisis, as health care workers, caregivers, innovators, community organizers and as some of the most exemplary and effective national leaders in combating the pandemic. The crisis indeed had highlighted both the centrality of their contributions and the disproportionate burdens that women carry. Lauding each and every worker for ensuring the sanitization of each and every class room, laboratory, computer centre, library and other facilities, Principal Mrs Booma Natarajan felicitated each one of them. Coordinators Ms Aarti Kashiramka, s Laxmi Jangid and Ms Anand Shekhawat were appreciated for their leadership role and for facing all challenges with a smile. Special appreciation also went to Ms Sushma Sharma and Ms Suman Gaur for their strong support to the institution in facing the pandemic challenge. For more details about JMA Pilani see http://www.jmapilani.org/Default.aspxMrs Booma Natarajan, M.Sc., M.A., B.Ed. Principal, Jamuna Mishra Academy – JMA Near Old Pilani Post Office Pilani Rajasthan 333031 India Phone 91-1596-242314 Email booma_pilani at yahoo.co.in Website: http://www.jmapilani.org/Default.aspx FaceBook: https://www.facebook.com/JMAPilaniRajasthanRank1/About JMA Pilani: Jamuna Mishra Academy - JMA Pilani is a Co-educational English Medium School with Experienced Teachers, Spacious Classrooms and Modern Amenities designed to impart Quality Education combined with All Round Personality Development and lay the Best Foundation for the Child’s Future. While the school admits both boys and girls, the girl student enrollment has been steadily rising every year and is presently nearly 50% of the total strength. Right from its inception, JMA Pilani has embarked on a rich tradition of celebrating various days of national and international significance and festivals which makes it a cut above the rest schools in Pilani. The school has for boys and girls Scout and NCC, girls’ band which has been winning laurels every year. NCC cadets of JMA Pilani have also been selected for participation in Republic Day Camp RDC and Shivaji Trail Trek. Yoga, Karate, Painting and Music are not just part of school routine but a way of life for the students. It is a matter of great pride that JMA Pilani is referred popularly as the School with 100% Results on account of outstanding results year after year in Board of Secondary Education Rajasthan RBSE Class X and Class 12.

12-07-2018 | Health & Medicine
Spring Forest Qigong
7 Day Blessing 2019
7 Day Blessing 2019 A Free On-Line Healing Chanting Meditation Event Sunday January 6th through Saturday January 12th A new year is a time for rebirth, renewal, rejuvenation, replenishment, and rejoice. There is no better way to embrace this rekindling of the spirit than communal meditation. Join us January 6 – 12 as we follow the lead of Master Chunyi Lin and three Tibetan Monks in a collective gathering of enlightening meditation. This 7
11-05-2018 | Logistics & Transport
Silver Service Taxi Melbourne
Melbourne Cup Day
The Melbourne Cup is annually held on the first Tuesday in 6th November with the day being a half day public holiday in Victoria and a full day holiday in Melbourne. In This event Silver Service Taxi Melbourne providing a taxi service in very affordable prices because in this event finding a taxi is very difficult and if you are lucky to get one it will cost you a fortune
03-16-2017 | IT, New Media & Software
Algoworks
Women’s Day Celebrations 2017
On the occasion of International Women’s Day, Algoworks celebrated this special time with joy and delight by expressing gratitude towards the women of their workplace, and made them feel special and loved. The entire day was dedicated to all the women employees of Algoworks and their valuable presence in the team was celebrated with glee. The entire premises were adorned with balloons and flowers. Women employees were dressed up in
09-23-2016 | Health & Medicine
PRO RETINA Deutschland e.V.
World Retina Day 2016
On World Retina Day, Saturday September 24th 2016, Retina International urges the Global Retina Community to advocate for access to Genotyping services that will expedite the development of therapies for unmet need. Retinal Diseases are among the most common causes of vision loss in the global working population. The impact of these conditions on quality of life, be they rare and inherited or age-related, is immense. However there is
10-17-2014 | Health & Medicine
Relaxa UK
National Stress Awareness Day
National Stress Awareness Day is on Wednesday 5th November 2014. Relaxa is offering employee stress & wellbeing health promotion packages starting at £255 on or around this date - incorporating a range of stress & wellbeing activities for your staff. There are 9 cost-effective stress and wellbeing promotion packages available below: 1) Stress Health Promotion Package 1 - £255.00+vat 2) Stress Health Promotion Package 2 - £399.00+vat 3) Stress Health Promotion Package 3
10-13-2011 | Leisure, Entertainment, Miscel …
Blue on Highland
Boss Appreciation Day
WHAT: In celebration of National Boss Day, Blue on Highland located in Needham, MA, is honoring all bosses, by offering guests a free appetizer when they dine with their boss during lunch on Monday, October 17th, 2011. Celebrated annually on October 16th, National Boss Day was founded in 1958 when Patricia Bays Haroski, an employee at State Farm Insurance Company in Deerfield, Illinois, designated it a day to show appreciation
Comments about openPR
We publish our press releases on openPR.de because we like people who are "open" - just like us.
Frank Obels, CEO, INCONET - Informationssysteme, Communication und Netzwerkberatung GmbH