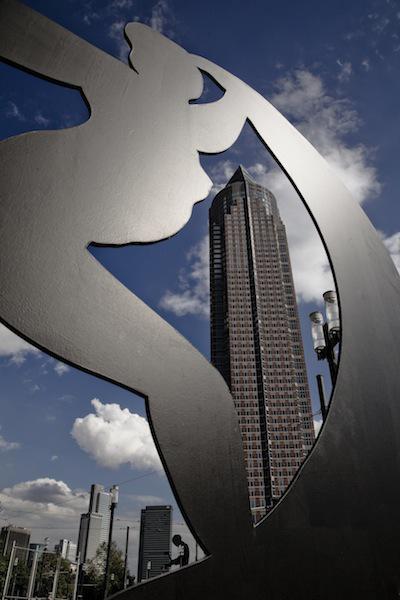 A major exhibition of Stefan Szczesny’s artworks will open on June 28, 2012, in Frankfurt’s Palmengarten. The exhibition will feature about 70 sculptures, in particular the artist’s black-steel “shadow sculptures”, but also paintings and ceramics. The exhibition’s epicentre is the Palmengarten, but artworks will be on display in other locations as well. Born in Munich in 1951, Stefan Szczesny is among the protagonists of the ‘Junge Wilde’ movement which emerged in the late 70s in reaction to minimal and other non-figurative art. The goal of this movement was to break free from the ‘less is more’ dictates of the time and to breathe fresh life into the subject-matters of figurative art. In his unmistakable style – light, spirited and always positive – Szczesny falls back upon the traditions of classical modernity. He feels connected in particular to Picasso and Matisse. The exhibition project in Frankfurt focuses on the theme of “art and nature”. Nature is a ubiquitous reference point of Szczesny’s work, hinting at the artist’s vision of an earthly paradise. The works on display are representative. For instance, the steel-sculptures depict voluptuous female figures, lush vegetation and opulent maritime life; works on canvas show jungle scenes; works on paper include paintings on botanical etchings. About half of the sculptures as well as the paintings and ceramics will be on display in the Palmengarten. The remaining sculptures are set up in various places around the city, including the “Squaire” at Frankfurt Airport. Further works will be shown at the art gallery “Frankfurter Kunstkabinett Hanna Bekker vom Rath”. The paintings and ceramics in the Palmengarten will be on display until mid-August, the sculptures, including those in the Palmengarten, until mid-October.The exhibition project is supported by Jaguar Germany.Stefan Szczesny, born in 1951 in Munich, became famous as one of the protagonists of the "Junge Wilde" movement in the 80s. He lives and works in Berlin and Saint-Tropez.Exposition Stefan Szczesny Espace des Lices 7, Boulevard Louis Blanc 83990 Saint-Tropez France

You can edit or delete your press release Stefan Szczesny: Major exhibition in Frankfurt am Main, Summer 2012 here

11-21-2014 | Arts & Culture
Szczesny Factory
CU1 Gallery presents Stefan Szczesny
Miami, FL - On the occasion of Art Basel Miami Beach CU1 Gallery presents an exceptional exhibition of the internationally renowned artist Stefan Szczesny. The exhibition will be on display from December 1-7 at CU1 Gallery's exhibition space in downtown Miami. A former protagonist of the bold figurative painters of the “Neue Wilde” (Nouveaux Fauves), Szczesny is widely known for his exuberant and sensual style celebrating the beauty of life.
09-13-2012 | Arts & Culture
Szczesny Factory
Szczesny exhibition in New York: “Neue Wilden works from the 80s”
From September 12 to October 8, 2012, 532 Gallery Thomas Jaeckel presents a selection of early 80s works by the internationally acclaimed artist Stefan Szczesny, in the framework of an exhibition entitled “Szczesny: Neue Wilden works from the 80s.” The exhibition is curated by the renowned art critic Donald Kuspit. Stefan Szczesny was born in Munich in 1951. He became famous as one of the protagonists of the so-called
02-15-2012 | Arts & Culture
Szczesny Factory
Current exhibition: ‘Shadows in the park’ in Bergisch-Gladbach, Germany
The parkways of Grandhotel Schloss Bensberg and Schlosshotel Lerbach in Bergisch-Gladbach near Cologne currently host an exhibition featuring a number of the so-called ‘shadow sculptures’ by the German artist Stefan Szczesny. The exhibition is part of a series of installations of these sculptures under the general title ‘Shadows in…’. Previous venues were St. Moritz, Sylt and Saint-Tropez. Born in Munich in 1951, Stefan Szczesny is among the protagonists of the