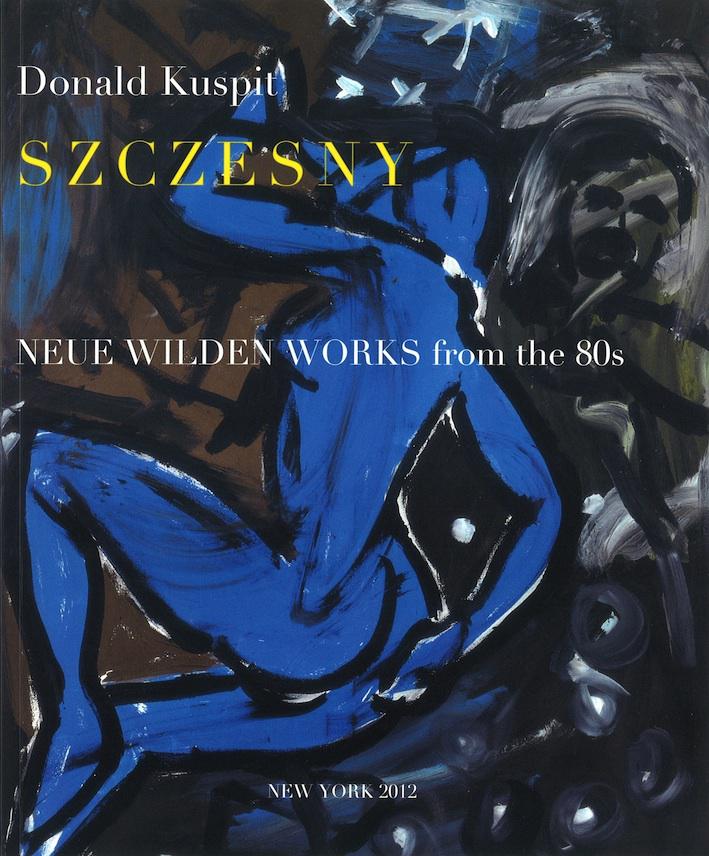 From September 12 to October 8, 2012, 532 Gallery Thomas Jaeckel presents a selection of early 80s works by the internationally acclaimed artist Stefan Szczesny, in the framework of an exhibition entitled “Szczesny: Neue Wilden works from the 80s.” The exhibition is curated by the renowned art critic Donald Kuspit. Stefan Szczesny was born in Munich in 1951. He became famous as one of the protagonists of the so-called “Neue Wilde.” These were young German-speaking painters who came to fame in the early 80s and were united by their desire to return to figurative art at a time when minimalist and concept art prevailed. Szczesny was a central figure of the “Neue Wilde” as an artist but also as the organiser of the group’s arguably most important exhibition (the “Rundschau Deutschland”) and as editor of the journal “Malerei. Peinture. Painting,” which provided an important platform for figurative painters across the world. Szczesny is currently among the most important contemporary artists. He lives and works in Saint-Tropez.The exhibition at 532 Gallery Thomas Jaeckel shows a representative selection of works from Szczesny’s “Neue Wilden” years. The emphasis is on works on canvas, but works on paper and ceramics are also on display. The exhibition is curated by Donald Kuspit, formerly A. D White Professor at Large at Cornell University. Kuspit had worked on Szczesny in the past, publishing, in 1995, a monograph on the artist. On the occasion of the exhibition, a catalogue has been published, which contains an original essay by Donald Kuspit as well as an extensive documents-section.Venue: 532 Gallery Thomas Jaeckel 532 West 25th Street New York, NY 10001Stefan Szczesny, born 1951 in Munich, became famous as one of the protagonists of the Neue Wilde. He lives and works in Saint-Tropez.Atelier Stefan Szczesny Espace des Lices 7, Bd. Louis Blanc 83990 Saint-Tropez

You can edit or delete your press release Szczesny exhibition in New York: “Neue Wilden works from the 80s” here

11-21-2014 | Arts & Culture
Szczesny Factory
CU1 Gallery presents Stefan Szczesny
Miami, FL - On the occasion of Art Basel Miami Beach CU1 Gallery presents an exceptional exhibition of the internationally renowned artist Stefan Szczesny. The exhibition will be on display from December 1-7 at CU1 Gallery's exhibition space in downtown Miami. A former protagonist of the bold figurative painters of the “Neue Wilde” (Nouveaux Fauves), Szczesny is widely known for his exuberant and sensual style celebrating the beauty of life.
05-24-2012 | Arts & Culture
Szczesny Factory
Stefan Szczesny: Major exhibition in Frankfurt am Main, Summer 2012
A major exhibition of Stefan Szczesny’s artworks will open on June 28, 2012, in Frankfurt’s Palmengarten. The exhibition will feature about 70 sculptures, in particular the artist’s black-steel “shadow sculptures”, but also paintings and ceramics. The exhibition’s epicentre is the Palmengarten, but artworks will be on display in other locations as well. Born in Munich in 1951, Stefan Szczesny is among the protagonists of the ‘Junge Wilde’ movement which emerged
02-15-2012 | Arts & Culture
Szczesny Factory
Current exhibition: ‘Shadows in the park’ in Bergisch-Gladbach, Germany
The parkways of Grandhotel Schloss Bensberg and Schlosshotel Lerbach in Bergisch-Gladbach near Cologne currently host an exhibition featuring a number of the so-called ‘shadow sculptures’ by the German artist Stefan Szczesny. The exhibition is part of a series of installations of these sculptures under the general title ‘Shadows in…’. Previous venues were St. Moritz, Sylt and Saint-Tropez. Born in Munich in 1951, Stefan Szczesny is among the protagonists of the