Counting down to Cleanzone in Frankfurt 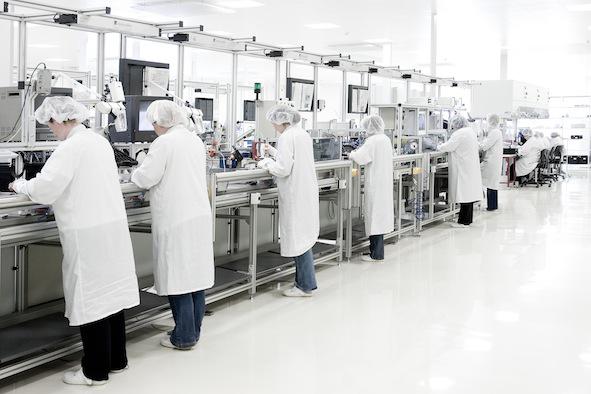 In just a few days, Cleanzone, the international trade fair for cleanroom technology, will be opening its doors in Frankfurt for the first time, presenting some 40 market leaders with their products and services in Hall 4.0 on 24 and 25 October. There will be a great deal of hands-on expertise and industry highlights on offer for cleanroom users, not to mention a wealth of scientific know-how provided by prominent experts at the Cleanzone Congress taking place at the same time. The industry is on the move The new Cleanzone event is making its mark, with a number of international firms joining the ranks of exhibitors shortly before the registration deadline. New arrivals include Particle Measuring Systems, Viessmann, Weiss GWE and Weiss Klimatechnik, as well as national pavilions for both Austria and Switzerland. Some of the other major names who will be in attendance are BSR, CAS Clean-Air-Service, Colandis, Daldrop, Decontam, Dycem, Hydroflex, Kimberly-Clark, PPS Pfennig, Technology of Sense and WISAG. “We are very pleased with the response to the first Cleanzone, particularly in light of the limited time available in which to market this event. Numerous leading companies in the cleanroom sector will be on hand for the debut event, creating a solid foundation for future growth,” states Klaus Reinke, Member of the Extended Board of Management of Messe Frankfurt Exhibition GmbH.Cleanzone Plaza delivers practical know-how One of the highlights of the trade fair will be Cleanzone Plaza in Hall 4.0, where visitors will be able to enjoy a continuous series of presentations offering practical information and valuable tips and tricks pertaining to cleanroom utilisation and expertise – and it is all free of charge. Starting at 10:00 a.m. each day, the “Life Science” and “Microtechnology” forums will alternate at 30-minute intervals, covering a wide range of topics such as particle measurement, cleanroom cleaning, optimising cleanroom clothing, security and surface cleanliness. This will also be the venue where the nominees for the Cleanroom Awards present their projects on 24 October. Cleanroom Award With a firm focus on innovations, the Cleanroom Award will be presented for the first time at Cleanzone 2012. This prize, which is given by Reinraum-Akademie GmbH (Leipzig), honours projects in the cleanroom industry that are distinguished by their exemplary innovation, sustainability and efficiency. The five nominees are Palas for “Reference Aerosol Distribution System”, AAF-Lufttechnik for “VITCAcel”, Technology of Sense for “APMON”, Colandis for “Art in the Cleanroom”, and Graz University of Technology for its master’s degree programme in cleanroom technology. Starting at 12:00 noon on 24 October 2012, participants will be presenting their innovations at the Cleanzone Plaza area. The winner will be chosen on the basis of votes cast by Cleanzone visitors in the special exhibition featuring all five projects. The awards ceremony will take place on the Cleanzone Plaza stage at 12:30 p.m. on 25 October 2012. Cleanzone Congress The Cleanzone Congress will be held alongside the Cleanzone trade fair. This new knowledge platform for cleanroom technology is aimed at manufacturers and users from across the industrial spectrum, offering independent scientific knowledge from a range of international experts. The four sessions, “Concepts and Trends”, “Planning and Construction”, “Qualification and Monitoring” and “Cleanroom Operation”, cover the gamut from future requirements and challenges, international guidelines and regulations to staff training and increasing cleanroom efficiency. The keynote speaker on the first day of the congress is Prof. Dr. Walter. In his presentation entitled “Clean Room, Clean Space – Cleanroom Technology in Space Missions”, the astronaut will be discussing “marriage” in a cleanroom and the vital importance of cleanliness in space flight. Presentations will also be given by Koos Agricola (ICCCS International Confederation of Contamination Control Societies), Dr. Udo Gommel (Fraunhofer IPA), Conor Murray (3dimension Cleanroom and Chairman of the Irish Cleanroom Society), Joachim Ludwig (Colandis), Gabriele Schmeer-Lioe (Denkendorf Institute of Textile and Process Engineering) and Florian Dittel (Dittel Engineering), as well as other renowned experts.Get-together On the evening of the first day of the event, 24 October, there will be a get-together for the cleanroom community starting at 6:00 p.m. to which all visitors, exhibitors and speakers are invited – an excellent opportunity to expand networks and engage in more detailed discussions. Music, food and drink will be provided to ensure a relaxed atmosphere. Registration for the trade fair is free until 20 October Those who act fast and submit their registrations for the Cleanzone trade fair by 20 October 2012 will be able to do so at no charge. Starting on 21 October and at the ticket office during the event, tickets will cost 25 euros.A one-day ticket to the Cleanzone Congress costs 450 euros, while a ticket for both days costs 600 euros. Each ticket includes food and drink, the evening event and admission to the trade fair. The trade fair and congress will be taking place in Hall 4.0 from 9:00 a.m. to 6:00 p.m. on 24 October, and from 9:00 a.m. to 5:00 p.m. on 25 October. Parking is available on parking level 4, which offers direct access to Hall 4.0.To register and find out more about Cleanzone 2012: www.cleanzone.messefrankfurt.comBackground information on Messe Frankfurt Messe Frankfurt is Germany’s leading trade fair organiser, with 467.5 million euros in sales and 1,725 employees worldwide. The Messe Frankfurt Group has a global network of 28 subsidiaries and approx. 50 international Sales Partners, giving it a presence for its customers in more than 150 countries. Events “made by Messe Frankfurt” take place at more than 30 locations around the globe. In 2011, Messe Frankfurt organised 100 trade fairs, of which more than half took place outside Germany. Messe Frankfurt’s exhibition grounds, featuring 578,000 square metres, are currently home to ten exhibition halls and an adjacent Congress Center. The company is publicly owned, with the City of Frankfurt holding 60 percent and the State of Hesse 40 percent. For more information, please visit our website at: www.messefrankfurt.comKerstin Männer Presse . Text . Konzept namens und im Auftrag der Messe Frankfurt Exhibition GmbH Ludwig-Erhard-Anlage 1 60327 Frankfurt am Main Telefon +49 221 16 99 59 30 kerstin.maenner@messefrankfurt.com www.messefrankfurt.com

04-05-2019 | Fashion, Lifestyle, Trends
Newspatrolling
Ways to clean accessories
jewellery Many of the accessories are coated with rust and color change, which makes many ladies wonder how to clean the painted accessories and restore the luster and shine again and get rid of rust and discoloration, always the main reason for changing the color of accessories coated is oxidation by many factors that may be Ms. Sweating, salts, water, etc., follow this article to learn about ways to clean painted
03-14-2019 | IT, New Media & Software
TMR Research
Clean Fuel Technology Market - Revolutionary Trends 2025 | Clean Fuel USA, Clean …
Global Clean Fuel Technology Market: Overview Clean technology in general implies the use of any service, product, or system that has as little of a negative impact on the environment as possible. Aspects of clean technology include the conservation of energy, sustainable resources, and clean sources of fuels. Clean fuels can refer to the use of renewable fuels such as biogas, or also blended fuels such as fossil fuels with renewable
02-01-2018 | Industry, Real Estate & Constr …
marketstudyreport.com
Global Clean Coal Technology Market
Market Study Report Add New Global Clean Coal Technology Market by Manufacturers, Countries, Type and Application, forecast to 2023 to its research database presenting a deep study of the market growth factors and drivers. The report spread across 109 pages with table and figures in it. This report studies the Clean Coal Technology market. Clean coal technology is a collection of technologies being developed to attempt to help lessen the environmental
04-28-2017 | Fashion, Lifestyle, Trends
Markilux
Clean, comfortable cassette shading
The markilux 3300 pur cassette awning is a sleek, strong and stylish solution. Being produced for over 30 years, the markilux 3000 pur has always remained one of markilux’s most timeless and popular models. In this time, it has maintained its quintessential features, and also inherited some exciting new improvements along the way. Its minimalistic design paired with faultless functionality makes it a clear choice for those looking for a stylish
11-21-2016 | Business, Economy, Finances, B …
Allen Maintenance Inc.
Helping Local Businesses Stay Clean
Eastern District Michigan businesses require professional cleaning services. The very reason why- Allen Maintenance Corporation, is interested in building business alliances, with local businesses. After all, one of the main concerns during the winter months, is the spread of cold viruses and Influenza germs, throughout the State of Michigan. In fact, each week, the Michigan Department of Community Health, reports on the number of people contracting the flu. And during both
03-25-2011 | Health & Medicine
ulrich medical
Refreshingly easy to clean - ulrich clean wave rongeurs
At the long-established company of ulrich medical in Ulm, Germany, “clean wave” lives up to its name. The rongeurs feature a new shaft design which facilitates processing considerably. The sophisticated waveform of the shaft allows the instrument to be cleaned without disassembly. Therefore, it can be easily processed, but at the same time safely and efficiently. This not only saves time but also ensures long-term full functionality and long instrument life. The surface
Comments about openPR
I can't but agree to the positive statements about your portal: easy to use, clear layout, very good search function, and quick editing!
Jens O'Brien, Borgmeier Media Communication