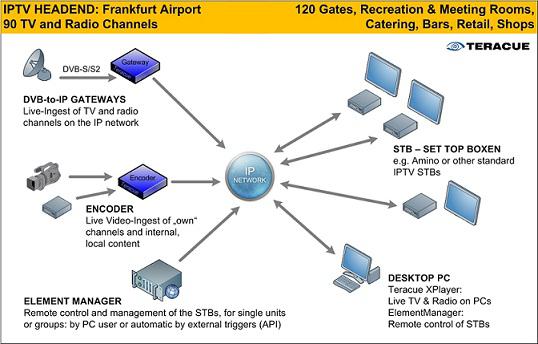 At Frankfurt Airport, dreams of the future already come as standard: television and radio programmes are distributed all over the airport grounds site using IPTV. The existing network infrastructure is used as a basis here. The operating company, Fraport AG uses the IPTV hardware and software of manufacturer Teracue for its distribution.More than 90 television and radio channels are distributed over the IPTV network at Frankfurt Airport today. Amongst others, this includes the television programmes of public and private television networks, various pay TV channels and about 20 radio stations. The fields of use of the system are just as extensive as the diversity of stations available. For example, Fraport does not just use IPTV for its own purposes, such as for meeting rooms and lounges or on more than 200 displays on 120 gates. There is also opportunity for catering establishments, bars and retail businesses at the airport to use the IPTV system to show programmes on their own terminals. Furthermore, to date, more than 400 set-top boxes have been connected, which are provided with IPTV channels at Frankfurt Airport. The streaming of television and radio programmes is provided with the help of the DVB-to-IP gateways by Teracue. Signals, such as DVB-S/S2 and DVB-ASI are streamed via IP using a multicast process with the hardware plug-in cards designed for robust 24/7 operation. “With our solution, there are DVB satellite signals, which we feed into the network in real-time as IPTV streams, sometimes in HD and sometimes in SD,” says Klaus Schultz-Fademrecht, manager of the networks department at Fraport AG. “Back in 2008, we started to convert the television and radio distribution at Fraport into an IPTV solution. As well as the enormous cost advantage, the low maintenance requirements and high degree of scalability were decisive reasons for setting up an IPTV system.”In addition, the installed IPTV system is flexible enough to grow with its requirements. For example, in the early stages, set-up was only provided for SD distribution. The upgrade to HD only required replacement of the set-top boxes. Schultz-Fademrecht says, “We are discovering new fields of application, for which IPTV can be used. We are currently integrating a centrally controlled mute switch, which can be automatically sent to all connected set-top boxes in emergencies, for example when there is a fire alarm. No laborious expansions to the IPTV network were needed, even to set up this function. Only the Teracue management software ElementManager, which gives remote access to each individual set-top box needs to be upgraded to enable this global mute function. The examples of Fraport and Frankfurt Airport show how a cleverly used IPTV system can not only contribute to a varied offering of infotainment, but also to the safety of passengers.About Teracue AG Teracue AG - Broadcast & IPTV Systems was established in 1991 and manufactures video processing solutions for IPTV, video-networking and streaming. Teracue provides encoder, decoder, transcoder, stream-viewing/recording, as well as DVBTV gateway and IPTV headend products: used mainly in broadcast and contribution networks, inside playout facilities, for healthcare and medical applications, for corporate and digital business TV, in universities and schools for education and training, inside fire/police centres, control rooms, aerospace companies, military and federal organisations for archiving, monitoring and debriefing. Teracue IPTV products enable professional system integrators to build robust, comprehensive end-to-end IP video systems. More information is available at www.teracue.com.Press Contact: Rainer Link, Marketing Manager Teracue AG - Broadcast & IPTV Systems Schlossstr. 18 85235 Odelzhausen GermanyTel: +49 (0)8134 555 150 Email: rainer.link@teracue.com Website: www.teracue.com Twitter: www.twitter.com/teracue