A New Antiviral Strategy Was Discovered For Treating COVID-19 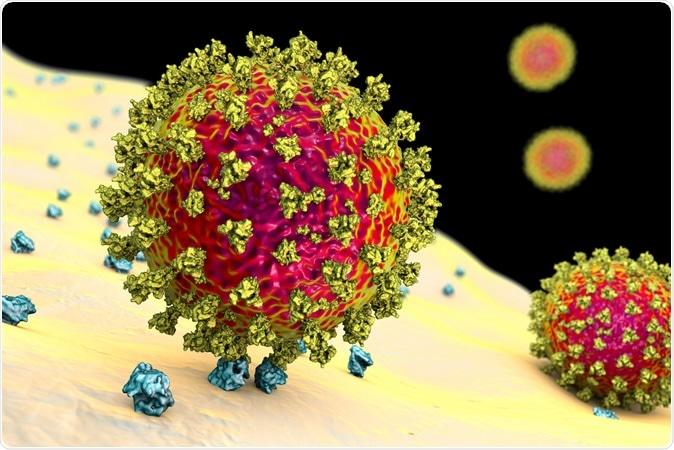 A research team led by Professor Hongzhe SUN, Norman & Cecilia Yip Professor in Bioinorganic Chemistry, Department of Chemistry, Faculty of Science, and Professor Kwok Yung YUEN, Henry Fok Professor in Infectious Diseases, Department of Microbiology, Li Ka Shing Faculty of Medicine of the University of Hong Kong (HKU), has discovered a novel antiviral strategy for treatment of COVID-19.They discovered that a class of metallodrugs currently used in the treatment of other infectious diseases is showing efficacy to potently suppress SARS-CoV-2 replication and relieve viral-associated symptoms in an animal model. The findings provide a new and readily available therapeutic option with high clinical potential for infection with SARS-CoV-2. SARS-CoV-2 is an emerging coronavirus that has caused over 30 million laboratory-confirmed cases and more than 1 million deaths globally of COVID-19 since December 2019.As the process of developing an effective vaccine is still ongoing, another approach for prevention and treatment of the disease is to identify anti-COVID-19 agents from existing virus-specific antiviral drugs to repurpose their uses to target the new virus.Clinical trials on a series of antiviral agents are still ongoing which have yet to demonstrate therapeutic efficacies. Therefore, greater efforts are needed to extend the evaluation to cover a wider spectrum of clinically approved drugs, which hopefully could open the way to alternative treatment strategies against the disease through some readily available channels.Generally, metal compounds are used as anti-microbial agents; their antiviral activities have rarely been explored. After screening a series of metallodrugs and related compounds, the research team identified ranitidine bismuth citrate (RBC), a commonly used anti-ulcer drug which contains the metal Bismuth for treatment of Helicobacter pylori-associated infection, as a potent anti-SARS-CoV-2 agent, both in vitro and in vivo.RBC targets the vital non-structural protein 13 (Nsp13), a viral helicase essential for SARS-CoV-2 to replicate, by displacing the crucial zinc(II) ions in the zinc-binding with Bismuth-ions, to potently suppress the activity of the helicase.RBC has been demonstrated to greatly reduce viral loads by over 1,000-folds in SARS-CoV-2-infected cells. In particular, in a golden Syrian hamster model, RBC suppresses SARS-CoV-2 replications to reduce viral loads by ~100 folds in both the upper and lower respiratory tracts, and mitigates virus-associated pneumonia.RBC remarkably diminishes the level of prognostic markers and other major pro-inflammatory cytokines and chemokines in severe COVID-19 cases of infected hamsters, compared to the Remdesivir-treated group and control group.RBC exhibits a low cytotoxicity with a high selectivity index at 975 (the larger the number the safer the drug), as compared to Remdesivir which has a low selectivity index at 129. The finding indicates a wide window between the drug's cytotoxicity and antiviral activity, which allows a great flexibility in adjusting its dosages for treatment.The team investigated the mechanisms of RBC on SARS-CoV-2 and revealed for the first time the vital Nsp13 helicase as a druggable target by RBC. It irreversibly kicks out the crucial zinc(II) ions in the zinc-binding domain to change it to bismuth-bound via a distinct metal displacement route.The research findings highlight viral helicases as a druggable target, and the high clinical potential of bismuth(III) drugs and other metallodrugs for treatment of SARS-CoV-2 infections.Huateng Pharma is a leading manufacturer of API's Intermediates, such as anti-viral intermediates. They are oseltamivir intermediates, remdesivir intermediates, favipiravir impurities and baloxavir marboxil intermediates, etc. We are able to provide the services of Anti-Viral intermediates' process development and scale-up production with capacities varying from gram to kilograms and multi tons.Hunan Huateng Pharmaceutical Co. Ltd. Lugu Business Plaza E1, Yuelu District, Changsha City, Hunan Province, P.R. China zip code: 410205 Telephone: +86 731 89916275 Fax: +86 0731-82251112-818 Website: https://en.huatengsci.com Email:sales@huatengusa.comHuman Huateng Pharmaceutical Co., Ltd. is a leading and professional manufacturer which can provide PEG derivatives, biochemical reagents, pharmaceutical intermediates, APIs, Vitamin D Derivatives and targeted anti-tumor drugs.