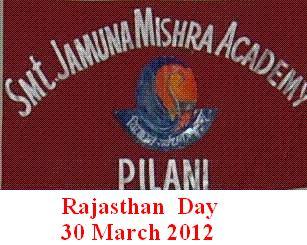 JMA Pilani which aims to be one among the top ranking schools in India today derives its strength from the quote “Information is just bits of data while knowledge is putting them together and wisdom is transcending them.”Rajasthan which is indeed a destination that defines definition is the largest state of the Republic of India today in terms of area and it will not be an exaggeration if it is said that no other region in the country is a conglomeration of so many paradoxes. The present state of Rajasthan with 33 districts was formed on 30th March 1949 when the erstwhile princely states merged into the Union of India. Hometown to the Birla family, Pilani in the heart of Shekhawati region of Rajasthan is well known for various educational institutions, CSIR Laboratory CEERI as well as the upcoming BrahMos Missile Assembly Project unit. Established in the year, 2004 Smt Jamuna Mishra Academy – JMA which has been making rapid strides in early childhood education is presently one among the most sought after schools at Pilani. JMA which started with an enrollment of 60 students for the Nursery, LKG, First Junior and Class1 has grown today till Class 9 with well over 500 students presently. Over the years, the founding Principal of JMA, Mrs Booma Natarajan has ensured that the school follows the rich tradition of observing various days of national and international importance on a regular basis to increase the current awareness among the enrolled children. On 30 March 2012, JMA observed the 63rd Rajasthan Diwas with the Principal Mrs Booma Natarajan giving an overview of the importance of the day touching on the history, profile, art & culture as well as tourism potential of the state and urged the children to take pride in being a part of such a colourful state. For more details about JMA Pilani see http://www.jma-pilani.page.tl/About JMA Pilani: Smt Jamuna Mishra Academy - JMA Pilani is a Co-educational English Medium School with Experienced Teachers, Spacious Classrooms and Modern Amenities Designed to impart Quality Education combined with All Round Personality Development and lay the Best Foundation for the Child's Future. For more details about JMA Pilani see http://www.jma-pilani.page.tl/Mrs Booma Natarajan, M.Sc., M.A., B.Ed. Principal, Jamuna Mishra Academy – JMA Near Old Pilani Post Office Pilani Rajasthan 333031 India Phone 91-1596-242314 Email booma_pilani@yahoo.co.in Website: http://www.jma-pilani.page.tl/

12-07-2018 | Health & Medicine
Spring Forest Qigong
7 Day Blessing 2019
7 Day Blessing 2019 A Free On-Line Healing Chanting Meditation Event Sunday January 6th through Saturday January 12th A new year is a time for rebirth, renewal, rejuvenation, replenishment, and rejoice. There is no better way to embrace this rekindling of the spirit than communal meditation. Join us January 6 – 12 as we follow the lead of Master Chunyi Lin and three Tibetan Monks in a collective gathering of enlightening meditation. This 7
11-20-2018 | Energy & Environment
Garware Technical Fibres
World Fisheries Day 2018
The fishing and aquaculture industry is key to meet the worldwide protein needs of an ever increasing population. Every innovation that helps a net catch only the required fish, every durable net that does not breakdown easily, and every bit of research that helps save fuel - contributes to a better world of fisheries. We at Garware Technical Fibres are committed to enhancing value of our fisheries customers through better ideas in action. World Fisheries
11-05-2018 | Logistics & Transport
Silver Service Taxi Melbourne
Melbourne Cup Day
The Melbourne Cup is annually held on the first Tuesday in 6th November with the day being a half day public holiday in Victoria and a full day holiday in Melbourne. In This event Silver Service Taxi Melbourne providing a taxi service in very affordable prices because in this event finding a taxi is very difficult and if you are lucky to get one it will cost you a fortune
06-13-2018 | Arts & Culture
SCFI Festivals Network
Father’s Day Messages
New Delhi, 12th June 2018 A father is someone who holds his children and makes all their dreams come true even if he needs to sacrifice his own dreams. Father’s day is a reminder of all those sacrifices that shapes life of many bringing out the best out of the person. The day is celebrated to bring into notice the strength in being a father and how the presence of a
10-17-2014 | Health & Medicine
Relaxa UK
National Stress Awareness Day
National Stress Awareness Day is on Wednesday 5th November 2014. Relaxa is offering employee stress & wellbeing health promotion packages starting at £255 on or around this date - incorporating a range of stress & wellbeing activities for your staff. There are 9 cost-effective stress and wellbeing promotion packages available below: 1) Stress Health Promotion Package 1 - £255.00+vat 2) Stress Health Promotion Package 2 - £399.00+vat 3) Stress Health Promotion Package 3
10-13-2011 | Leisure, Entertainment, Miscel …
Blue on Highland
Boss Appreciation Day
WHAT: In celebration of National Boss Day, Blue on Highland located in Needham, MA, is honoring all bosses, by offering guests a free appetizer when they dine with their boss during lunch on Monday, October 17th, 2011. Celebrated annually on October 16th, National Boss Day was founded in 1958 when Patricia Bays Haroski, an employee at State Farm Insurance Company in Deerfield, Illinois, designated it a day to show appreciation
Comments about openPR
OpenPR is clearly structured and remains true to its principle of confining itself to the essential parts. OpenPR has proven to be a very good and reliable partner to our media agency: Within the shortest time the releases are online and go down well with the media representatives. The success of OpenPR is reflected in the steadily increasing number of press releases. It is good that OpenPR exists!
Ursula Koslik, Director Marketing & PR, F+W Hamburg