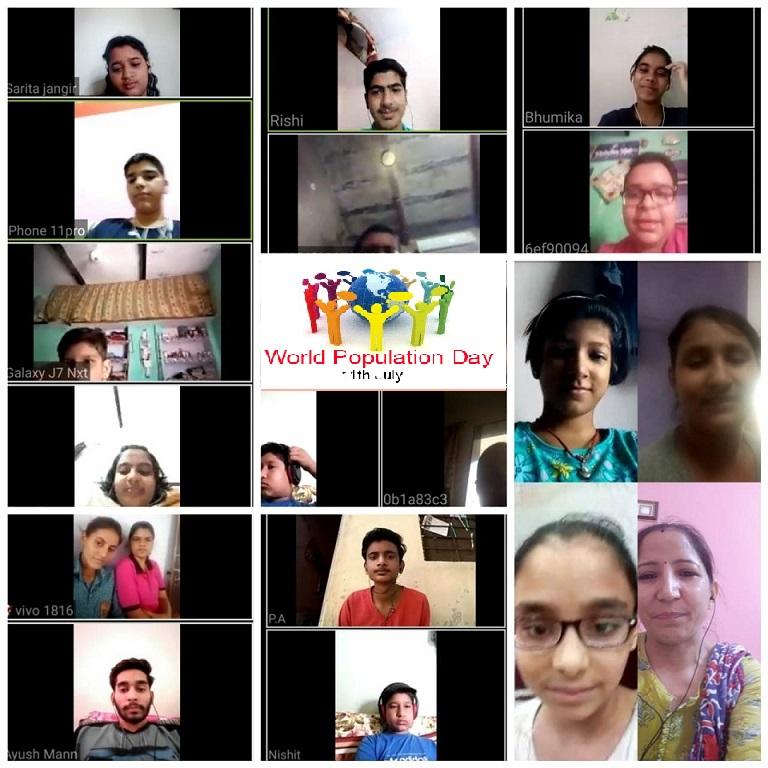 India has only 2 percent of the world's land mass but is home to 16 percent of the global population. This means natural and mineral resources of India are under acute stress as the nation at large struggles to meet the needs of the growing population. It took hundreds of thousands of years for the world population to grow to 1 billion – then in just another 200 years or so, it grew seven-fold. In 2011, the global population reached the 7 billion mark, and presently, it stands at about 7.7 billion, and it's expected to grow to around 8.5 billion in 2030, 9.7 billion in 2050, and 10.9 billion in 2100.

The United Nations – UN began observing World Population Day every year from 1989 to bring attention to the increasing global population and the associated factors. The date was chosen to commemorate 11 July, 1987, the day when the global population hit the 5 billion mark. This dramatic growth has been driven largely by increasing numbers of people surviving to reproductive age, and has been accompanied by major changes in fertility rates, increasing urbanization and accelerating migration. These trends will have far-reaching implications for generations to come.

India with its population of 139 crore, along with China which has a population of 144 crore, are among the most populous nations in the world. If this was not alarming enough, according to the UN data, India is expected to overtake China as the most populous country by the year 2027. Popularly known as School with 100% results in Board Exams of Class 10 and 12, Jamuna Mishra Academy JMA established in 2004 is one of the most sought after schools in Pilani.

It is a matter of great pride that alumni of JMA are presently pursuing higher education in various institutions which include NAAC A++ and UGC Category –I, Banasthali Vidyapith which in Times Higher Education 'THE' is Second Best Women's University in global rankings and the Institution of Eminence in India today Birla Institute of Technology and Science - BITS Pilani. JMA Pilani has established a rich tradition of observing various days of international as well as national importance on a regular basis. Due to COVID-19, with schools closed and summer break activities cancelled, parents find it indeed challenging to keep their children engaged.

Principal Mrs Booma Natarajan gave a clarion call to the teachers and students of JMA Pilani to celebrate on Zoom Sessions for interactions scheduled on 11 July 2020 and shared the above details with the students. The message from Secretary Genral UN Antonio Guterres goes as “On this World Population Day, let us act to safeguard sexual and reproductive health care, protect the health and rights of women and girls, and end gender-based violence. The pandemic has made our jobs much harder, but we must prevail.”

The focus of WPD 2020 is putting the brakes on COVID-19: how to safeguard the health and rights of women and girls now. The COVID-19 crisis has taken a staggering toll on people, communities and economies everywhere. But not everyone is affected equally. Women, who account for the largest share of front-line health workers, for example, are disproportionately exposed to the coronavirus. Supply chains around the world are being disrupted, impacting the availability of contraceptives and heightening the risk of unintended pregnancy. As countries are on lockdown and health systems struggle to cope, sexual and reproductive health services are being sidelined and gender-based violence is on the rise.

Recent UNFPA research highlighted that if the lockdown continues for 6 months with major disruptions to health services, then 47 million women in low- and middle-income countries may not be able to access modern contraceptives resulting in 7 million unintended pregnancies. 31 million additional cases of gender-based violence can also be expected. Moreover, women disproportionately work in insecure labour markets and are harder hit by the economic impacts of COVID-19.

Nearly 60 percent of women worldwide work in the informal economy, at greater risk of falling into poverty. Women’s unpaid care work has increased as a result of school closures and the increased needs of older people. Principal thanked the teachers and students for their whole hearted cooperation and enthusiastic participation in making the Zoom App based virtual celebration of World Population Day a grand success.

12-07-2018 | Health & Medicine
Spring Forest Qigong
7 Day Blessing 2019
7 Day Blessing 2019 A Free On-Line Healing Chanting Meditation Event Sunday January 6th through Saturday January 12th A new year is a time for rebirth, renewal, rejuvenation, replenishment, and rejoice. There is no better way to embrace this rekindling of the spirit than communal meditation. Join us January 6 – 12 as we follow the lead of Master Chunyi Lin and three Tibetan Monks in a collective gathering of enlightening meditation. This 7
11-20-2018 | Energy & Environment
Garware Technical Fibres
World Fisheries Day 2018
The fishing and aquaculture industry is key to meet the worldwide protein needs of an ever increasing population. Every innovation that helps a net catch only the required fish, every durable net that does not breakdown easily, and every bit of research that helps save fuel - contributes to a better world of fisheries. We at Garware Technical Fibres are committed to enhancing value of our fisheries customers through better ideas in action. World Fisheries
11-05-2018 | Logistics & Transport
Silver Service Taxi Melbourne
Melbourne Cup Day
The Melbourne Cup is annually held on the first Tuesday in 6th November with the day being a half day public holiday in Victoria and a full day holiday in Melbourne. In This event Silver Service Taxi Melbourne providing a taxi service in very affordable prices because in this event finding a taxi is very difficult and if you are lucky to get one it will cost you a fortune
06-13-2018 | Arts & Culture
SCFI Festivals Network
Father’s Day Messages
New Delhi, 12th June 2018 A father is someone who holds his children and makes all their dreams come true even if he needs to sacrifice his own dreams. Father’s day is a reminder of all those sacrifices that shapes life of many bringing out the best out of the person. The day is celebrated to bring into notice the strength in being a father and how the presence of a
10-17-2014 | Health & Medicine
Relaxa UK
National Stress Awareness Day
National Stress Awareness Day is on Wednesday 5th November 2014. Relaxa is offering employee stress & wellbeing health promotion packages starting at £255 on or around this date - incorporating a range of stress & wellbeing activities for your staff. There are 9 cost-effective stress and wellbeing promotion packages available below: 1) Stress Health Promotion Package 1 - £255.00+vat 2) Stress Health Promotion Package 2 - £399.00+vat 3) Stress Health Promotion Package 3
10-13-2011 | Leisure, Entertainment, Miscel …
Blue on Highland
Boss Appreciation Day
WHAT: In celebration of National Boss Day, Blue on Highland located in Needham, MA, is honoring all bosses, by offering guests a free appetizer when they dine with their boss during lunch on Monday, October 17th, 2011. Celebrated annually on October 16th, National Boss Day was founded in 1958 when Patricia Bays Haroski, an employee at State Farm Insurance Company in Deerfield, Illinois, designated it a day to show appreciation
Comments about openPR
9 o'clock: discuss press release with client, 10 o'clock: submit release to openPR, within the briefest possible time release is published and displayed in a prominent place on openPR.de. I am thrilled!
Zehra Spindler, Calypso Now! - Communication Agency