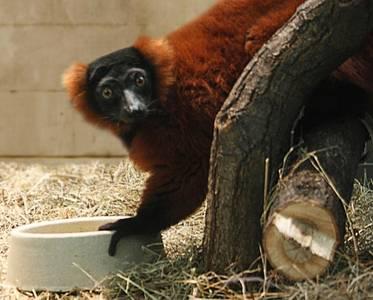 Welcome to the Jungle House at Hannover Adventure Zoo!

The red ruffed lemur is one of the largest of the lemur subspecies and is generally a friendly character. Although not as slow as the sloth in the jungle house, they are also not as quick as the Syke's monkeys in the enclosure next door. They move at their own pace, which can change instantly when there's food in the offing. As soon as a bowl of fresh fruit is placed in the enclosure, the lemurs appear as reddish-brown flashes, darting in from all corners and only coming to a stop at the fruit bowl. They have a quick look around, a careful sniff and then grab what they can.

A group of five red ruffed lemurs arrived on 8 December from Opole Zoo in Poland, first spending some time in quarantine at Hannover Adventure Zoo. Yesterday father Rudek (dob 22 June 1996) and his four sons, Lolek, Bolek, Marek and Bitek (two born on 30 April 2003 and two on 20 April 2005) were let out into their enclosure. Thanks to lots of climbing options and a soft hay floor-covering, they quickly settled down and each has found a favourite spot. Visitors to the zoo are now carefully observed from on high by five lemurs.

In the wild, red ruffed lemurs are only native to the Masoala peninsula in north-eastern Madagascar. They live in groups, usually in the tree tops, and communicate with one another by raucous calls. When the first explorers reached Madagascar from Europe in the 16th century, they were greeted by bright eyes and haunting noises. They thought of lemurs (lemur didn't then refer to a cute prosimian, but to "spirits of the dead" in Roman mythology).

We now know that lemurs (the primates, not the ghosts) are very friendly and prefer lying in the sun to scaring people. The red ruffed lemurs in the tropics house really have nothing in common with ghosts, even though when rushing for food, all you see is a reddish-brown shadow.

Description of red ruffed lemur
Red ruffed lemur is the largest of the Lemuridae family. They communicate with loud calls. They seem to move slowly, but are excellent jumpers.

You can edit or delete your press release Sun lover or nightmare? here