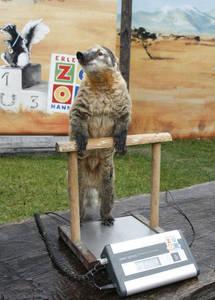 Show star Diego is being weight

Just like every other company, once a year the zoo takes stock of its worldly and valuable possessions, in this case its animals and its visitors.

The bipedal homo sapiens species makes life quite easy for our staff: they arrive throughout the course of the year under their own locomotion through a turnstile at the zoo entrance where they are counted automatically. On 31 December 2011 the team of Hannover Adventure Zoo had many reasons to celebrate: with a count of 1,619,186 visitors, the record of the previous year (1,602,257) was broken! "We are very proud and incredibly happy that the Adventure Zoo has such an enthusiastic following," says Zoo Director Frank Werner.

Not every species found at the zoo is as co-operative during the inventory count. The house mouse simply won’t keep still, the loris in the tropical house flew all over the place, the kangaroo babies disappeared into pouches and as for the gold fish, instead of waiting to be counted, they simply dived down and away. Nonetheless: from antelope to zebra, every single animal was noted down, just like taking stock in your local DIY store – only more confusing.

Because they are constantly on the move, some animal numbers are estimated using a variety of more or less sophisticated methods, like for a flock of birds in the jungle house or the trout in the harbour of Yukon Bay. Since birds on the wing can't all be caught, the trick is to observe their feeding places for hours on end. The number of birds seen there is then extrapolated. The trout are observed by the zoo keepers when they dive, and an estimate made.

Counting ants climbing up and down through an extensive tubular labyrinth is a Sisyphean task. The leaf-cutter ant is noted down as one animal – even though there are of course thousands of tiny individuals. Counting the hippopotamuses is easy in comparison: the four friendly giants simply doze in the water, yawning on occasions. And the 13 members of the elephant brigade stand to attention when called to order. The favourite job is always counting the sloths and the East African land snails: they keep perfectly still even when taking part in the annual inventory count.

After the count, zoo staff compare their figures with ongoing records. Every single day the keepers keep a log of animals born, those which have died, moved away or arrived. The daily figures are entered by hand in the animal stock book and then transferred into the computer system. The result of the final annual inventory count is then compared with the computer records. If an animal is missing, or there is one too many, the count is repeated.

The animal inventory concludes with a full annual report, prepared diligently and in great detail by the zoo trustees. The annual report is sent to the Lower Saxony state office for water economy, coast and nature protection (NLWKN) as well as zoo shareholders and the veterinary office. This procedure ensures that every single animal, from the spiny mouse to the elephants "are properly filed".

The count of the animals involves more than only numbers: they are also weighed and measured providing comparative values and scientific information. The figures collected are published in science journals and are a source of information concerning animal development. The comparative figures from other zoos around the world can be used for example to check that an animal is developing as it should.

Some examples from the count:

The tallest animal: bull giraffe Schorse, stands 5.80 metres tall
The heaviest animal: bull elephant Nikolai, weighs in at 4.7 tonnes
The longest animal: tiger python Moses Junior I., an impressive 5.10 metres
The smallest animal: Henrike the Ant is only 0.5 cm short
The oldest animal: Andes condor "Julchen" is 50 years old
The most recent newborn: Bennett kangaroo (dob 22.12.2011, in the case of kangaroos the "birthday" is the day in which a new animal looks out of the pouch for the first time).

You can edit or delete your press release Incredibly successful year for Hannover Adventure Zoo! here