New in Hannover: The crossword antelope 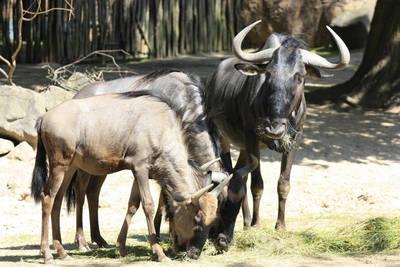 The new arrival is known to all crossword fans: antelope with three letters? Gnu. Three of these nice antelopes have now moved into the Zambesi habitat at Hannover Adventure Zoo.

Their long dark faces, curved horns and elegant blue-brown striped fur give them an impressive appearance. Especially fashionable: a dark beard under the chin – also worn by the females of the species.

Prinz is a two-year old bull from Belgium; one and a half year old Iwona and six month old Douchka both left France to be in Hannover. All three arrived in May, first spending time behind the scenes in their stables, then getting to know their new home step-by-step and finally meeting their new cohabitants – the ostriches. As of last week, these imposing antelope cows appear very much at home and are visible the whole day long.

The plains zebra on the neighbouring steppe initially gave the striped antelopes wary looks. Up until then they had been the experts in stripy fur. But they quickly adapted to the new situation. The zebra stallion born on 5 June, as yet unnamed, even swapped its traditional black and white get-up for gnu-like dark stripes on a brown fur background. As a gesture of welcome.

You can edit or delete your press release New in Hannover: The crossword antelope here