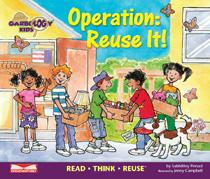 "Young readers will learn about reusing in an engaging matter as the story of Operation: Reuse It! unfolds and the children think of creative ways to find new life for Mr. Ogilvy’s old stuff." —Rutgers University Project on Economics and ChildrenToronto, ON—Author Sabbithry has just released her second book in the Garbology Kids series, ‘Operation: Reuse It!’The old adage “one man’s trash is another man’s treasure” reverberates throughout this book. Chock full of information, ‘Operation: Reuse It!’ provides children with an engaging way to explore the many different ways to reuse. Persad says reusing is something people have been doing for centuries. With the rise in disposable products, there has been a drift away from reuse habits. The idea is to get children thinking about this age-old concept through an engaging story, facts and exercises at an early age. Says Persad, “I hope children will play, explore, and pick up a few habits as they read the story. If they do, then perhaps I have helped in some way. The book was written in such a way that anyone could read it… Parents will take away a few things, too. Releasing the second book in the Garbology Kids series is a new and exciting step for me. Each time I attempt to broaden a horizon I have to take a deep breath.”Persad had been working on the second book when she released her first book ‘Where Do Recyclable Materials Go?’ earlier this year in April. The traditional Paperback version of her first book already had a five-star rating at Amazon.com.Both books in the Garbology Kids series are available through Amazon.com and through links at GarbologyKids.com.Operation: Reuse It! and Where Do Recyclable Materials Go? are available for Retail Purchase at Amazon.com. Retailers may order the Paperback version of both books through Independent Publisher’s Group with Firewater Media Group the publisher.Sabbithry Persad is the founder of Green Solutions Magazine and is a member of the Society of Children’s Book Writers and Illustrators. She currently lives in Toronto, Ontario.Firewater Media Group P.O. Box 65001, RPO Chester Toronto, ON M4K 3Z2Publicist

03-15-2011 | Leisure, Entertainment, Miscel …
Firewater Media Group
Garbology Kids™ - Book, Tote & Tee Giveaway
Garbology Kids™ has a special promotion for a book, tote and t-shirt on GarbologyKids.com for the release of “Where Do Recyclable Materials Go?” From the founder of Green Solutions Magazine comes the cheery series with kids who investigate waste and clean up their community. After their dog Bubbles chases after the recycling truck, Tiana and her family set off on a search to the Materials Recovery Facility, learning about recycling along the
03-09-2011 | Energy & Environment
Firewater Media Group
Even Kids Can Do Their Part to "Erase Waste"
• Recycling one aluminum can saves enough energy to run a TV for 3 hours! • A modern glass bottle would take 4000 years or more to decompose -- and even longer if it's in the landfill! • If all our newspaper was recycled, we could save around 250,000,000 trees each year! • 9.1 billion plastic bottles were disposed of in 2002 with only 360 million of them being

11-19-2020 | Health & Medicine
DR. SHISHIR KUMAR SPINE CLINIC
NO OPERATION! NO SURGERY!!
PUBLIC ANNOUNCEMENT FOR A FREE, OPEN WEBINAR ON NON-SURGICAL TREATMENT OF COMMON SPINE DISEASES, BY DR. SHISHIR KUMAR @11AM, ON SUNDAY 22/NOVEMBER/2020 India's leading spine surgeon, Dr. Shishir Kumar will be conducting a public education webinar titled "No operation!" to spread awareness about the non-surgical management of spine diseases. This public webinar is free to access across the world and is scheduled for 11 a.m. IST on Sunday, 22nd Nov 2020.
10-27-2017 | Fashion, Lifestyle, Trends
Born Ready Apparel
Operation Iraqi Freedom challenge coin
Born Ready Apparel is honored to present our first Operation Iraqi Freedom challenge coin. This is an original and veteran designed Operation Iraqi Freedom coin double-sided and hand painted coin All coins are serialized to show their unique nature. One side displays a deep 3D crafted design honoring the OIF campaign. The beautiful hand-painted Iraq Campaign Medal lies at the heart of the coin. The coin itself takes the shape
05-15-2017 | Science & Education
PR&D
More than just an operation
Losing weight by surgical intervention involves more than just shedding body fat. It is a very challenging start on a new life with a surprising number of durable positive effects. This has been shown by a study funded by the Austrian Science Fund FWF. The results are impressive: after bariatric surgery (a gastric bypass, for instance) long-term positive effects were observed. They included not only a lasting reduction in weight, but
10-26-2012 | Business, Economy, Finances, B …
Direct Force Enterprises
Local Marketing Firm Supports Operation Smile
Knoxville, TN October 17, 2012- Direct Force Enterprises, Inc., a Knoxville based promotional sales and marketing firm held a charity event at Strang Senior Center. They assisted with a Halloween Party, which included: Bingo, Refreshments, and a Costume Contest. The event was a huge success; DFE was able to raise a generous amount of funds for Operation Smile. Operation Smile is a Non-Profit organization whose mission is
04-13-2012 | Business, Economy, Finances, B …
Gower Publishing Ltd
The Road to Co-operation
Gordon Pearson offers this critical and informed protest against the absurdity and error of economic theory, shedding new light on the predicament faced in 2012. He highlights the dangers of using bizarre mathematical models to guide policy prescriptions, arguing that the global challenges of growth and sustainability affect free market fundamentalist orthodoxy, causing a negative impact on enterprises, their governance and their stakeholders. His proposed realistic changes in policy and
12-02-2010 | IT, New Media & Software
Solix Technologies, Inc.
Solix Technologies extends its operation to Middle
Santa Clara, CA (December 1, 2010) - Solix Technologies, a leading provider of enterprise data management solutions announced today launch of its Middle East operations. Extending its operations to Middle East was necessitated to support its fast growth in this market. Solix Middle East office has recruited a team consisting of roles of channel management, technical support and marketing. The main goal of Solix Middle East is to provide responsive
Comments about openPR
We publish our press releases on openPR.de because we like people who are "open" - just like us.
Frank Obels, CEO, INCONET - Informationssysteme, Communication und Netzwerkberatung GmbH