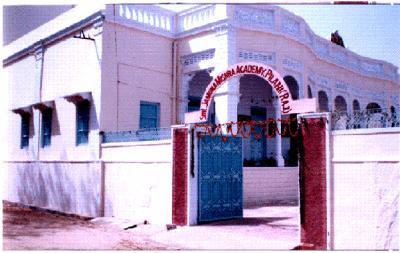 Located in the heart of Shekhawati region of Rajasthan, Pilani is well known in India today for various top ranking educational institutions, CSIR Laboratory CEERI as well as the upcoming BrahMos Missile Assembly Project unit. Jamuna Mishra Academy – JMA established in the year 2004 which has been making rapid strides in early childhood education is presently one among the top ranking and most sought after schools at Pilani Rajasthan. JMA which started with an enrollment of 60 students for the Nursery, LKG, First Junior and Class1 has grown today till Class VIII with well over 500 students. The girl student enrollment has been steadily rising every year and is presently close to 50% of the total strength which itself is a matter of pride in a state like Rajasthan which had alarmingly low record of girl’s education. JMA Pilani regularly celebrates various days of national and international significance which include the recent ones such as Hindi Diwas Day, Engineers Day, International Ozone Day etc.The first International Day of Peace also known as World Peace day was observed in 1982 and 2011 is the 30th anniversary of same. It was earlier celebrated on the third Tuesday in September but after 2001 it is being observed on September 21. JMA Principal Mrs Booma Natarajan addressed the students and teachers of the school and gave an overview of the significance of the day and emphasized on this year theme "Peace and Democracy: Make Your Voice Heard" with the famous Gettysburg Address quote of Abraham Lincoln "Democracy is a Government of the people by the people and for the people". The teachers and students also recited the song used by the United Nations and UNICEF "Let there be peace on earth and let it begin with me. Let there be peace on earth, the peace that was meant to be". In 1955, Sy Miller and Jill Jackson had created this popular ballad, which has since been recorded by numerous artists and performed around the world. For more details about JMA Pilani see http://www.jma-pilani.page.tl/About JMA Pilani: Smt Jamuna Mishra Academy - JMA Pilani is a Co-educational English Medium School with Experienced Teachers, Spacious Classrooms and Modern Amenities Designed to impart Quality Education combined with All Round Personality Development and lay the Best Foundation for the Child's Future. For more details about JMA Pilani see http://www.jma-pilani.page.tl/Mrs Booma Natarajan MSc (Chemistry), MA (Childcare & Education), B.Ed Principal Jamuna Mishra Academy – JMA Near Old Post Office Atma Ram Padia Marg Pilani Rajasthan 333031 India Phone 91-1596-242314 Email booma_pilani at yahoo.co.in Website http://www.jma-pilani.page.tl/

11-20-2018 | Energy & Environment
Garware Technical Fibres
World Fisheries Day 2018
The fishing and aquaculture industry is key to meet the worldwide protein needs of an ever increasing population. Every innovation that helps a net catch only the required fish, every durable net that does not breakdown easily, and every bit of research that helps save fuel - contributes to a better world of fisheries. We at Garware Technical Fibres are committed to enhancing value of our fisheries customers through better ideas in action. World Fisheries
10-29-2018 | Fashion, Lifestyle, Trends
The Tech Reps
National Smart Home Day
National Smart Home Day Event Press Release National Smart Home Info@NationalSmartHome.org For Immediate Release: National Smart Home Plans National Smart Home Day to help educate and bring awareness to homeowners for smart home living National Smart Home will hold National Smart Home Day on Saturday November 3rd for manufacturers suppliers, dealers and homeowners. The event, which will be held at Rayva Home theaters showroom in Valhalla NY and streamed live across the
06-13-2018 | Arts & Culture
SCFI Festivals Network
Father’s Day Messages
New Delhi, 12th June 2018 A father is someone who holds his children and makes all their dreams come true even if he needs to sacrifice his own dreams. Father’s day is a reminder of all those sacrifices that shapes life of many bringing out the best out of the person. The day is celebrated to bring into notice the strength in being a father and how the presence of a
10-17-2014 | Health & Medicine
Relaxa UK
National Stress Awareness Day
National Stress Awareness Day is on Wednesday 5th November 2014. Relaxa is offering employee stress & wellbeing health promotion packages starting at £255 on or around this date - incorporating a range of stress & wellbeing activities for your staff. There are 9 cost-effective stress and wellbeing promotion packages available below: 1) Stress Health Promotion Package 1 - £255.00+vat 2) Stress Health Promotion Package 2 - £399.00+vat 3) Stress Health Promotion Package 3
10-10-2014 | Energy & Environment
Aeon Lighting Technology Inc.
ALT Coastal Cleanup Day
(October 9, 2014 – Taipei) ALT (Aeon Lighting Technology) employees with friends and family participated, on October 4, in a beach clean-up organized by and between North Coast with Guanyinshan National Scenic Area and ALT. ALT staff and family members spent a joyous afternoon cleaning up the Laomei Green Reef Beach in the northeastern coast of Taiwan. The result was positive: over 200 kilos of waste and garbage were collected.
09-22-2011 | Energy & Environment
PowerContinuity Systems
PowerContinuity Saves the Day
When Dartford Borough council decided for the first time to install an automatic power protection system, with diesel generator, for their 5,000 employees at their council head office, after due diligence they chose PowerContinuity. Council representative Dave Webber remarked, ‘We are pleased to confirm that PowerContinuity Systems performance was true to their commitment, with the project completed within the time frame and to budget.’ PowerContinuity designed, manufactured and installed the
Comments about openPR
OpenPR ist the nicest and most clearly laid out PR platform I have seen to this day. The press releases are displayed very nicely and clearly and without any unnecessary frills. The updates are fast and the finished release looks appealing and is clearly legible. Even with 16 years of experience one discovers new things from time to time. Congratulations!
Gabriele Ketterl, Director Marketing & PR, Menads