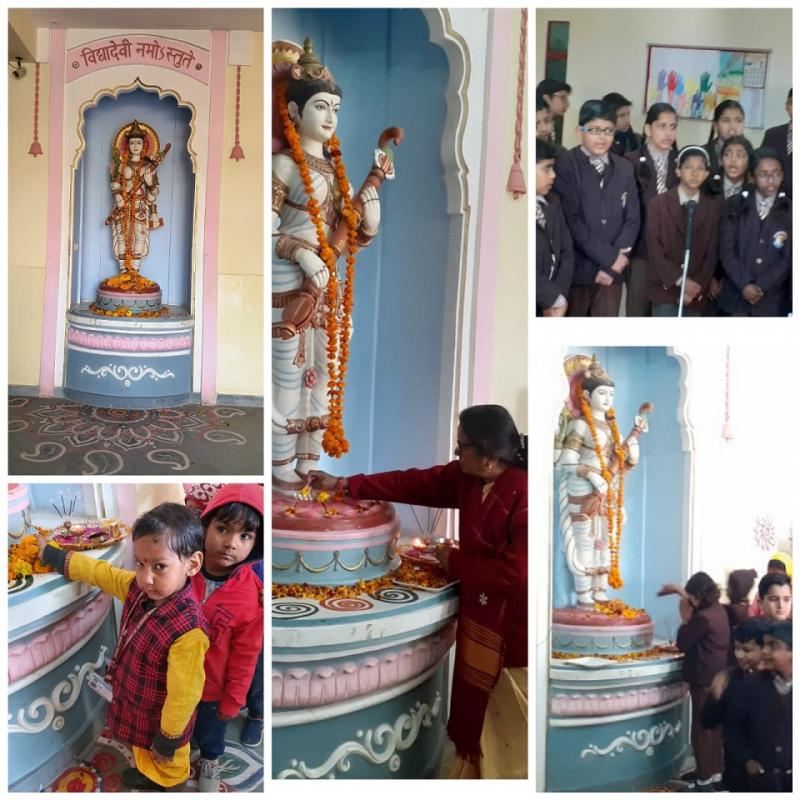 The institutions established by the Birla Education Trust - BET including Birla Institute of Technology and Science - BITS Pilani which is an Institution of Eminence celebrate Basant Panchami as the Founders Day. Considering the significance of the day, freedom fighter Bharat Ratna Mahamana Madan Mohan Malviya had founded the famous Banaras Hindu University BHU on this very day in 1916. Rajasthan and Punjab on Basant Panchami go high with Kite Flying while the length and breadth of Bengal celebrates as Saraswati Puja. Basant Panchmi is celebrated on the fifth day (Panchami Tithi) of the bright fortnight (Shukla Paksha) of the Hindu month Magh. It is said that from this day the spring season (Vasant Ritu) begins and the day is dedicated to worship of Goddess Saraswati. Some of the famous poems written for the occasion include "Vasant Panchami" and "Song in Spring" by Sarojini Naidu nee Chattopadhyay popularly known as The Nightingale of India and the Poem "One Day in Spring" written by Viswa Kavi Nobel Laureate Gurudev Rabindranath Tagore.Right from its inception, Smt Jamuna Mishra Academy - JMA Pilani has embarked on a rich tradition of celebrating various days of national and international significance. It is a matter of great pride that alumni of JMA Pilani are presently pursuing higher education in various institutions which include Banasthali Vidyapith which is not only in various QS Rankings but also in Times Higher Education THE World Rankings as Second Best Women's University in the world and BITS Pilani. Dr Brij Mohan Mishra, founder of JMA was particular that every year Basant Panchami day be celebrated in the most befitting manner. A legend says that it was on Basant Panchami day that Lord Ram, tasted the half-eaten berries famously offered by Shabari out of her love and generosity. The school which is one among the top ranking schools in Pilani today organized on 30 Jan 2020 a colorful function to celebrate Basant Panchami which is also known as Shri Panchami and Saraswati Panchami. Principal Mrs Booma Natarajan lit the lamp and gave a devotional start to the celebrations. Teachers and students offered flowers to Ma Saraswati the goddess of knowledge, music, art, wisdom and learning. The school choir rendered several shlokas and devotional songs dedicated to Goddess Saraswati. When the celebrations ended, the parents and children who had come for the function left with beaming faces and pride that they were indeed part of an institution which is a shining jewel in the crown among the schools at Pilani.For more details about JMA Pilani see http://www.jmapilani.org/Default.aspxMrs Booma Natarajan, M.Sc., M.A., B.Ed. Principal, Jamuna Mishra Academy - JMA Near Old Pilani Post Office Pilani Rajasthan 333031 India Phone 91-1596-242314 Email booma_pilani at yahoo.co.in Website: http://www.jmapilani.org/Default.aspx FaceBook: https://www.facebook.com/JMAPilaniRajasthanRank1/About JMA Pilani: Jamuna Mishra Academy - JMA Pilani is a Co-educational English Medium School with Experienced Teachers, Spacious Classrooms and Modern Amenities designed to impart Quality Education combined with All Round Personality Development and lay the Best Foundation for the Child's Future. While the school admits both boys and girls, the girl student enrollment has been steadily rising every year and is presently nearly 50% of the total strength. Right from its inception, JMA Pilani has embarked on a rich tradition of celebrating various days of national and international significance and festivals which makes it a cut above the rest schools in Pilani. The school has for boys and girls Scout and NCC, girls' band which has been winning laurels every year. NCC cadets of JMA Pilani have also been selected for participation in Republic Day Camp RDC and Shivaji Trail Trek. Yoga, Karate, Painting and Music are not just part of school routine but a way of life for the students. It is a matter of great pride that JMA Pilani is referred popularly as the School with 100% Results on account of outstanding results year after year in Board of Secondary Education Rajasthan RBSE Class X and Class 12.