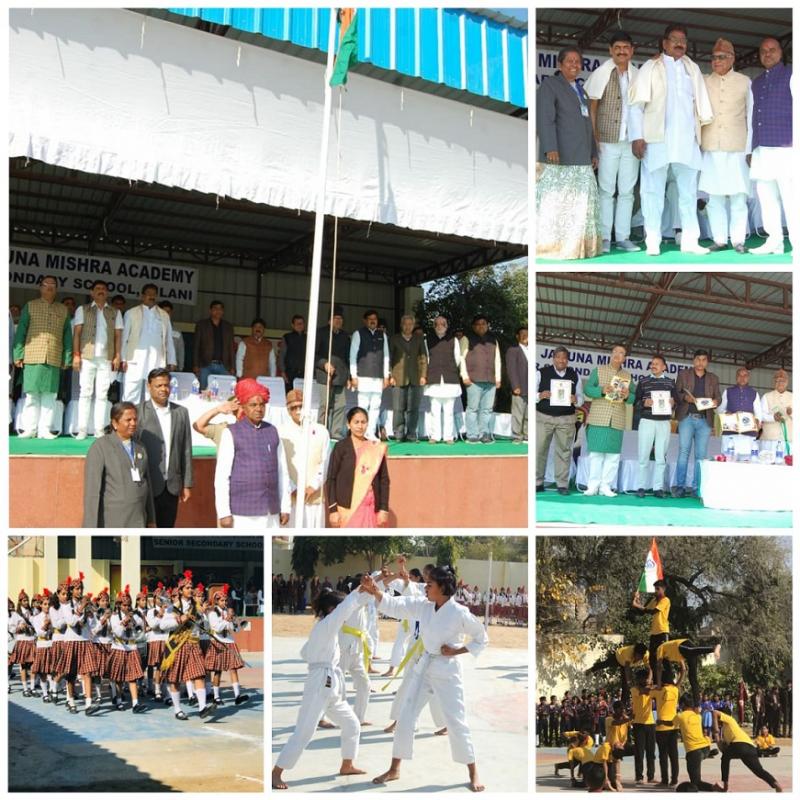 Undoubtedly, the India today we live is infinitely more prosperous, more creative, more resilient than at any time since becoming a Republic on 26th January 1950 assured by the Constitution free to celebrate its diversity and differences, its many languages, faiths and cultures; free to be different and respected for it. Even though in 1930, 26 January was visualized as Independence Day with declaration of Purna Swaraj, the turn of events brought in 15 Aug 1947 as Independence Day and 26 Jan 1950 as Republic Day.

Smt Jamuna Mishra Academy - JMA established in the year 2004 at Pilani which is considered as Oasis in the desert state of Rajasthan has set a rich tradition of celebrating various days of national as well as international importance on a regular basis. It is a matter of great pride that alumni of JMA Pilani are presently pursuing higher education in various institutions which include Banasthali Vidyapith which is not only in various QS Rankings but also in THE Times Higher Education Global Rankings as Second Best Women's University in the world and Birla Institute of Technology and Science BITS Pilani which is one of the Institutions of Eminence.

With the unfurling of Tricolor and singing of National Anthem, Principal Mrs Booma Natarajan gave the welcome address. School teacher Sri Mahendra Kumar who anchored the proceedings and proposed vote of thanks introduced the chief guest to the audience. Following the rendering of a passion packed patriotic song, Chief Guest inspected the parade and took the salute of the march past. Following a spectacular Band display by the girls , prize distribution for various achievements took place. 28 students from Class 1 Junior to Class 12 got topper award for 2019-20 based on their first term examinations.

The 8 basketball players who brought glory to the Alma mater by winning National Championship at Udaipur received Gold medals and certificates. Aryan Soni who participated at State level for INSPIRE received his certificate and a glittering memento. Baroda Gramin Bank gave cash award to both Aryan Soni and Ankit Saini for participating at District Level for INSPIRE competition. Class 9 student Priyanshu Sharma received a thunderous round of applause for his soul stirring Hindi speech.

The action packed Karate display literally had the audience sitting at the edge of their seats. The school annual magazine SPECTRUM true its name had a colourful release. The yoga display received repeated rounds of applause. Congratulating the Principal, teachers, staff and management of JMA Pilani, the Chief Guest in his inspiring speech urged the students to be dreamers, performers as well as achievers and serve the nation in the best possible manner. When the Republic Day celebrations ended, the students who participated left with sweet memories of a good day holding chocolates and biscuits and beaming faces and pride that they were indeed part of an institution which is a shining jewel in the crown among the schools at Pilani.

About JMA Pilani: Jamuna Mishra Academy - JMA Pilani is a Co-educational English Medium School with Experienced Teachers, Spacious Classrooms and Modern Amenities designed to impart Quality Education combined with All Round Personality Development and lay the Best Foundation for the Child's Future. While the school admits both boys and girls, the girl student enrollment has been steadily rising every year and is presently nearly 50% of the total strength. Right from its inception, JMA Pilani has embarked on a rich tradition of celebrating various days of national and international significance and festivals which makes it a cut above the rest schools in Pilani. The school has for boys and girls Scout and NCC, girls' band which has been winning laurels every year. NCC cadets of JMA Pilani have also been selected for participation in Republic Day Camp RDC and Shivaji Trail Trek. Yoga, Karate, Painting and Music are not just part of school routine but a way of life for the students. It is a matter of great pride that JMA Pilani is referred popularly as the School with 100% Results on account of outstanding results year after year in Board of Secondary Education Rajasthan RBSE Class X and Class 12.

12-07-2018 | Health & Medicine
Spring Forest Qigong
7 Day Blessing 2019
7 Day Blessing 2019 A Free On-Line Healing Chanting Meditation Event Sunday January 6th through Saturday January 12th A new year is a time for rebirth, renewal, rejuvenation, replenishment, and rejoice. There is no better way to embrace this rekindling of the spirit than communal meditation. Join us January 6 – 12 as we follow the lead of Master Chunyi Lin and three Tibetan Monks in a collective gathering of enlightening meditation. This 7
11-05-2018 | Logistics & Transport
Silver Service Taxi Melbourne
Melbourne Cup Day
The Melbourne Cup is annually held on the first Tuesday in 6th November with the day being a half day public holiday in Victoria and a full day holiday in Melbourne. In This event Silver Service Taxi Melbourne providing a taxi service in very affordable prices because in this event finding a taxi is very difficult and if you are lucky to get one it will cost you a fortune
03-16-2017 | IT, New Media & Software
Algoworks
Women’s Day Celebrations 2017
On the occasion of International Women’s Day, Algoworks celebrated this special time with joy and delight by expressing gratitude towards the women of their workplace, and made them feel special and loved. The entire day was dedicated to all the women employees of Algoworks and their valuable presence in the team was celebrated with glee. The entire premises were adorned with balloons and flowers. Women employees were dressed up in
09-23-2016 | Health & Medicine
PRO RETINA Deutschland e.V.
World Retina Day 2016
On World Retina Day, Saturday September 24th 2016, Retina International urges the Global Retina Community to advocate for access to Genotyping services that will expedite the development of therapies for unmet need. Retinal Diseases are among the most common causes of vision loss in the global working population. The impact of these conditions on quality of life, be they rare and inherited or age-related, is immense. However there is
10-17-2014 | Health & Medicine
Relaxa UK
National Stress Awareness Day
National Stress Awareness Day is on Wednesday 5th November 2014. Relaxa is offering employee stress & wellbeing health promotion packages starting at £255 on or around this date - incorporating a range of stress & wellbeing activities for your staff. There are 9 cost-effective stress and wellbeing promotion packages available below: 1) Stress Health Promotion Package 1 - £255.00+vat 2) Stress Health Promotion Package 2 - £399.00+vat 3) Stress Health Promotion Package 3
10-13-2011 | Leisure, Entertainment, Miscel …
Blue on Highland
Boss Appreciation Day
WHAT: In celebration of National Boss Day, Blue on Highland located in Needham, MA, is honoring all bosses, by offering guests a free appetizer when they dine with their boss during lunch on Monday, October 17th, 2011. Celebrated annually on October 16th, National Boss Day was founded in 1958 when Patricia Bays Haroski, an employee at State Farm Insurance Company in Deerfield, Illinois, designated it a day to show appreciation
Comments about openPR
OpenPR is clearly structured and remains true to its principle of confining itself to the essential parts. OpenPR has proven to be a very good and reliable partner to our media agency: Within the shortest time the releases are online and go down well with the media representatives. The success of OpenPR is reflected in the steadily increasing number of press releases. It is good that OpenPR exists!
Ursula Koslik, Director Marketing & PR, F+W Hamburg