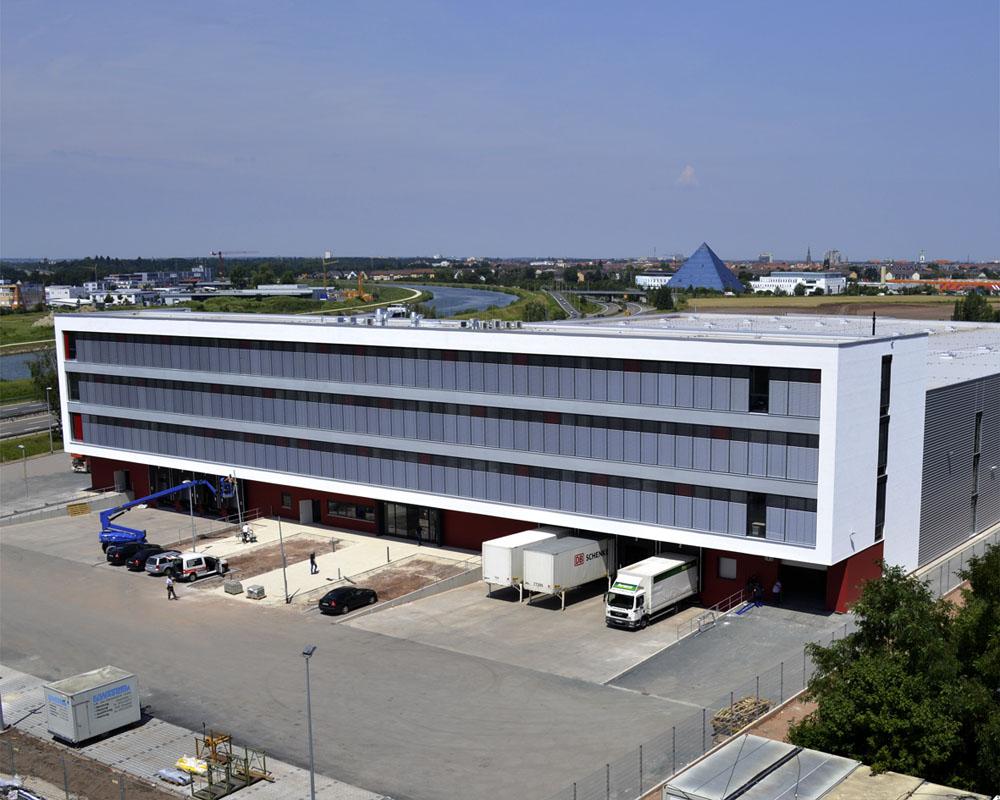 Nuremberg, 12 July 2011 – Coinciding with the 60th anniversary of Semikron the company further expands its headquarters in Nuremberg. A state-of-the-art logistics centre with an utilisation area of 12 300 m² is added to the total area of 42 000 m². With this latest development Semikron is geared for the expected future growth. During 2010 and 2011 a total of €114 million has been invested in the expansion of production areas and equipment worldwide. The opening ceremony takes place on Tuesday, 12 July 2011. Marking its 60th anniversary, Semikron announced a turnover of € 545 million for the business year 2010. This is an increase of 68% compared to 2009. Since the first diode/ thyristor module was developed and presented to the market in 1975, Semikron has been the market leader in this sector. According to IMS Research, “The global power semiconductor market 2010”, the company still leads with a market share of 30%. 31% of the turnover is generated from the renewable energies market which has more than doubled over the last three years, following the drives market with a share of thirty five percent. Semikron developed the first IGBT modules for use in wind turbines the beginning of the 1990´s. These modules featured innovative pressure contact technology, integrated power, driver and sensor functions and met the challenges posed by this entirely new area of application in terms of long-term reliability and power density.The experience in the electric hybrid vehicle market also dates back to the early 1990`s, long before the German government announced that one million passenger cars must be electrically driven by 2020. In 2010 Semikron introduced Skai, the most compact power electronic systems for hybrid and electric vehicles for use in the agricultural industry, construction industry, materials handling and battery-powered vehicles of any kind. The dedication to this market is evident in partner cooperations with Compact Dynamics and Drivetek and the 100% take-over of Vepoint. 560.000 electric fork lifts and 8.250 hybrid busses are powered by Semikron technology. In May this year a revolutionary packaging technology for power semiconductors which does away with bond wires, solders and thermal paste was launched. This reliable and space-saving technology is the optimum solution for vehicle and wind power applications, markets with a high growth rate.The family business started from humble beginnings in Nuremberg in 1951 but has established itself as a global player and power electronics innovator to be reckoned with in this industry: 3.600 employees, 35 companies, 10 production sites and market leader in diode/thyristor modules for thirty six years. “We set the trend, we do not imitate is our philosophy”, states Dirk Heidenreich, CEO of Semikron International. To guarantee the further growth Semikron has increased the number of employees from 2.700 in 2009 to 3.600 in 2011, in Nuremberg from 1.190 to 1.500. One of the driving forces behind this growth over the past 60 years is contributed to the continuity in management. But also the continuious striving for innovations in power electronics, specifically packaging technologies for power electronic modules which allows for higher efficiency, reliability and decreased size - green technologies dealing with energy generation and conversion.About SEMIKRON: Semikron is an internationally leading power semiconductor manufacturer. 2011 marks the 60th anniversary of the German-based family enterprise which employs 3600 people worldwide. A global network of 35 companies with production plants in Brazil, China, France, Germany, India, Italy, Korea, Slovakia, South Africa and USA guarantees fast and competent on-site customer care. Semikron is a one-stop provider of chips, discrete semiconductors, transistor, diode and thyristor power modules, power assemblies and systems for markets such as industrial drives, wind and solar, hybrid and electric vehicles, the rail industry and power supplies. Globally Semikron technology powers nearly every second windmill. According to a survey carried out by BTM Consult ApS, the total wind power capacity installed until 2009 was 122 Gigawatt. 57 Gigawatt comprises power semiconductors from Semikron. The dedication to the hybrid and electric vehicle market is evident in the development and production of power semiconductors for this market but also the majority take-over of Compact Dynamics GmbH, a development specialist for innovative control systems, the joint venture with drivetek, a provider for application-specific control technology, and the take-over of VePOINT, developing and producing inverters, DC/DC converters and chargers. Semikron is the market leader in the field of diode/thyristor semiconductor modules, enjoying a 30% share of the worldwide market. (Source: IMS Research „The global power semiconductor market 2010”) www.semikron.com.SEMIKRON INTERNATIONAL GmbH Annette Müller Manager International Communications Sigmund Street 200 90431 Nürnberg Tel: +49-(0) 911-6559-158/ Fax: +49-(0) 911-6559-77158 annette.mueller@semikron.com

10-13-2020 | Science & Education
Ku/Ra, TH Nürnberg
Despite of Corona: Universities in Nuremberg/Germany and Connecticut/USA go Inte …
From diagnostics in medicine to driverless cars - the range of applications in the field of Digital Image Processing is constantly growing. In September of 2020, almost 20 students from the Nuremberg Institute of Technology (Nuremberg Tech) had the opportunity to take part in the course "Digital Image Processing" given by Dr. Alaa F. Sheta, Professor at the Southern Connecticut State University (USA), to learn more about AI and digital
02-05-2019 | Business, Economy, Finances, B …
Kräuter Mix GmbH
Kräuter Mix celebrates 100th anniversary at Biofach in Nuremberg
Kräuter Mix GmbH has good reason to celebrate: 2019 is an important year for the producer of herbal raw materials, ranging from aniseed and coriander to chives and onions. The company will celebrate its 100th anniversary. On 1 April 1919, the family business was created when Christoph Mix Sr., the (great-)grandfather of today's owners, founded his own business to grow, process and sell medicinal plants in the German town of
10-11-2018 | IT, New Media & Software
achelos GmbH
achelos Presents Extensive Security Portfolio for Critical Infrastructures at it …
IT Security Compliance Consulting and Remote Testing – new product and service offer from achelos Nuremberg/Paderborn, October 09, 2018 – From October 9 to 11, achelos GmbH will be presenting at it-sa 2018 in Nuremberg, the largest IT security exhibition in the German-speaking region. The security experts from Paderborn are introducing new business models for remote testing (Testing as a Service) and an extensive product and solutions portfolio for
02-20-2018 | Arts & Culture
GALERIE FLUEGEL-RONCAK
FRANK FLUEGEL GALLERY opens exhibition „XOOOOX – LOOKIE LOOKIE“ on March 1 …
FRANK FLUEGEL GALLERY, with a strong focus on Contemporary Art and Pop Art will hold its opening reception in Nuremberg for the new show „XOOOOX – LOOKIE LOOKIE“ from 7:00 pm to 9:00 pm on Friday, March 16th 2018. On view are mostly new unique works on wood and metal. The exhibition runs through April 28th 2018. XOOOOX (*1979) is a German street artist who lives and works in Berlin. Similar
02-05-2018 | Business, Economy, Finances, B …
Organic Products India
Organic Products India exhibiting at ‘BIOFACH 2018’ in Nuremberg, Germany
Leading Indian company dealing in natural herbs, organic spices and seeds to showcase their products in 'Biofach 2018' from 14th to 17th February. Nuremberg, Germany, 13th February, 2018 – The global awareness of the goodness of natural resources resulted in ‘organic’ becoming the new mantra for food producers. That is why it is a great opportunity for Organic Products India to participate in Biofach 2018 to be held from 14th to
08-10-2011 | Industry, Real Estate & Constr …
Schaltbau GmbH
Schaltbau GmbH at SPS/IPC/DRIVES in Nuremberg
Munich, 05 August 2011: “Safety matters” – is the motto under which Schaltbau GmbH will be appearing this year at SPS/IPC/DRIVES (22 to 24 November 2011) in Nuremberg. Key exhibits include the snap-action switches of the S850 and S880 series. The decisive factor for the development of the S850 series, a double NC contact switch, was the new DIN EN ISO 13849 standard, which is described in a new Machinery
Comments about openPR
9 o'clock: discuss press release with client, 10 o'clock: submit release to openPR, within the briefest possible time release is published and displayed in a prominent place on openPR.de. I am thrilled!
Zehra Spindler, Calypso Now! - Communication Agency