Schaltbau GmbH at SPS/IPC/DRIVES in Nuremberg 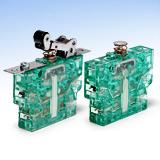 Munich, 05 August 2011: “Safety matters” – is the motto under which Schaltbau GmbH will be appearing this year at SPS/IPC/DRIVES (22 to 24 November 2011) in Nuremberg. Key exhibits include the snap-action switches of the S850 and S880 series. The decisive factor for the development of the S850 series, a double NC contact switch, was the new DIN EN ISO 13849 standard, which is described in a new Machinery Directive of the European Union. The S880 snap-action switch, a V4 switch, features a positive opening operation mechanism as per the standard IEC 60947-5-1, Appendix K. These products satisfy exacting requirements in terms of safety, they are used in railway and industrial applications, e.g. as gear-type limit switches in crane systems and wind turbines. The product range on show will be rounded off by connectors, which have been specifically designed for outdoor conditions. Further information is available directly at our stand in hall 10.409 or online by visiting www.schaltbau-gmbh.de. As a double NC contact switch, the S850 snap-action switch forms a redundant system. This is possible, since electrically isolated and mechanically linked contact bridges prevent incorrect power connection between two circuits. This means that two circuits can be switched that are on a different electrical level. These two circuits are opened synchronously, with a max. time difference of 3 milliseconds. The double NC contact switch incorporates a positive opening operation mechanism, which, within the scope of the requirements of the standard IEC 60947-5-1, Appendix K, also ensures opening after a short circuit (fail safe principle). V4 switch with positive opening operationThe S880 series, a V4 switch, is the most compact snap-action switch with positive opening operation as per IEC 60947-5-1, Appendix K. Both switches have VDE, UL and CCC approvals. Connectors for outdoorsFurther exhibits include the connectors of the DN and M1 Plus series. The DN connector is a signal connector, available as both a plastic and metal version. Sealed to IP68 and IP69K, mated and unmated, it is exceptionally resistant to high-pressure cleaning. The product range is rounded off with the connector from the M1 Plus series. The M1 Plus is a universal industrial connector. This series is used for transmitting signals as well as for supplying components and systems with current. Connectors from Schaltbau are used in exclusive markets, which, for example, involve extremely harsh environmental conditions or demanding specifications. For example, in the food industry, environmental technology, traffic engineering and in machinery construction.“Connect – Contact – Control”, is the motto under which Schaltbau GmbH develops and manufactures electromechanical components for railway equipment and industrial applications. Founded in 1929, the company has nine locations of its own and more than 50 sales partners worldwide. Subsidiaries in France, England, the USA, China, India and other countries emphasise the company’s international orientation. The product portfolio includes connectors, snap-action switches, contactors, and command and messaging devices. The company carries out development both for specific orders and for series production. Its products are distinguished by their high quality, great reliability and long lifetime. The Schaltbau GmbH quality management system is certified according to DIN EN ISO 9001, and its ecological management system according to DIN EN ISO 14001. Since 2008 the company has been certified as a Q1 Supplier for the Deutsche Bahn (German state railways). In October 2008, the Velden and Aldersbach plants were quality-certified according to IRIS (International Railway Industry Standard).Schaltbau GmbH Mrs Svenja Bierbrauer, Marketing Hollerithstr. 5 D-81829 Munich/Germany bierbrauer@schaltbau.de www.schaltbau-gmbh.de Tel.: +49 (0)89/9 30 05-153

09-19-2014 | Industry, Real Estate & Constr …
Schaltbau GmbH
Schaltbau GmbH exhibiting at InnoTrans for the tenth time
Munich, 18 August 2014: Under the motto “Customizing is Our Standard” Schaltbau GmbH will be exhibiting its innovations in railway engineering at this year’s InnoTrans in Berlin (September 23 to 26) at stand 102 in hall 2.2. Highlighted will be the new S337 Series configurable master controller, the CH1130/02 update of the CH Series high-voltage contactor, and the newly developed replacement insert for the receptacle of the UIC558 Series connector.
08-27-2013 | Industry, Real Estate & Constr …
Schaltbau GmbH
Schaltbau GmbH: groundbreaking ceremony for plant expansion
Munich, 29 July 2013: Schaltbau GmbH is expanding production capacities at its  Velden and Aldersbach plants, both located in Lower Bavaria. The company is investing a total of seven million euros in new buildings and production equipment, in order to generate additional growth with innovative Schaltbau products and bolster the job situation in the region. Schaltbau is investing in state-of-the-art production buildings at both sites. After a nine-month construction period,
08-26-2013 | Logistics & Transport
Schaltbau GmbH
Schaltbau GmbH: new high-performance charging connector for industrial trucks
Munich, 13 June 2013: The new LV-HPC (High Power Connector) charging connector made by Schaltbau meets the DIN VDE 0623-589 standards for a greater current-carrying capacity. The series is therefore suitable for state-of-the-art fast chargers such as those used with industrial trucks. A red-coded keying pin signifies operation at 120, 250 and 400 amperes for charging wet-cell batteries and serves to prevent mismating at the same time. The latest generation
05-22-2013 | Industry, Real Estate & Constr …
Schaltbau GmbH
Schaltbau GmbH snap-action switches used by Heidelberger Druckmaschinen AG
Munich, 29 April 2013: Schaltbau’s latest S970-series snap-action switches are installed in sophisticated printing machines made by Heidelberger Druckmaschinen AG. These hardwearing, highly efficient components operate as position and limit switches in the printing and coating units of state-of-the-art sheet-fed offset printing presses. The snap-action switches installed in these machines are exposed to severe conditions. Not only do they need to be resistant to aggressive chemical detergents, they also have