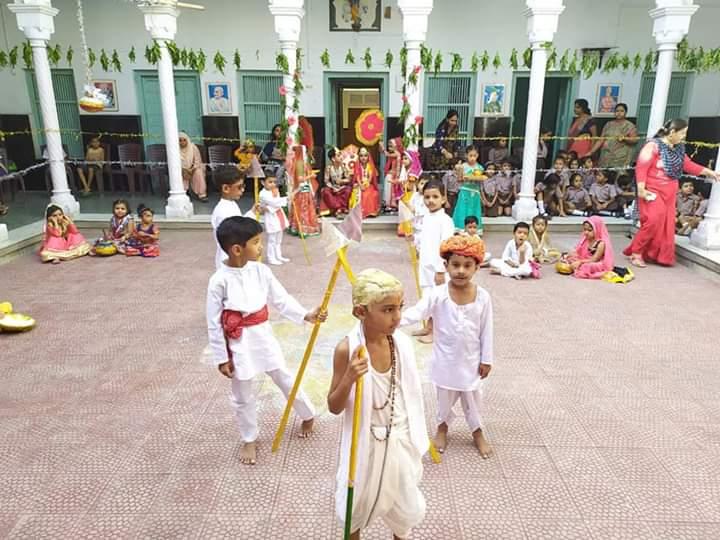 While every school in India today has many celebrations during the year, one which invariably stands top ranking in the heart and soul of all is Janmashtami. When a school celebrates different festivals spread over the year, the rich ethnic diversity of India truly comes alive. During such celebrations, the students and teachers of the school add a spectrum of colours and gaiety and indeed rise not only above caste and creed but also develop mutual respect for all religions. Smt. Jamuna Mishra Academy (JMA) established in the year 2004 is presently one of the most sought after schools at Pilani considered as Oasis in the desert state of Rajasthan well known in India today for CSIR Laboratory CEERI, L.N. Birla Naturopathy & Yoga Kendra and Birla Science Centre. It is a matter of great pride that with excellent results year after year in Board of Secondary Education Rajasthan RBSE Class X and Class 12, JMA Pilani is referred popularly as The School with 100% Results. Alumni of JMA Pilani are pursuing higher education in various institutions which include Birla Institute of Technology and Science BITS Pilani which is one of the Institutions of Eminence and Banasthali Vidyapith which is in various Quacquarelli Symonds QS Rankings.With over 700 students and 40 teachers speaking different languages belonging to different religions, JMA Pilani itself is a mini India echoing the lines of Gurudev Rabindranath Tagore in National anthem “Panjaba-Sindhu-Gujarata-Maratha Dravida-Utkala-Banga.” Janmashtami also known as Gokulashtami marks the celebration of the birth of Lord Krishna considered as one of the greatest teachers of humanity whose very name ignites the spark of the divine power in every one. Despite unexpected rains at Pilani threatening to be a dampener and an obstacle to the Goverdhan Giridhari birthday celebrations, the enthusiasm of the children ensured that the event was observed with religious fervor, gaiety and enthusiasm.City Centre Pilani on 23 Aug 2019 saw over 40 Krishnas with Radhas and Rukmanis converging at JMA in different modes of transport including the shoulders of loving mothers and fathers to usher in the Janmashtami celebrations. To highlight the power and essence of friendship, the JMA Pilani students presented episode of Krishna in his palace meeting his childhood friend Sudama to a thunderous round of applause. The school courtyard was artistically decorated with pot containing butter for the dozens of Krishnas to have a go at it. JMA President Dr Suman Mishra and Principal Mrs Booma Natarajan congratulated all students, teachers and staff for making the celebrations truly an unforgettable one. When the celebrations ended with distribution of Prasad, the students and parents of JMA left with beaming faces and pride that they were indeed part of an institution which is a shining jewel in the crown among the schools at Pilani.For more details about JMA Pilani see http://www.jmapilani.org/Default.aspxMrs Booma Natarajan, M.Sc., M.A., B.Ed. Principal, Jamuna Mishra Academy – JMA Near Old Pilani Post Office Pilani Rajasthan 333031 India Phone 91-1596-242314 Email booma_pilani at yahoo.co.in Website: http://www.jmapilani.org/Default.aspx FaceBook: https://www.facebook.com/JMAPilaniRajasthanRank1/About JMA Pilani: Jamuna Mishra Academy - JMA Pilani is a Co-educational English Medium School with Experienced Teachers, Spacious Classrooms and Modern Amenities designed to impart Quality Education combined with All Round Personality Development and lay the Best Foundation for the Child’s Future. While the school admits both boys and girls, the girl student enrollment has been steadily rising every year and is presently nearly 50% of the total strength. Right from its inception, JMA Pilani has embarked on a rich tradition of celebrating various days of national and international significance and festivals which makes it a cut above the rest schools in Pilani. The school has for boys and girls Scout and NCC, girls’ band which has been winning laurels every year. NCC cadets of JMA Pilani have also been selected for participation in Republic Day Camp RDC and Shivaji Trail Trek. Yoga, Karate, Painting and Music are not just part of school routine but a way of life for the students.

05-15-2020 | Health & Medicine
JMA Pilani Rajasthan
COVID-19 Fight Lead School JMA Pilani Rajasthan NCC Cadets Bharat Scouts Guides …
The Coronavirus induced lockdown In India today, have shaken the very foundation of the educational system and as a result, schools and colleges have been shut since mid - March with board examinations hanging in suspended animation in various states. Across the nation at large, teachers have been asked to tutor from home using online modes. Social media platforms WhatsApp Facebook, Zoom, Google Meet Hangouts etal which were slammed
05-03-2020 | Science & Education
JMA Pilani Rajasthan
COVID-19 Fight Puts Lead School JMA Pilani to organize a Virtual Sunderkand Path
Popularly known as School with 100% results in Board Exams of Class 10 and 12, Jamuna Mishra Academy JMA is well known in Pilani for carrying out many innovative activities. It is a matter of great pride that alumni of JMA Pilani are presently pursuing higher education in various institutions which include NAAC A++ accredited Banasthali Vidyapith which in Times Higher Education 'THE' is Second Best Women's University in global
04-08-2020 | Health & Medicine
JMA Pilani Rajasthan
COVID-19 Fight Lead School JMA Joins Hands with Hirlalalji ka Rasoi to Feed 1000 …
When Indian Government took decision to declare nationwide Lockdown to fight Corona Virus menace, national and international media screamed that no work will lead to no food for millions. Considering that 380 million people in India which is more than the population of USA are employed in the informal sector, the situation indeed assumes grim dimensions. According to the World Bank's 2015 estimates, India has 176 million people living
04-03-2020 | Health & Medicine
JMA Pilani Rajasthan
Lead School JMA Pilani Distributes Handmade Masks and Provisions for Pilani Unde …
The school takes inspiration from Mahabharat Bhagavad Gita Chpater 17 Verse 20 which says "datavyam iti yad danam diyate nupakarine, deshe kale cha patre cha tad danam sattvikam smritam" meaning Charity given to a worthy person simply because it is right to give, without consideration of anything in return, at the proper time and in the proper place, is stated to be in the mode of goodness. The three-fold divisions

11-30-2018 | Industry, Real Estate & Constr …
Up Market Research (UMR)
Tile Grout Market Global Forecast 2018| Studied By Mapel, Dunlop, Crafit, Bostik …
UpMarketResearch published an exclusive report on “Tile Grout market” delivering key insights and providing a competitive advantage to clients through a detailed report. The report contains 113 pages which highly exhibits on current market analysis scenario, upcoming as well as future opportunities, revenue growth, pricing and profitability. This report focuses on the Tile Grout market, especially in North America, Europe and Asia-Pacific, South America, Middle East and Africa.
11-06-2018 | Business, Economy, Finances, B …
WISE GUY RESEARCH CONSULTANTS PVT LTD
White Paperboard Market 2018 Global Analysis By Key Players – Nippon Paper, We …
White Paperboard Market 2018 Wiseguyreports.Com adds “White Paperboard Market –Market Demand, Growth, Opportunities, Analysis of Top Key Players and Forecast to 2025” To Its Research Database. Report Details: This report provides in depth study of “White Paperboard Market” using SWOT analysis i.e. Strength, Weakness, Opportunities and Threat to the organization. The White Paperboard Market report also provides an in-depth survey of key players in the market which is based on the various objectives
03-23-2018 | Leisure, Entertainment, Miscel …
Music Promotion Club
'With Me' By Krishna Frazier is Rocking the World with its Vibrant Musicality
Krishna Frazier’s latest release “With Me” has an easy-going and relaxing vibe which gets you to start your weekends the right way. This rising star from Houston, United States brings an unique blend of hip hop and rap music which is energizing as well as calming. The music as well as melody in this song is amazingly light in nature with riffs, beats and the varying ranges of audio
02-12-2018 | Business, Economy, Finances, B …
Ring Gears Market Manufacturers
Feb 12, 2018: Ring Gears Manufacturers Market Amtek Group, Krishna Transmission, …
MarketsResearch.Biz Recently added detailed market study on the "Global Ring Gears Market Research Report 2018-2025" which provides an outlook of current market value of Ring Gears Market as well as the expected forecast of Rate on Investment (ROI) with growing CAGR of XX% in Ring Gears Market by the end of 2025. The report on the global Ring Gears market uses the top-down and bottom-up approaches to define, analyze, and
11-07-2017 | Sports
JMA Pilani Rajasthan
Arjuna Award winning Olympian Padma Shri Krishna Poonia Chief Guest JMA Pilani R …
It is indeed a coincidence that both the ace athlete Chief Guest and the Institution JMA firmly drew their inspiration from the Zig Ziglar quote “You were born to win, but to be a winner; you must plan to win, prepare to win, and expect to win.” Smt. Jamuna Mishra Academy (JMA) established in the year 2004 is presently one of the most sought after schools at Pilani considered as Oasis
09-18-2017 | Politics, Law & Society
Newspatrolling
Upset Hindus urge Alibaba to apologize & withdraw Krishna-Ganesha doormats
NewsPatrolling.com/Glamourtreat.com ; Upset Hindus are urging Hangzhou (China) headquartered e-commerce giant Alibaba Group for immediate withdrawal from its website of doormats carrying images of Hindu deities Lord Krishna and Lord Ganesha; calling it highly inappropriate. Distinguished Hindu statesman Rajan Zed, in a statement in Nevada (USA) today, said that it was shocking to visualize that Alibaba, for its mercantile greed, was apparently persuading the world to scrub/wipe the soles of
Comments about openPR
We publish our press releases on openPR.de because we like people who are "open" - just like us.
Frank Obels, CEO, INCONET - Informationssysteme, Communication und Netzwerkberatung GmbH