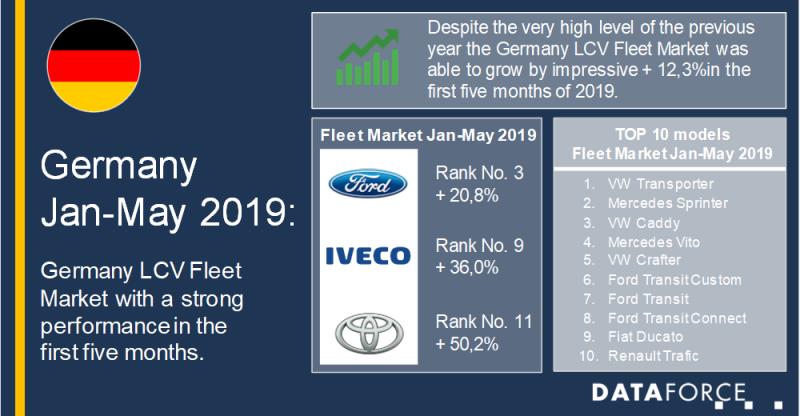 Definition and development of the registration figures Since 2001, Dataforce has worked on providing the best clarity for the LCV market in Germany. The LCV market has two elements: registrations of commercial vehicles up to a weight of 7 tons as well as passenger car registrations of typical LCV models such as VW Caddy, Citroën Berlingo or Fiat Ducato. There were two further additions at the beginning of this year: on the one hand, the (permanent) integration of the Mercedes V-Class, and on the other hand, the inclusion of the European vehicle class M3. These are vehicles for passenger transport with more than eight seats and are between 5-7 tons in; typically smaller buses, which are used for example for airport transfers.Let’s leave definitions and have a look at the current numbers. With nearly 245,000 new registrations, the LCV Fleet Market reached a new record last year. So it was of course a big question whether a further increase would be possible in 2019 given the very high level from the previous year? Well after the first five months the answer seems to be a yes as there has been an impressive growth of 12.3%. And so it is not surprising that nine of the top 10 brands were able to increase their registration volume compared to the period of January to May 2018. Only Renault were slightly down, cumulatively at -2.5%, but after a difficult first quarter, in April and May the French brand gained its highest market share since October 2017. Even though there were no position changes in the top 10 brand ranking compared to the previous year, the volume growth varied considerably. The most notable one was achieved by Iveco in ninth place, with an increase of 36.0%.Ford (ranked third behind VW and Mercedes) was also able to increase its volume significantly with a plus of 20.8% and this was further reflected in the model ranking. Following the Volkswagen Transporter, Mercedes Sprinter, Volkswagen Caddy, Mercedes Vito and Volkswagen Crafter, which all remained unchanged in the top five positions, there was a trio of Ford models: Transit Custom, Transit and Transit Connect, all of which were able to make significant gains. Fiat Ducato (again the undisputed number 1 in the segment of motorhomes) and Renault Trafic completed the group of the ten models with the highest registrations. Outside this group, the Iveco Daily and the group of car derived vans, in particular Citroen Berlingo, Opel Combo and Fiat Doblo also managed to shine.Alternative fuel types are progressing………slightly The shift from diesel to petrol engines and/or alternative fuel types we see from the passenger car market is not (yet) visible in the LCV Fleet Market. On the contrary: the traditionally very high diesel share even increased further. Between January and May 91.4% of all newly registered LCV were equipped with a diesel powertrain (previous year: 90.4%). This was at the expense of gasoline engines, whose share fell from 7.4% to 6.2%. Alternative fuels stagnated with a share „increase" from 2.2% to 2.3%. But here, too, a look at the brands and models leads to interesting results: at Nissan, for example, almost one out of four new registrations of the NV200 is its electric version. (539 words; 3,212 characters)Publication by indication of source (DATAFORCE) and author (as listed below) onlyMichael Gergen Dataforce Verlagsgesellschaft für Business Informationen mbH Hamburger Allee 14 60486 Frankfurt am Main GermanyPhone: +49 69 95930-231 Fax: +49 69 95930-333 Email: michael.gergen@dataforce.de www.dataforce.deDATAFORCE – Focus on Fleets Dataforce is the leading provider of fleet market data and automotive intelligence solutions in Europe. In addition, the company also provides detailed information on sales opportunities for the automotive industry, together with a wide portfolio of information based on primary market research and consulting services. The company is based in Frankfurt, Germany.