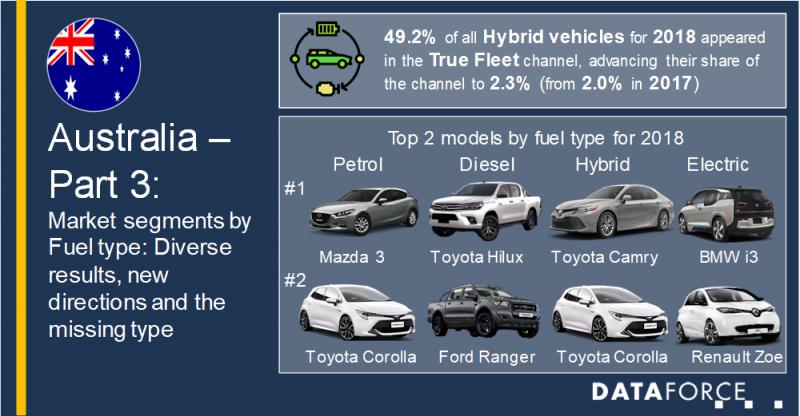 For Part 3 of our Australian report series we wanted to add a further dimension to the fuel type trends: Market Segments. Again, we saw some interesting evolution and a pretty diverse set of results across the different channels from 2014 to 2018.Market Segments/Sales Channel What about the market segments/sales channels? Well, we have some fluctuation for this before we even delve into the fuel type splits. As we mentioned in Part 1, we have seen a distinct growth in the True Fleet channel since 2014 which has grown 10.2% comparing 2014 to 2018. (2.1 percentage points in terms of share). We have also seen upward pressure in the Dealer/Manufacturer channel moving from a 12.6% share in 2014 to 16.4% in 2018.Now this is possibly the result of aggressive sales targets from OEMs trying to wrestle a larger share, but it brings with it the prevalence of high demo/cyber cars, as dealers capitalise on manufacturer bonuses for the sake of margin, before moving the inventory from their used yards as very low kilometre demos.For comparison in Europe it is Germany where we see the highest number of dealer registrations, with an average 19.9% of all registrations since 2014 being made in this channel. However, while VW, Audi, Mercedes have certainly increased in volume for the Australian market place it is Hyundai and Kia in terms of growth which have taken the lead in this channel.The share of RAC/Short-Term Rental has also grown by around 1.8 percentage points since 2014 meaning that the Private Market place has had to suffer a loss. Now, given we are talking about new vehicles here and the already mentioned prevalence of demo cars, it is not hard to imagine that more consumers are then just opting for a lower price vehicle even without as much warranty as a new car.These vehicles have already taken the first depreciation hit when it drives off the lots or is registered. And for the warranty conscious it is perhaps then not too surprising to see Hyundai and Kia as the growers, given they offer the longest warranties (5 years & 7 years respectively).Fuel type by Market Segment/Sales Channel We certainly see some interesting trends emerging in the fuel types for each of the market segments:Privates: The most stable of these has been the Private Market where Petrol has held between 73% – 75% of the channel since 2014, while Diesel has taken a drop of 1.5 percentage points to stand at 24.0% at the end of 2018. The winner of the Diesel drop is Hybrid, which has picked up around 0.4 percentage points since 2014 taking it to 1% of the share in 2018. This is certainly a move in the right direction but for a country of Australian standing only a little over 5,000 Hybrids for private customers in 2018 again highlights the Governments poor support of Alternative fuels.True Fleets: This channel has shown a divergence between 2014 and 2018 with Petrol being the fuel type of choice until 2017 where Diesel took the crown and since then the gap has continued to grow. In 2018, Diesel accounted for a 52.7% share, or a little under 180,000 vehicles up from 138,000 in 2014. Comparing the market segments, Hybrids were strongest in True Fleets, taking a 2.3% share of the channel for 2018 which equates to 49.2% of all Hybrid vehicles for 2018.RAC/Short term rentals: The channel has also seen some changes happening in the fuel type mix. Petrol has and continues to be the preferred choice at present and as the channel keeps growing so does Petrol finishing with around 64,000 vehicles in 2018, but it does seem that Diesel is certainly in the ascension. It has moved from 7.2% in 2014 to 15.8% in 2018. Surprisingly, Hybrids have been on a rollercoaster ride in this channel: in 2014 they accounted for around 1.0% share, moving to 1.6% in 2016 before sliding back to 0.6% for 2017 and up again to 1.0% for 2018. Is it that the renters are fickle on Hybrid cars during the lows or that as a tactical channel the consumer appetite (from the retail channels) were not quite there, thus generating some of the highs?Dealer/Manufacturer: As you can possibly guess the fuel type split here is pretty much a mixture of Private & True Fleets, but even though this is the first choice tactical channel, helping to cushion a shortfall or deliver a number #1 result for marketing, it is still interesting and home to some 182,000 new vehicles in 2018. Both Diesel and Petrol have grown in absolute volume from 2014 to 2018 but while Petrol has continued to climb, Diesel engines peaked in 2016 at around 60,000 and fell back to 55,000 by 2018.(802 words; 4,560 characters)Publication by indication of source (DATAFORCE) and author (as listed below) onlyDATAFORCE – Focus on Fleets Dataforce is the leading provider of fleet market data and automotive intelligence solutions in Europe. In addition, the company also provides detailed information on sales opportunities for the automotive industry, together with a wide portfolio of information based on primary market research and consulting services. The company is based in Frankfurt, Germany.Richard Worrow Dataforce Verlagsgesellschaft für Business Informationen mbH Hamburger Allee 14 60486 Frankfurt am Main GermanyPhone: +49 69 95930-253 Fax: +49 69 95930-333 Email: richard.worrow@dataforce.de www.dataforce.de

You can edit or delete your press release Australia’s Market segments by fuel type: diverse results, new directions and the missing type here