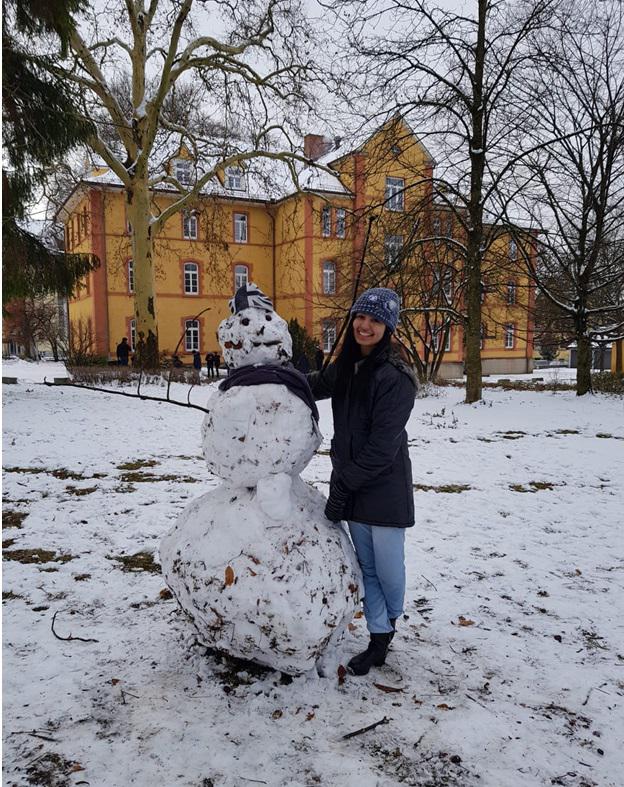 It is indeed a matter of great pride that Banasthali has fostered healthy collaboration with several universities abroad to facilitate exchange programs. The student who goes from Banasthali not only goes as an ambassador of her Alma mater but also of motherland India carrying the pride, values and ethos.For the purpose of fostering Student Exchange, Curriculum Design & Development Support, Faculty Exchange, Programme Exchange, Dual Degree Programme etc, Banasthali has been collaborating and signing Memorandum of Understanding (MoU) with various institutions across the globe which include Waterford Institute of Technology, Ireland; Fachhochschule KufsteinTirol, Austria; Fachhochschule Vorarlberg, Austria; Gazi University, Turkey; Savonia Polytechnic, Finland; Sciences Po Toulouse, France; Academy of Professional Studies, London; The Global Village University, Ghana; Murdoch University, Australia; Kantonsschule Solothuria, Switzerland; Lord Buddha Education Foundation, Nepal; Teachers Training College, Weingarten, Germany; Teachers Training College, Schwaebisch Gmuend, Germany; Ubon Rajathanee University, Thailand; Lincoln College, Malaysia; Concordia University, Canada; University of Applied Sciences, Ravensburg, Weingarten, Germany; Mendel University, Czech Republic; University of Murcia, Spain; University of Warsaw, Poland; University of Saskatchewan, Canada; Curtin University, Australia; Epita University, France; American University of Central Asia, Kyrgyzstan; Universitas Sumatera Utara, Indonesia; International University of Kyrgyzstan, Kyrgyzstan and University of Northern Michigan, USA. In addition, Banasthali has been a partner under the Erasmus Mundus Action-2 Inter-disciplinary Bridges between Indo-European Studies (IBIES) Programme, which has 6 European Universities and 12 Indian Universities as its members. Prof Hamsavahini Singh who is famous for her bicycle tour of the world teaches German which is one of the most sought after foreign language course at Banasthali campus by students and coordinates all the student exchange activities with various institutions in Germany. She is also Professor incharge for “Das Epochfest “ which is one of the most popular festivals in Banasthali campus. Ms Deepali Kataria who is from Jaspur Uttarakhand took admission to Banastahli in July 2015 for pursuing BTech Chemical Engineering. Her cousin also had been a Banasthalite who did several German Certificate courses offered in the campus and went to Germany for a sojourn. Inspired by her cousin, in addition to her chemical engineering courses, Deepali registered for the German language courses ranging from Certificate to Diploma to Advanced Diploma in different semesters. Her outstanding performance in various German courses by Mar 2018 fetched her not only a Gold Medal but also the coveted Baden-Württemberg Scholarship to pursue a semester from 01 October 2018 to 15 January 2019 at over seven decades old University of Education Weingarten Germany. The matrix structure introduced in 2005 at Weingarten University of Education underlines the interdisciplinary orientation in teaching and research. Starting in 2006, the College of Vocational School Weingarten began to expand its offer of scientific study programs for further education professions in addition to the teacher training courses. PH Weingarten offers a broad spectrum of study opportunities with 10 Bachelor's programs and 10 Master's programs outside the teaching profession.During her stay, Deepali took 11 courses in the host University and a training at Talschule in which she attended the classes of Grade 3 kids and gave the presentation about India and various festivals. Interacting with the kids in German really improved her language skills many fold. The city tours, welcome evenings, weekend trips to the cities in Baden-Württemberg Area like Friedrichshafen, Lindau, Überlingen and Konstanz, one day trip to St.Gallen, Switzerland and 3 countries tour to Werdenberg Castle in Switzerland, Vaduz in Liechtenstein and Feldkirch in Austria made Deepali’s sojourn truly unforgettable. The chilling weather, Christmas markets with the warm fragrance of Glühwein, fleamarkets, baking cookies and snowfall were cherry on the top.To quote Deepali about the sojourn “My stay in Germany feels like a dream. It is hard to recollect the experience as a whole. I feel as my experience was so surreal, breathtaking and life changing that I can’t exactly sit down and absorb it all at once. The hospitality of the host University and support of International office exceeded the expectations. They went out of their way to ensure that all the International students experienced the German way of life, including culture, language and cuisine. By the end, I realized that this exchange program had helped me grow as a person, to become more independent.” Deepali who is graduating in May 2019 is proud that she was indeed part of an institution which is a jewel in the crown among the women’s universities not only in India today but across the globe.For more details about Banasthali see http://www.banasthali.org/About Banasthali: Established in 1935, the Institution which is also the largest fully residential women’s university in the world has played a big role in revolutionizing women’s education and empowerment in India for the last eight decades. Banasthali has scripted numerous success stories in a wide range of fields, and stands tall among the citadels of learning in India today. Proud to be Banasthali alumni who call themselves as Banasthalites can be found in all latitudes, longitudes and altitudes in all walks of life across the globe. Banasthali has the pride of being chosen as a Faculty Development Centre under the MHRD Govt of India Pandit Madan Mohan Malaviya National Mission on Teachers and Teaching (PMMMNMTT) as well as for hosting Atal Incubation Centre (AIC) by NITI Aayog Apart from various National Rankings which include India Today #2, FICCI University of the year 2015, NAAC A grade, MHRD NIRF 29, in recent past, Banasthali has been in national and international media attention for getting Quacquarelli Symonds QS Asia University Ranking, QS BRICS Ranking, Diamond status under QS i-Gauge Indian University Rating and the overall Four Star Ranking in - QS Stars Rated for Excellence with 5 Stars for each for Teaching, Employability, Facilities, Arts & Culture and Inclusiveness.Banasthali Vidyapith Banasthali Rajasthan – 304022 Phone 91 1438 228456 / 228341 Email: info@banasthali.ac.in Website: http://www.banasthali.org Facebook: www.facebook.com/Banasthali.org

02-01-2019 | Science & Education
KLE Technological University
KLE Technological University partners with Coventry University, UK
KLE Tech, in its endeavour to create better learning environments to students and giving them multi-cultural exposure, has entered into a MoU with Coventry University (www.coventry.ac.in), one of the leading universities of United Kingdom. Prof.Ashok Shettar, Vice Chancellor signed the MoU with Prof.Richard Dashwood, Deputy Vice-Chancellor (Research) of Coventry University on October 08, 2018. As per this MoU, both Universities would be collaboratively working in the areas of research, faculty development
09-12-2018 | Science & Education
Qy Research Groups
Nursing Education: Market 2018 Global Analysis By Top Key Players – Duke Unive …
An exclusive Nursing Education market research report created through broad primary research (inputs from industry experts, companies, and stakeholders) and secondary research, the report aims to present the analysis of Global Nursing Education Market By Type, By Application, By Region - North America, Europe, South America, Asia-Pacific, Middle East and Africa. The report intends to provide cutting-edge market intelligence and help decision makers take sound investment evaluation. Besides, the report
03-26-2018 | Business, Economy, Finances, B …
ReportsWeb
Medical Education Market by Top Manufacturers with Production Harvard University …
In medical education, physical examination is an essential element of learning to provide students with a hands-on experience and enable them to learn accurate clinical diagnosis. However, medical education requires a high level of self-regulated learning. Owing to the extensive preclinical education involved, students find it challenging to memorize and retain knowledge pertaining to clinical study material. In addition, many of the universities also have limited teaching resources. Despite these
08-04-2016 | Science & Education
EdProcure
Beginning the search for a University - University Open Days
So you have decided you want to go to University – great start! So, where to begin? Your first port of call when looking into the minefield of universities is to go and look around some – all universities in the UK hold specific University Open Days, giving you the chance to visit the buildings, the city, the lecture theatres, the sports facilities, and perhaps meet some of
04-30-2012 | Energy & Environment
EnOcean GmbH
EnOcean starts new University Programme
Promoting the use of energy harvesting wireless technology in education and offering career opportunities for young engineers Oberhaching/Munich, Germany, April 26, 2012 — EnOcean has launched a new university programme. This initiative will educate the university community about energy harvesting wireless technology and open up students’ career opportunities at EnOcean. The programme addresses Electronics, Software or Computer Engineering, Mechanical Engineering, and other related courses. A key element of the
02-29-2012 | Science & Education
http://iau.edu.lc/
International American University College of Medicine partners with Walden Unive …
Dallas, Texas - February 28, 2012 – The International American University College of Medicine (IAUCOM), Saint Lucia and Walden University, USA have entered into a partnership to provide medical students with an opportunity to acquire dual degrees. According to the agreement, the medical students will now be able to enroll for MBA in Healthcare Management, Master of Healthcare Administration (MHA) or Master of Public Health (MPH) alongside their regular MD
Comments about openPR
OpenPR is clearly structured and remains true to its principle of confining itself to the essential parts. OpenPR has proven to be a very good and reliable partner to our media agency: Within the shortest time the releases are online and go down well with the media representatives. The success of OpenPR is reflected in the steadily increasing number of press releases. It is good that OpenPR exists!
Ursula Koslik, Director Marketing & PR, F+W Hamburg