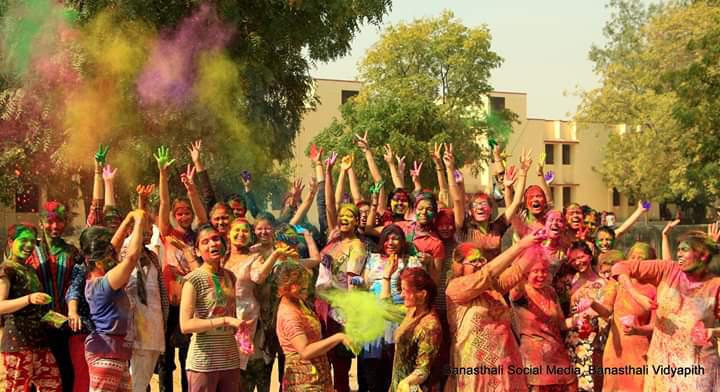 If Holi celebration at Tagore’s Shantiniketan Bengal is scintillating, for sure at Gandhi Niketan Banasthali Rajasthan, it is dazzling. With 16000 students coming from different parts of India, the 850 acre Banasthali campus itself is a mini India echoing the lines of Gurudev Rabindranath Tagore in National anthem “Panjaba-Sindhu-Gujarata-Maratha Dravida-Utkala-Banga.” Appreciated by the world at large, Banasthali firmly believes that to be top ranking, it is the foremost responsibility of any Indian educational institution to nurture humans with the tolerant and harmonious view of life as envisaged in the Indian culture the spirit of which has been beautifully captured in the Indian Constitution by the founding fathers of the nation. The rich ethnic diversity of India truly comes alive when the campus celebrates Hariyali Teej, Janmasthami, Ganesh Chaturthi, Navratra Dandiya & Garba, Durgasthami, Dusshera, Diwali, Guru Nanak Jayanti, Eid al Fitr, Christmas, Lohri, Basant Panchami and Holi. During these celebrations, the students and faculty of Banasthali add a spectrum of colours and gaiety to campus life and indeed rise above caste and creed and develop mutual respect for all religions. Holi undoubtedly is indeed a festival of multiple significances – mythological, cultural, social and biological. With Supermoon and spring equinox coinciding, Holi celebrations at Banasthali started on 20 Mar 2019 late evening with the burning of Holika in front of Saraswati Mandir and Vani Mandir. This year the Banasthalites were hyper charged as the periodical examinations had just finished and the girls were all ready to let go of the exam heat with the colors of Holi. To set the mood right, the Banasthali orchestra played some classic Holi tunes.At sunrise on 21 May 2019, even the notoriously late sleepers in the hostels were up early to grab the breakfast and were all geared up with loads of colours in front of the respective hostels. With the hostel warden keeping the eyes sharper doing the customary wishes in the public address system, the riot of vibrant colours erupted with shouting of ‘Bura na Mano Holi Hai’. It is remarkable that students were particular in choosing environment friendly colours and avoided spraying water. Everybody becomes every others friends when it comes to colour play. With the favorite songs played in the music system, the dancing goes frenzy. The staff quarters also holi is played with full enthusiasm. The menu in the mess for Holi typically includes munching Matris, sweety gujiyas, puris, rajma chawal, dahi vadas, and cracky khakhras.According to Varnika Singh third year BTech Chemical student, Banasthali Holi is truly unforgeetable. Her batch mate Pragati Sharma said several Banasthali alumni who had passed out two decades ago, egged by the memories had come all the way to Banasthali to join the holi celebrations this year and wowed to do the same few years from now. To quote Aditi Agrawal second year BTech Chemical student, no other university campus oill ever come close to the holi celebration spirit of Banasthali campus. It is for sure that the students and faculty celebrated Holi with beaming faces and pride that they were indeed part of a top ranking institution which is a jewel in the crown among the women's universities not only in India today but across the globe.For more details about Banasthali see http://www.banasthali.org/About Banasthali: Established in 1935, the Institution which is also the largest fully residential women’s university in the world has played a big role in revolutionizing women’s education and empowerment in India for the last eight decades. Banasthali has scripted numerous success stories in a wide range of fields, and stands tall among the citadels of learning in India today. Proud to be Banasthali alumni who call themselves as Banasthalites can be found in all latitudes, longitudes and altitudes in all walks of life across the globe. Banasthali has the pride of being chosen as a Faculty Development Centre under the MHRD Govt of India Pandit Madan Mohan Malaviya National Mission on Teachers and Teaching (PMMMNMTT) as well as for hosting Atal Incubation Centre (AIC) by NITI Aayog Apart from various National Rankings which include India Today #2, FICCI University of the year 2015, NAAC A grade, MHRD NIRF 29, in recent past, Banasthali has been in national and international media attention for getting Quacquarelli Symonds QS Asia University Ranking, QS BRICS Ranking, Diamond status under QS i-Gauge Indian University Rating and the overall Four Star Ranking in - QS Stars Rated for Excellence with 5 Stars for each for Teaching, Employability, Facilities, Arts & Culture and Inclusiveness.Banasthali Vidyapith Banasthali Rajasthan – 304022 Phone 91 1438 228456 / 228341 Email: info@banasthali.ac.in Website: http://www.banasthali.org Facebook: www.facebook.com/Banasthali.org

04-24-2019 | IT, New Media & Software
Hexaview Technologies Inc.
Yeh its Holi : Fun-Filled Festival
As the country celebrated one of it's favourite and most-awaited festival, the Festival all about fun, frolic, vibrant and beautiful colours that celebrates the victory of good over evil and the arrival of spring and harvests to come. Yes, you guessed it right, it was Hexaview's 2019 HOLI celebration. And what is a better way than sharing this joyful festival with your colleagues turned family? Not thanking enough our HR
03-06-2018 | IT, New Media & Software
Algoworks
Algoworks Celebrates Holi 2018
Algoworks witnessed a colorful and fun-filled celebration this Holi, as “Algoworks Superstars” was back with season 2. Holi, the festival of ‘colors’ is celebrated loudly across where people play with colors and enjoy festive delicacies like gujiya, thandai, sweets, and more. Algoworks’ office was decked up with pretty decorations, and the floral fragrance of ‘gulaal’ lingered in the air. Employees were seen passionately rehearsing for their acts and performances for
02-15-2018 | Fashion, Lifestyle, Trends
Mynaa Tech Services Pvt Ltd
Indiagift.in is All Set To Make Holi Blissful With Brand New Holi Gifts Collecti …
With Valentine's Day behind us, the next big celebration of the year for us Indians is Holi! Armed with Holi colours and pichkari- water guns filled with coloured water, every year, we look forward to this festival of colours with much enthusiasm. This year, try something different with Holi Gifts and make this occasion a memorable one for life with personalised gifts and fresh, homemade sweets packages for your loved
03-17-2017 | IT, New Media & Software
Algoworks
Celebrating the festival of colors - Holi 2017
Algoworks arranged a grand celebration on this pious day. An event called “Algoworks Superstars” was organized by the event management team “Spasso”, which gave a chance to employees to showcase any talent that they had within them. Holi, the festival of colors, and one of the major festivals of India was celebrated nationwide on 13th March 2017. The occasion is known to be one of the most energetic and vivacious
03-15-2016 | Advertising, Media Consulting, …
Elite Handicrafts
Elitehandicrafts.com is All Set to Make Holi Blissful with Its Brand New Holi Co …
Holi is the celebration of love and togetherness. Keeping in account the needs and deeds of holi celebration Elite Handicrafts presents its mesmerizing and extremely delightful collection for Holi 2016. New Delhi: India is a place well known for its ethics, culture and tradition. Each and every festival that is being observed in the country is filled with gusto and amongst all festival a moment well known for joy and
03-02-2016 | Arts & Culture
http://www.artzyme.com/contests/
ARTZYME-HOLI HAI-PAINTING CONTEST
Artzyme Holi Painting Contest Event Date: 21/02/2016 to 20/03/2016 To promote Arts and Culture based on ‘Make in India’ program, for the First time we announce Artzyme Holi Painting Contest. ‘Artzyme’ has taken colorful festival of Holi as theme of contest. Holi is celebrated across India in different forms and themes, for various reasons. We are open to all creative minds to showcase their ideas, reasons and perception of this colorful festival by
Comments about openPR
OpenPR ist the nicest and most clearly laid out PR platform I have seen to this day. The press releases are displayed very nicely and clearly and without any unnecessary frills. The updates are fast and the finished release looks appealing and is clearly legible. Even with 16 years of experience one discovers new things from time to time. Congratulations!
Gabriele Ketterl, Director Marketing & PR, Menads