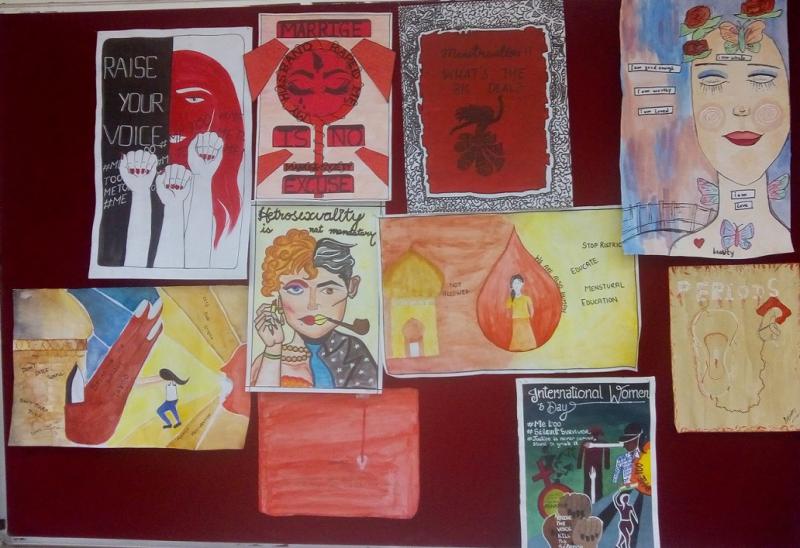 The United Nations theme for this year is Think Equal Build Smart Innovate for Change. It is known that innovation and technology provide unprecedented opportunities, yet trends indicate a growing gender digital divide and women are under represented in the field of science, technology, engineering, mathematics and design. It prevents them from developing and influencing gender - responsive innovations to achieve transformative gains for society.The Women’s Studies and Research Centre at Banasthali for which the Coordinator is Prof Manju Singh is indeed a hub of activities all round the year. The IWD celebration is aptly named Jagriti meaning Awakening. The proceedings started with welcome address by Sri Mohammad Tarique Iqbal followed by lighting of auspicious lamp on 08 Mar 2019 at Vani Mandir Banasthali by Prof Preeti Sharma Dean and other dignitaries. The competitions conducted included on the spot Poster making with theme “Me too”, "Period – a Taboo?”, “Transgender and mainstream society” and “Women and Patriarchal laws”. The Nukkad Natak (Street Play) also had the same themes as poster making. On 09 Mar 2019, the high voltage dramatic debate in Hindi as well as English picked on Goddess Sita, Princess Razia Sultan, Rani Lakshmi Bai and Nightingale of India Sarojini Naidu. Open Mic poetry had several hard hitting presentations on issues concerning women. Prof BR Natarajan regaled the audience with a few thought provoking poetic lines in Hindi and Prof Manju Singh proposed vote of thanks. On 10 Mar 2019, team Jagriti had an interactive session with the rural women at Anaupcharik Mahila Shiksha Kendra. The students and faculty who participated in Jagriti 2019 at Banasthali left with beaming faces and pride that they were indeed part of an institution which is a jewel in the crown among the women’s universities not only in India today but across the globe.For more details about Banasthali see http://www.banasthali.org/About Banasthali: Established in 1935, the Institution which is also the largest fully residential women’s university in the world has played a big role in revolutionizing women’s education and empowerment in India for the last eight decades. Banasthali has scripted numerous success stories in a wide range of fields, and stands tall among the citadels of learning in India today. Proud to be Banasthali alumni who call themselves as Banasthalites can be found in all latitudes, longitudes and altitudes in all walks of life across the globe. Banasthali has the pride of being chosen as a Faculty Development Centre under the MHRD Govt of India Pandit Madan Mohan Malaviya National Mission on Teachers and Teaching (PMMMNMTT) as well as for hosting Atal Incubation Centre (AIC) by NITI Aayog Apart from various National Rankings which include India Today #2, FICCI University of the year 2015, NAAC A grade, MHRD NIRF 29, in recent past, Banasthali has been in national and international media attention for getting Quacquarelli Symonds QS Asia University Ranking, QS BRICS Ranking, Diamond status under QS i-Gauge Indian University Rating and the overall Four Star Ranking in - QS Stars Rated for Excellence with 5 Stars for each for Teaching, Employability, Facilities, Arts & Culture and Inclusiveness.Banasthali Vidyapith Banasthali Rajasthan – 304022 Phone 91 1438 228456 / 228341 Email: info@banasthali.ac.in Website: http://www.banasthali.org Facebook: www.facebook.com/Banasthali.org

03-08-2018 | Politics, Law & Society
Banasthali
Jagriti 2018 – IWD International Women’s Day Celebrations at Banasthali Worl …
The United Nations Theme for this year IWD is “The Time is Now: Rural and urban activists transforming women’s lives” and the message from Secretary-General, Antonio Guterres is “Achieving gender equality and empowering women and girls is the unfinished business of our time, and the greatest human rights challenge in our world." International Women’s Day 2018 is an opportunity to transform this momentum into action, to empower women in all settings,
09-20-2013 | Arts & Culture
Sublime Galleria
The Sublime Galleria - A Plethora of Artists and Creative Ventures
India’s first Sky Gallery, Sublime Galleria is a dynamic meeting ground for upcoming artists, art connoisseurs and buyers. Founded in 2009, Sublime is a renowned platform for the promotion of diversity and innovation in art. Bangalore, India, September 20, 2013 -- The Sublime Galleria is a dynamic meeting ground for upcoming artists, art connoisseurs, and buyers. It is India’s first Sky Gallery, and was founded in 2009 by Ms. Uzma Irfan,
Comments about openPR
OpenPR ist the nicest and most clearly laid out PR platform I have seen to this day. The press releases are displayed very nicely and clearly and without any unnecessary frills. The updates are fast and the finished release looks appealing and is clearly legible. Even with 16 years of experience one discovers new things from time to time. Congratulations!
Gabriele Ketterl, Director Marketing & PR, Menads