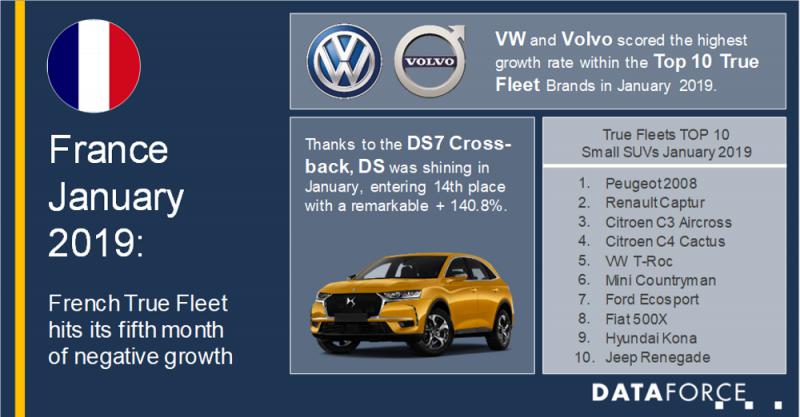 With slightly over 155,000 registrations the French passenger car market started the new year with a minor loss of 1.1%. While the Private Market missed its volume from last year’s January by less than 300 registrations (-0.3%) the fleet market was down by 2.5%. However, this result is far from being disastrous, as it was less of a volume loss than seen in the last four months. Also, worth noting is that January 2018 was the best first month of a year ever for the French True Fleets and therefore a tough challenge given the current climate. For Special Channels we saw a mixed picture with a growth of 13.0% for Dealerships/Manufacturer registrations and a reduction of the Short-Term Rental volume by remarkable 22.7%.Brand performance The two market leaders Peugeot and Renault kept their positions but suffered a decline of -8.5% and -13.8% respectively. Citroen (+11.9%) kept rank number three with its highest market share since July 2017. Volkswagen stayed on rank number four but scored an impressive +38.7%. The biggest push within the German manufacturers model ranks came from Polo and the new T-Roc which was positioned fifth in the SUV Small segment and was the best non-French model.BMW in fifth place achieved a double-digit growth of 12.9% and gained one position as well as Toyota (6th, +2.1%), Audi (7th, -5.4%) and Mercedes (8th, +2.3%), while Ford dropped back into ninth position. Ford’s registrations almost collapsed with a minus of 36.4% over January 2018. Volvo completed the top ten with a remarkable +21.6%.Thanks to the DS7 Crossback, DS more than doubled its registrations and jumped from rank 17th into 14th. While the Peugeot 5008 is dominating the Medium SUV class the DS7 is already number two. A bit further down the ranking we saw a very good performance from a Korean manufacturer: thanks to the Kona, with additional support from the Tucson, i20 and i30, Hyundai achieved its best market share in True Fleets since November 2015.Small SUV performance The Hyundai Kona mentioned above was only one out of several Small SUV with a huge improvement in January. No less than 13 out of the top 15 models in the segment increased their volume compared to January 2018; six of them even by a three-digit percentage. Overall there was no other vehicle class with a higher growth by absolute figures. The segment was up by +39.3% and with a share of 10.4% it achieved a new record in the French fleet market.Fuel type performance January showed extraordinary results in terms of fuel type shares. While the Diesel fell to a new low point with 61.8%, the one for company cars equipped with a petrol powertrain peaked out with 31.0%. Meanwhile Alternative fuel types only achieved a small improvement compared to the average share for 2018. And although Private customers and company car drivers are pretty different target groups in many perspectives, this (fuel type) trend is identical and we had an all-time high for Petrol and an all-time low for Diesel in the Private Market for January as well.(525 words; 3,040 characters)Publication by indication of source (DATAFORCE) and author (as listed below) onlyDATAFORCE – Focus on Fleets Dataforce is the leading provider of fleet market data and automotive intelligence solutions in Europe. In addition, the company also provides detailed information on sales opportunities for the automotive industry, together with a wide portfolio of information based on primary market research and consulting services. The company is based in Frankfurt, Germany.Michael Gergen Dataforce Verlagsgesellschaft für Business Informationen mbH Hamburger Allee 14 60486 Frankfurt am Main GermanyPhone: +49 69 95930-231 Fax: +49 69 95930-333 Email: michael.gergen@dataforce.de www.dataforce.de

12-05-2018 | Fashion, Lifestyle, Trends
Knicker Locker
Knicker Locker's Big January Sale
Knicker Locker will be having some fantastic online offers starting from the 1st January 2019. As part of our January sale, we will have up to 40% off seasonal lingerie including brands, Huit, Freya and Wacoal. This includes camisoles, basques, mastectomy bras and sports bras. We will also be offering a clearance sale with up to 50% off all our gorgeous nightwear collection and even up to 40% off designer swimwear just
01-16-2017 | IT, New Media & Software
MMD
Four ways to rescue January
Amsterdam, 16 January 2017 – Of all the months of the year, January has precious little going for it. Holiday festivities are over, the tree has been taken down and the glitter swept away, and ahead are freezing-cold, dark weeks seriously lacking in sparkle. If hibernating until spring isn’t an option, the alternative is to find ways to enjoy it. MMD, a leading technology company and brand license partner for
02-02-2012 | Industry, Real Estate & Constr …
What House?
UK House Prices Drop in January
House prices dropped by 0.2 per cent in January according to Nationwide’s latest house price index. The average house price is £162,228 and the decrease in property prices follows the second monthly fall in a row after a 0.2% fall was recorded in December 2011. However house prices remain 0.6% higher than they did a year ago. Possible lessening numbers of homes coming onto market means prices are likely to drop
02-16-2011 | Tourism, Cars, Traffic
Phuket Ocean Villas Co. Ltd.
Wettest January on record in Phuket, Thailand
Phuket, Thailand: Figures released by the Phuket Meteorological Department, based at Phuket International Airport, have reported a record 77 millimeters of rainfall during January 2011. January is usually one of the driest months of the year in Phuket, Thailand but this year’s numbers show that more than twice as much rain fell than the Island’s monthly average of 35.9 millimetres. One researcher at the Phuket International Airport monitoring station attributed the
01-14-2011 | Arts & Culture
WWA gallery
SuperKickAss opens Friday, January 21st 7-10pm
A Super Kick Ass show with five artists: Dee Chavez, David Chung, Edward Robin Coronel, Tracy Tomko, and Jeni Yang Opening Reception: Friday, January 21st, 2011 from 7-10pm On View: January 21st, 2011 – February 19th, 2011 This January 21st, WWA gallery and Industrial Squid kick off a year that will be chocked full of mind melting awesomeness with a show that can be only described as SuperKickAss. Featuring the works of Dee Chavez, The
01-29-2008 | Industry, Real Estate & Constr …
TheMoveChannel
TheMoveChannel.com's Investment Property Watch - January 2008
Prime real estate in emerging locations was the flavor of the month in December on TheMoveChannel.com, with some unusual destinations dominating the top 10 list of investment properties on the site. December’s top ten makes interesting reading, as it shows that prospective investors are fearlessly ignoring established markets like France and Spain, broadening their horizons and scouring far flung destinations for their next big property investment. With Bulgaria’s newly anointed position as
Comments about openPR
9 o'clock: discuss press release with client, 10 o'clock: submit release to openPR, within the briefest possible time release is published and displayed in a prominent place on openPR.de. I am thrilled!
Zehra Spindler, Calypso Now! - Communication Agency