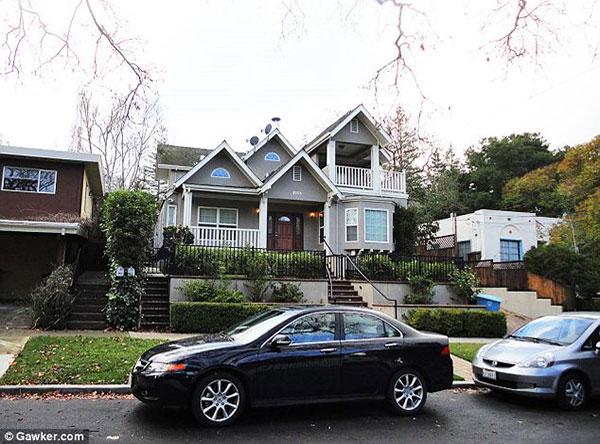 Facebook creator and CEO Mark Zuckerberg moved to a new home this week, but only a few blocks away from his old one.In a move out of character, Zuckerberg, who is well known for staying away from the limelight, invited talk show host Oprah Winfrey inside his former property in September 2010. It seemed that the Facebook CEO had finally come to terms with his celebrity status but, only three months after the show aired, Zuckerberg felt the urge to move.Zuckerberg’s new property has already been the talk of the neighbourhood. However, the installation of banks of security cameras before he moved in show that, contrary to how he made his fortune with Facebook, Zuckerberg is determined to ‘Friend’ as few people as possible.It’s true that Zuckerberg, the world’s youngest billionaire at the age of twenty-six, has been restrained in his real estate investments since his rise to fame.In fact, the new home is only a rental and is in the same Palo Alto neighbourhood as his former four bedroomed house.Although only seven blocks away from his previous abode, his new home will make driving to work a little easier; its location is only streets away from Facebook headquarters, where Zuckerberg is said to spend around sixteen hours a day.Zuckerberg’s new home is only slightly bigger than his former and has five bedrooms as opposed to four. The total plot size is not much bigger either, with around three thousand eight hundred square feet; his old home had two thousand three hundred and fifty square feet.Compared with technology moguls Steve Jobs and Bill Gates, the twenty six year old billionaire’s new home is extremely modest. Steve Jobs is currently building himself a new home, valued at US$8.45 million, the single family home will be 4,910 square feet in size, with four bedrooms, a three car garage and a vegetable garden all set on six acres of land.Bill Gates owns a 66,000 square foot mansion overlooking Lake Washington in Medina Washington, valued at US$147.5 million.As you would expect, the impressive property has some state-of-the-art technology built in, such as heated floors and driveways, an estate-wide server system (running a Windows operating system, obviously), guests also get to wear pins that automatically adjust temperature, music and lighting based on the guest's preferences, when they enter a room.Facebook creator and CEO Mark Zuckerberg moved to a new home this week, but only a few blocks away from his old one.Rebecca Smith Ocean Villas Group - http://www.oceanvillasgroup.comMore OVG news..... http://blog.oceanvillasgroup.comLevel 31, 6 Battery Road, Raffles Place, 049909, Singapore

06-18-2020 | Business, Economy, Finances, B …
Business Industry Reports
Video Hosting Sites Market to Witness Growth Acceleration During 2020-2024 With …
The Video Hosting Sites market 2020 report includes thorough gathering of the quantitative analysis of the industry in order to assist players to grow in the market. Perceptions on specific revenue figures generated are also given in the report. This study includes a extensive analysis of the key segments of the industry. This analysis gives us the detail directions of current trends and opportunities in the upcoming era(2020-2024). Global Video
05-24-2020 | IT, New Media & Software
WEBCORE NIGERIA
Coronavirus: Facebook to Eliminate Coronavirus Misinformation
Facebook's creator Mark Zuckerberg tells the BBC's Simon Jack how his social network is reacting to the challenge posed by the coronavirus crisis. "Things like saying something is a proven cure for the virus when in fact it isn't, we will take that down" Facebook and other Big Tech companies met with WHO back in February, and agreed to collaborate to address the coronavirus infodemic. This is absolutely essential for the success
12-06-2013 | Business, Economy, Finances, B …
Magic Logix
Magic Logix CEO Hassan Bawab to Speak at Dallas Digital Summit 2013
Dallas, TX, December 5, 2013 – Hassan Bawab, CEO and Founder of Dallas based Integrated Marketing Agency Magic Logix has recently accepted an invitation to speak at the 2013 Dallas Digital Summit. The conference will take place on December 10 and 11 and The Irving Convention Center in Dallas, TX. Plenty of industry heavyweights will be speaking at the event, including Apple Co-Founder Steve Wozniak, Zuckerberg Media CEO Randi Zuckerberg,
03-01-2012 | IT, New Media & Software
amiando GmbH
amiando welcomes Susanne Zeininger as Chief Sales Officer
Munich – 29th February 2012 – amiando (www.amiando.com), Europe’s leading provider of online event registration and marketing services, has announced the appointment of Susanne Zeininger as the company's new Chief Sales Officer. amiando's award winning services in online ticketing, event management and social media marketing have won international acclaim and the personal recognition of Google's Sergej Brin and Facebook's Mark Zuckerberg. Co-founded by a group of internet entrepreneurs, amiando is one
08-11-2011 | Business, Economy, Finances, B …
Sampark PR
‘Game Changers of India’ in a candid chat with Bloomberg UTV
Mumbai – 10th August, 2011: Bloomberg UTV, India’s premier business news channel, renowned for their innovative and path breaking programming like The Pitch, The Assignment etc. has recently launched “Game Changers” – an alternative view into the lives of mavericks who have not only carved out their own paths, but also set the highest benchmarks in them. Over a series of episodes, Bloomberg UTV looks into the lives of stalwarts
05-12-2011 | Media & Telecommunications
Port-to-Port Consulting
Facebook Dumps Mark Zuckerberg
INDIANAPOLIS—Facebook pulled the plug on Indiana bankruptcy attorney Mark Zuckerberg’s internet Facebook account on Monday, citing false identity as the reason. Obviously, Indianapolis attorney Mark S. Zuckerberg has the same name as Facebook founder Mark S. Zuckerberg, but you would expect Facebook, the internet social-media giant, to have the capability to accommodate two or more people with the same names. Attorney Mark Zuckerberg said, “I was originally denied an account with
Comments about openPR
We publish our press releases on openPR.de because we like people who are "open" - just like us.
Frank Obels, CEO, INCONET - Informationssysteme, Communication und Netzwerkberatung GmbH