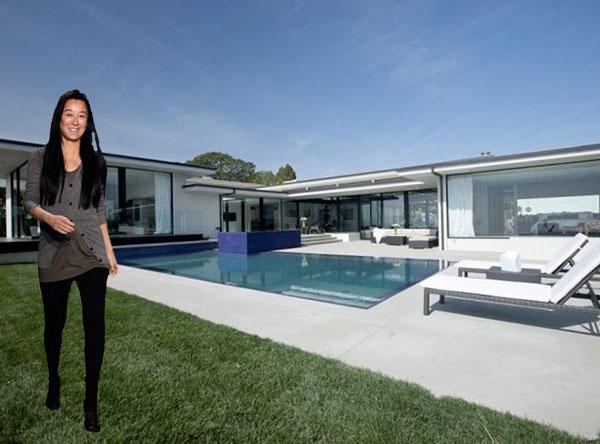 Celebrity New York fashion designer Vera Wang has splashed out US$9.2 million on a Steve Hermann designed property in Coldwater Canyon, Beverley Hills, Los Angeles.Hermann bought the 408m2 house in June 2008 for US$5 million. He spent the next two years completely redesigning and renovating the 1967 built property at a cost of US$3 million.Two new bedrooms were added. The ceilings were raised to a height of 3.6 metres. The original swimming pool was removed and replaced with a sunken, infinity-edge pool and Jacuzzi. And a tiered, thirty seat movie theatre was built.“It was a mid-century modern [property] with good bones, but it hadn't been touched in decades,” Hermann commented.The house has been dubbed “The Glass Mansion” because it features floor to ceiling glass walls to creating a feeling of open space.In fact, from the rear entrance it is possible to see right through the property and take in the view of the Los Angeles basin below.Hermann, who renovates homes for A-list celebrities, put the property back on the market in March 2011, with an asking price of US$10.9 million.Vera Wang is one of America’s best known fashion designers. She is of Chinese descent but was born and raised in New York City. Her parents are from Shanghai, China and migrated to the USA in the 1940s.Originally trained as a figure skater, Wang competed in the 1968 U.S. Figure Skating Championships but failed to make the U.S. Olympic Team. Wang started her fashion career in 1972 as designer for Vogue where she spent the next sixteen years. She then worked with Ralph Lauren for two years, before opening her own design studio at the Carlyle Hotel, New York in 1990.The designer has since made wedding gowns for Chelsea Clinton, Ivanka Trump, Alicia Keys, Mariah Carey and Victoria Beckham.Wang’s dresses have also been featured in US television shows ‘Sex in the City’ and ‘The West Wing’.In 2010 Wang was presented with the Leadership in the Arts Award by Harvard-Radcliffe Asian American Association, for her contribution to costume and fashion design.She has now expanded her brand to include handbags, perfume, jewellery, eyewear, shoes and house-wares.Rebecca Smith is a real estate journalist and author with over 15 years’ experience. She has published 3 books to date:'The Definitive Guide to buying property in Thailand' - http://blog.oceanvillasgroup.com/the-definitive-guide-to-buying-property-in-thailand/'10 simple ways to slash your marketing costs and sell more property' - http://www.ovgmarketing.com/10-simple-ways-to-slash-your-marketing-costs-and-sell-more-property/'The Definitive Guide to buying property in Phuket' - http://blog.phuketoceanvillas.com/the-definitive-guide-to-buying-property-in-phuket/Rebecca is currently the sales director for Ocean Villas Group and Phuket Ocean Villas.Ocean Villas Group Pte. Ltd. Level 31, 6 Battery Road, Raffles Place, 049909, Singapore

09-05-2011 | Industry, Real Estate & Constr …
Ocean Villas Group Pte. Ltd.
Asia Pacific worlds cheapest for building property
The Annual Construction Cost Comparison Report by EC Harris Research has revealed that countries throughout the Asia Pacific region have significantly lower building costs than their counterparts in The West, despite experiencing substantial economic growth. Now in its seventh year, the report compares building costs per square metre in fifty six countries worldwide against construction costs in the South of England. India and Sri Lanka have the lowest construction costs in the
08-31-2011 | Industry, Real Estate & Constr …
Ocean Villas Group Pte. Ltd.
Jade Jagger puts Spanish property up for sale
Spain: The daughter of Rolling Stones frontman Mick Jagger, Jade Jagger, has put her Spanish property up for sale. The seventeenth century farmhouse is located on the North West Coast of the Balearic Island of Ibiza near the village of Sant Joan de Labritja. Dubbed by Jagger as her own “private paradise”, the Spanish property sits on top of a mountain overlooking the Mediterranean Sea. And from its secluded location it’s hard to
08-26-2011 | Industry, Real Estate & Constr …
Ocean Villas Group Pte. Ltd.
Spain cuts new property tax in half to lift Spanish real estate industry
Madrid, Spain: The Spanish Government has cut value added tax on new property in Spain by 50 per cent with immediate effect. The reduction in VAT (Spanish - IVA) from eight per cent four per cent on new build Spanish properties came into force on August 19th and will continue until the end of the year. Announcing the decision Jose Blanco, Minister of Development for Spain, said he hoped the new measures
07-29-2011 | Industry, Real Estate & Constr …
Ocean Villas Group Pte. Ltd.
Jerry Seinfeld selling Colorado property for US$18.25 million
Jerry Seinfeld, the star and co-creator of hit US television show ‘Seinfeld’, has put his Colorado estate on the property market for US$18.25 million. Nestled in the Rocky Mountains and described as “an evolving series of Western ranch structures”, the twenty six acre property boasts eleven bedrooms and fourteen bathrooms. After he bought the estate, Seinfeld ordered a multi-million dollar renovation and expansion of the property. It now has a separate